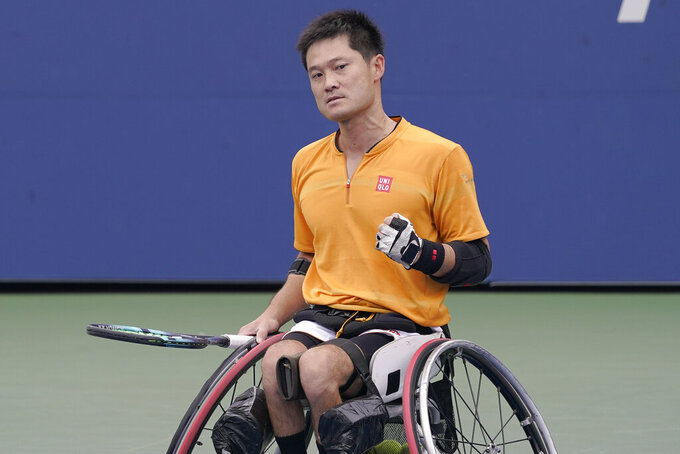 Mary Altaffer, ASSOCIATED PRESS
Shingo Kunieda, of Japan, reacts during a match against Joachim Gerard, of Belgium, during the first round of the men's wheelchair singles at the U.S. Open tennis championships, Wednesday, Sept. 7, 2022, in New York. (AP Photo/Mary Altaffer)

The No. 3 seed fought off a match point in the fourth set and then put away the match that ended at 2:50 a.m. Three previous U.S. Open matches had ended at 2:26.

Alcaraz will face Frances Tiafoe on Friday in the first Grand Slam semifinal for both.

Top-ranked Iga Swiatek has beaten Jessica Pegula 6-3, 7-6 (4) in a women's quarterfinal match in which both players struggled to hold serve.

The players combined for 10 breaks, five by each, in 12 games in the second set before the tiebreaker. Swiatek broke serve seven times in the match and Pegula six.

Swiatek advances to face No. 6 Aryna Sabalenka in the semifinals.

The eighth-seeded Pegula was stopped in her bid for a first major semifinal.

Nick Kyrgios was fined $14,000 for unsportsmanlike conduct after his racket-smashing exit from the U.S. Open.

Kyrgios slammed multiple rackets to the court in frustration following his 7-5, 4-6, 7-5, 6-7 (3), 6-4 loss to Karen Khachanov in the quarterfinals on Tuesday night.

The Wimbledon runner-up racked up $32,500 in fines while in Flushing Meadows, getting penalized five times.

Two days after upsetting No. 2 Rafael Nadal, the No. 22-seeded Tiafoe reached the last four of a Grand Slam tournament for the first time. He will face either No. 3 Carlos Alcaraz or No. 11 Jannik Sinner on Friday.

No American male had reached the semifinals in Flushing Meadows since Andy Roddick lost to Roger Federer in the 2006 final.

De Groot became the first women's wheelchair player to win the Golden Slam last year, when her victory at the U.S. Open followed her wins at the Australian Open, French Open and Wimbledon, along with her gold medal at the Paralympics.

The wheelchair field this year has grown to 56 players, with a purse of $1 million. There is also a junior competition for the first time.

The No. 6 seed matched her best performance at a Grand Slam tournament and will play for a spot in the final against either top-ranked Iga Swiatek or No. 8 Jessica Pegula.

Sabalenka, who lost to runner-up Leylah Fernandez last year in the semis, avenged a loss to the No. 22-seeded Pliskova in the semifinals at Wimbledon in 2021.

Aryna Sabalenka is on the court in search of a second straight trip to the U.S. Open semifinals in the opening singles match of the day.

The No. 6 seed is facing No. 22 Karolina Pliskova, the 2016 runner-up in Flushing Meadows.

They will be followed by American Frances Tiafoe, coming off his upset of No. 2 Rafael Nadal, facing No. 9 Andrey Rublev. The winner will make his first career Grand Slam semifinal.

The night session begins with No. 1 Iga Swiatek facing No. 8 Jessica Pegula, followed by No. 3 Carlos Alcaraz against No. 11 Jannik Sinner in the men's quarterfinals.

Sabalenka is the only 2021 semifinalist left in either draw. She also reached the semifinals last year at Wimbledon, where Pliskova beat her before falling to Ash Barty in the final.