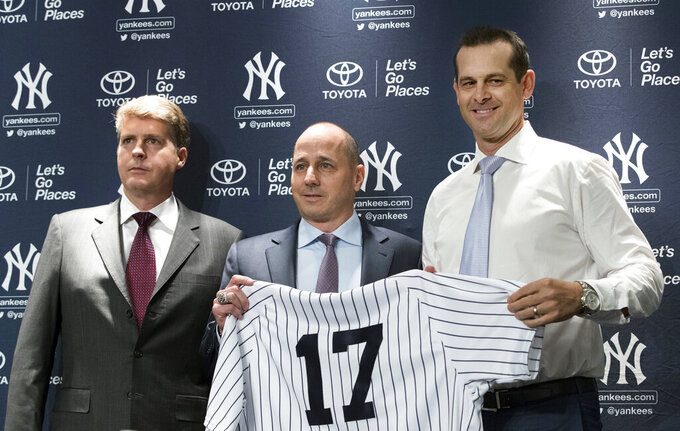 Boone got a three-year contract after New York went 92-70 this season, losing at Boston in the AL wild card game. He is 328-218 with four postseason appearances in four years in the Bronx, but the Yankees haven't won the World Series since 2009.

“Why did I rehire Aaron? ... I think Aaron is one of the better managers in baseball,” Steinbrenner said at the Major League Baseball owners' meetings. “He's extremely intelligent. ... The players want to play for him. They respect him and they want to win for him."

Steinbrenner had similar praise for Cashman, calling him one of the best general managers in the game. Cashman is heading into the last year of his contract, but Steinbrenner said he isn't looking at 2022 as a pivotal year for the franchise's longtime GM.

“I mean, honestly, I’m not thinking that way,” he said. “We’re going to do everything we can like we do every year to field a championship-caliber team.”

New York had one of baseball's deepest lineups in 2021, but it was hampered by injuries and inconsistency. It finished 23rd in the majors with a .237 team batting average and 19th with 711 runs scored.

Steinbrenner said the team plans to embrace technology, biometrics and performance science more than it has in the past in an effort to help fix the offense. A return to form for Joey Gallo also could help.

“Do I wish he had performed a bit better? Yes, of course,” Steinbrenner said. “But I'm not worried. You watch him next year.”

New York also was hurt by a tough finish for ace right-hander Gerrit Cole, who was 1-1 with a 7.64 ERA in his last three starts after returning from left hamstring tightness and lost the wild card game, allowing two homers and three runs while lasting two innings.

Cole signed a $324 million, nine-year contract in December 2019. Steinbrenner brushed off Cole's shaky finish, attributing it to the hamstring injury and possibly the lingering effects of COVID-19.

Steinbrenner also said he is open to a long-term contract for Judge, who is eligible for free agency after next season. The 29-year-old Judge batted .287 with 39 homers and 98 RBIs in 148 games this year.

“He's a great Yankee,” Steinbrenner said. “He's one of the faces of the franchise. He's a great leader, great in the clubhouse. It's definitely something I'm willing to talk to Cash about, but nothing formal's happened yet.”