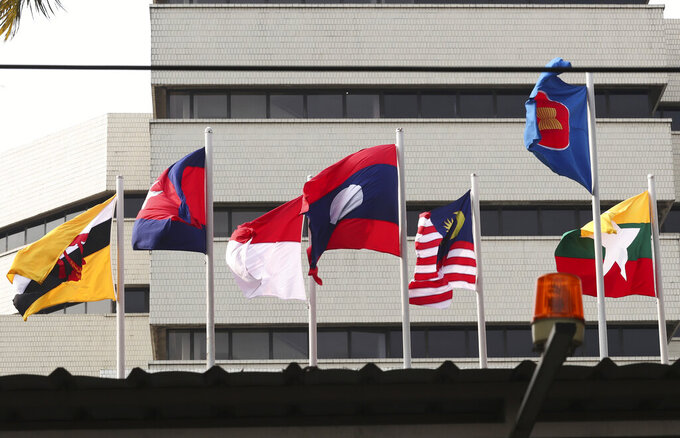 Tatan Syuflana, ASSOCIATED PRESS
FILE - In this April 22, 2021, file photo, flags of member countries fly at the ASEAN Secretariat in Jakarta, Indonesia. Southeast Asian leaders are meeting on Oct. 26-28, 2021 for their annual summit where Myanmar’s top general, whose forces seized power in February and shattered one of Asia’s most phenomenal democratic transitions, has been shut out for refusing to take steps to end the deadly violence. (AP Photo/Tatan Syuflana)

KUALA LUMPUR, Malaysia (AP) — Indonesian President Joko Widodo has urged Southeast Asian countries to speed up plans to create a regional travel corridor to help revive tourism and speed up a recovery from the economic damage of the pandemic.

Citing U.N. and World Trade Organization data, Widodo said Monday that the level of restrictions in Southeast Asia was the highest in the world. With coronavirus cases in the 10-member Association of Southeast Asian Nations now declining, those limits should be eased to allow people to travel more freely, he said.

Speaking at a regional business forum Widodo urged immediate adoption of a regional travel corridor, a concept initiated by Indonesia in 2020, that would include faster immigration lanes, recognition of vaccine certificates and standardized health measures for departure and arrival, among other things.

“After 20 months of facing the daunting COVID-19 pandemic, we now see a light of hope. In the past week, COVID-19 cases in ASEAN fell by 14%, far exceeding the global average, which fell by 1%.,” he told the forum organized ahead of a three-day ASEAN leaders summit, which starts Tuesday.

“With the COVID-19 situation getting more under control, these restrictions could be eased, mobility could be relaxed, while also ensuring that it’s safe from the risk of the pandemic," he said.

“If all ASEAN countries immediately facilitate the safe mobility of people, the wheels of economy shall soon run again," he said.

Intra-ASEAN travel typically accounts for around 40% of travel in the region and is key to reviving tourism in the region.

Some countries, including Thailand, are cautiously moving to reopen to international tourism.

Indonesia re-opened its holiday resort island of Bali to foreign tourists this month after more than 80% of its population was fully vaccinated. Widodo said the government will gradually open up other areas in the country where vaccination rate exceeds 70%. Indonesia so far has fully vaccinated about a third of its people.

Widodo called for more equal distribution of vaccines to ensure that at least 70% of ASEAN's more than 600 million people are inoculated. Vaccination is uneven in the region, with Singapore, Malaysia and Cambodia moving the fastest with over 70% of their population inoculated and Myanmar at the bottom with less than 10% vaccinated.

“Our rapid steps together in handling health challenges, reactivation of safe travels, as well as acceleration of a fair digital economy, will become our common gateway to recover and advance together," he added.

ASEAN leaders will hold a three-day annual summit from Tuesday. Myanmar’s top general, whose forces seized power in February, was not invited after failing to take steps to end the deadly violence that followed the military takeover.