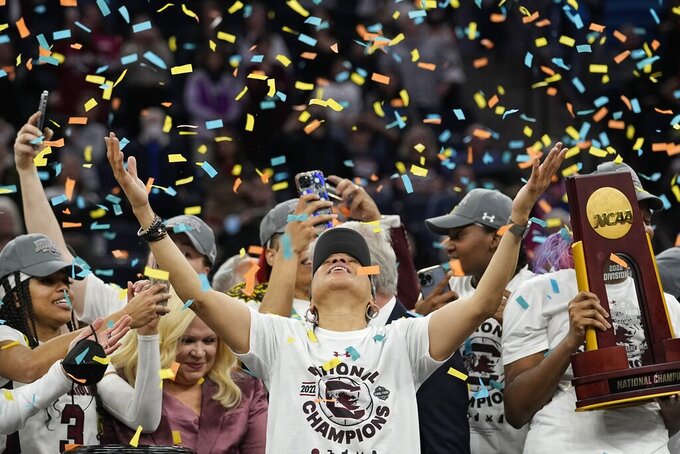 In the weeks before the NCAA Women’s Basketball Tournament, the big focus was on improving the experience for players, including expanding the “March Madness” branding to the event for the first time.

Broadcast rights and the millions of dollars attached to them will soon become more of a priority.

The NCAA championships package — which includes the women’s tournament and 28 other title events, though not the men's tourney — expires in August 2024. That means the bidding process for whatever packages the NCAA decides to market would likely begin next fall.

ESPN currently pays $34 million per year for that package of 29 events, which it agreed to in 2011. The Kaplan Report, which was commissioned by the NCAA after glaring inequities between the 2021 men's and women's tournaments were brought to light, estimated that the women's tournament could have a market value of $96 million to $101 million per year as a separate package.

Will the NCAA try to sell the event as its own product? It is a question on the minds of many in the women's game, including South Carolina coach Dawn Staley who wants to see tournament teams cash in just like the men.

NCAA President Mark Emmert said last week before the Final Four that all options are on the table.

“We’re heading into just the right period to be looking at and determine the best approach going forward for a new contract,” he said. “Whether that’s splitting up sports, whether that’s keeping some of it together, we’ll have to determine that, and we’ll have to work with outside experts, as we always do, who provide the necessary data and expertise in all of that.”

South Carolina’s 64-49 victory over Connecticut on Sunday night averaged 4.85 million viewers on ESPN, making it the most-watched women’s championship game since 2004. It was also the fourth-largest audience for the title game since the network began airing the entire tournament in 1996.

The tournament overall averaged 634,000 viewers per game, a 16% increase over last year, with many of the rounds seeing their highest averages in more than 10 years. This was the second year that all games aired on at least one channel nationally instead of going to regional audiences.

It was also the second year that ABC aired four games the first weekend of the tournament while ESPN introduced an alternate feed for the Final Four weekend on ESPN2 with Sue Bird and Diana Taurasi providing commentary. The championship game aired at 8 p.m. Eastern; in previous years, tipoff was at 6 p.m. so the game would precede “Sunday Night Baseball”. That wasn't the case this year after the basetball season was delayed due to the lockout.

The next step could be for the title game to air on ABC, which, like ESPN, is owned by Disney. Rebecca Lobo, a former UConn star and longtime analyst on ESPN, said it is more of a question of when rather than if.

“It’s moving in the right direction. As a women’s basketball fan, that’s my hope, because I know it rates higher, draws a bigger audience and it’s a bigger platform," she said. "Ideally, to me, that’s where our biggest game would be.”

Advertising inventory sold out a month before the tournament started and included 14 sponsors and 22 advertisers. Disney Advertising’s Deidra Maddock, the vice president of sports brand solutions, also pointed out that nearly two million brackets were filled out on the ESPN Women’s Tournament Challenge page.

Having the first two weekends go Friday through Monday, instead of Saturday through Tuesday as had been the case in previous years also helped with increased attendance and ratings. While Connecticut coach Geno Auriemma was not happy about playing a regional final on a Monday before playing in the Final Four four nights later, it could have been worse if the last two regional finals were on a Tuesday.

UCLA coach and Women’s Basketball Coaches Association President Cori Close said a possibility would be to have the first two weekends go Thursday through Sunday, just like the men's tournament. While the Kaplan Report suggested playing on days the men's tournament is off, a Sunday through Wednesday model would be a detriment to players as well as attendance and ratings.

Another idea from the report that isn't getting much traction is having one or two networks have both the men's and women's tournament. The CBS/Turner deal with the men's tournament runs until 2036 and the idea of two networks having to possibly program 32 games in one day — 16 each for men's and women's in the first round — wouldn't make it feasible.

Tag Garson, Wasserman’s senior vice president of properties, said the biggest key to any upcoming rights deal is making sure there is flexibility in adapting to a changing media landscape.

“A few years ago, there wasn’t a Paramount Plus, Disney Plus or Peacock. There is something to be said for having stability, in an age within collegiate athletics or intercollegiate athletics that there hasn’t been as much stability recently," Garson said. “But at the same time, if anybody can tell you where media is headed in the next decade, I have a bridge to sell you.”

That uncertainy is certainly a factor for the NCAA, which is under scrutiny when it comes to improving gender equity even as it overhauls its very approach to governing more than 1,200 member schools with nearly 500,000 athletes.

“That’s our big quest. How do we find the best intersection between attendance, TV ratings, corporate sponsorship, student-athlete welfare and competitive equity, and where do all those circles of priorities converge?” Close asked. “There are times where things need to be exactly equal. But there are other times where we just want a chance to be successful in our own landscape.”