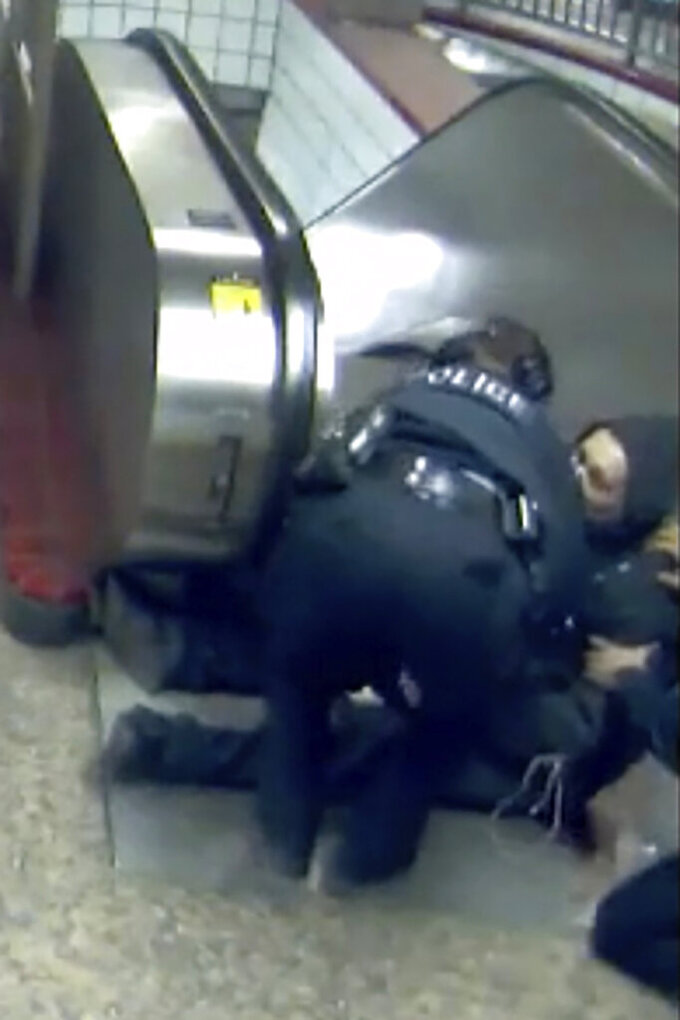 Uncredited, ASSOCIATED PRESS
FILE - In this Feb. 28, 2020, image from Chicago Transit Authority video provided by the Civilian Office of Police Accountability, police officers attend to Ariel Roman, bottom right, after he was shot by Chicago police in a subway station in Chicago. Chicago Police officer Melvina Bogard, who shot Roman, an unarmed man, in the back as he tried to escape capture by running up an escalator last year has been charged with felony aggravated battery with a firearm and official misconduct, prosecutors said Thursday, Aug. 5, 2021.  (Chicago Transit Authority via AP File)

CHICAGO (AP) — A Chicago police officer who shot an unarmed man in the back as he tried to escape capture by running up an escalator in a busy subway station has been charged with felony aggravated battery with a firearm and official misconduct, prosecutors said Thursday.

The Cook County State's Attorney's office said in a news release that Melvina Bogard, 32, turned herself in to investigators on Thursday morning and at an afternoon bond hearing, Cook County Judge Susana Ortiz ordered that she be released on her written promise to appear in court. Her next court hearing was scheduled for Aug. 18.

The shooting happened in February 2020 at a downtown station. Bogard and another officer were pursuing Ariel Roman, a short-order cook who was suspected of violating a city ordinance by walking from one train car to another.

Cellphone video shot by a bystander that was made public almost immediately received national attention, as did footage from police body cameras and Chicago Transit Authority surveillance cameras released two months later. The footage shows officers chasing Roman and Bogard shooting him at the foot of the escalator and then shooting him the back from about 10 feet away.

In a court document read during Thursday's hearing, prosecutors said Bogard and the other officer, Bernard Butler, were riding the train when they saw Roman move between cars while the train was in motion, in violation of a city ordinance. The officers asked Roman to get off the train and on the platform he told them he had anxiety issues and moved from car to car because someone was bothering him.

Bogard shot Roman once in the chest or abdomen during that struggle, then shot him from behind in the buttocks or hip when Roman ran up the escalator, prosecutors said.

An attorney for Roman, Andrew Stroth, said in a statement that he hopes the charge would prompt the city to “take responsibility and resolve” the lawsuit.

The announcement of charges was not surprising given the actions of the then-police superintendent and the comments made by his spokesman and the mayor after the shooting.

Interim Superintendent Charlie Beck signaled his concern almost immediately and took the unusual step of requesting that prosecutors be sent directly to the Red Line L station where the shooting occurred.

At the time, Anthony Guglielmi, Beck's spokesman, said that while the superintendent “doesn’t want to rush to judgment,” the incident raised significant tactical concerns about the officers' actions.

Mayor Lori Lightfoot expressed her support for Beck’s decision to send prosecutors to the scene as well as her concerns about what she called the “extremely disturbing” cellphone video.

Also, while officers involved in a shooting are always immediately placed on desk duty, Beck took the unusual step of stripping them of their police powers pending the outcome of an investigation.

If anything, those concerns only deepened when, a couple of months later, extended security and body-camera video was also released, showing Bogard shooting Roman in the back on the escalator.

In April this year, Police Superintendent David Brown recommended to the police board that Bogard be fired. On Thursday, the department said the police board has not yet made a decision and declined to comment on her arrest.

While police officers in Chicago rarely face criminal charges for on-duty shootings, it has happened. Most famously, in 2015, Officer Jason Van Dyke was charged with murder in the 2014 shooting of Black teenager Laquan McDonald. In 2018, a jury convicted Van Dyke of second-degree murder.