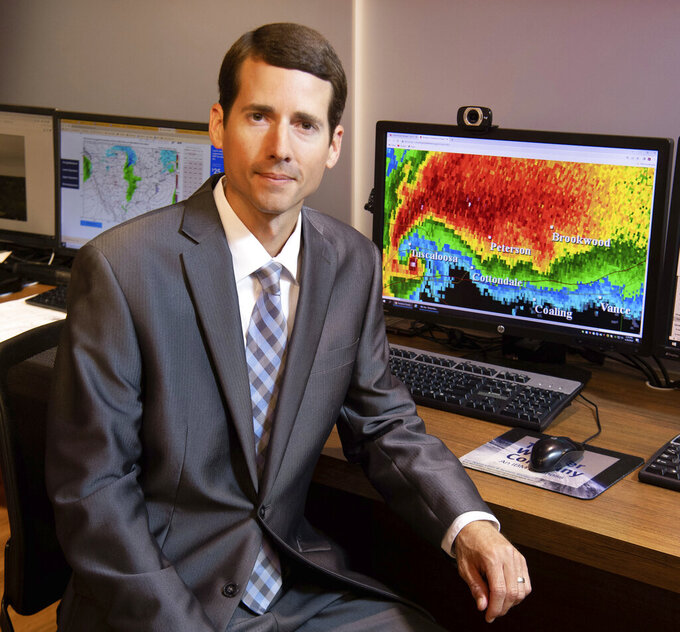 TUSCALOOSA, Ala. (AP) — In the 11 years since a devastating tornado outbreak struck Tuscaloosa, social media has evolved into a lifesaving tool during periods of severe weather, said Richard Scott, WVUA 23 News’ chief meteorologist.

Scott said he believed the event was a “game-changer” for social media, since most of its uses before the April 27, 2011, storm were centered on entertainment.

The bottom line is that social media applications — Twitter, Facebook and Instagram — have expanded weather forecasters’ ability to warn people about upcoming severe weather, keep them updated during a storm and spread the word about where damage has occurred afterward.

“It’s a frightening thing, not knowing where (the tornado) is, what’s the moment it’s going to hit, and you’re kind of waiting for that to pass and then you know, you’re OK,” Scott said.

Social media was still in its infancy in 2011 when an EF-4 tornado carved a 5.9-mile path of destruction through Tuscaloosa, damaging an estimated 12% the city and causing or contributing to the deaths of 53 people. The storms that day were part of an outbreak of 62 tornadoes in Alabama.

Back then, people mainly received severe weather information through TV or radio, but widespread power outages that day left many people with no way to receive storm-related updates.

But now, with more people using smartphones and the rise of streaming applications like Facebook Live, Scott said the loss of power doesn’t have to interrupt the flow of information during severe weather.

“Since Facebook Live was created, that is such an incredible asset for us. Because we can get information out in real time. If you lose power, guess what, you got Facebook Live, or we stream on our website, too. So there’s several platforms you can get us,” Scott said.

He said smartphones have also become beneficial during severe weather because the devices allow people to receive information wherever they are at any given time during a storm.

“So, it’s got to the point where if people are traveling, if you’re out of town, if you’re not around television, or if you lose power, that is a huge asset to have. Because there’s nothing more scary than being in a different area and you don’t have the ability to watch us on TV and a storm’s coming,” Scott said.

Radar technology has also advanced since 2011, Scott said. For instance, the correlation coefficient tool allows meteorologists to detect when storms are producing debris. Other technological advances have helped meteorologists improve their ability to forecast potential tornadoes and predict when tornado warnings are likely to be issued, so people have more time to take cover.

While some Tuscaloosa area residents may have developed “storm phobia” because of the destruction of April 27, 2011, Scott said it’s important to remember that tornado outbreaks like that one are rare.

However, Scott said people should always be prepared during times of severe weather because it only takes one tornado to threaten your life and property. Scott said he often reflects on the Dec. 16, 2000, tornado as a reminder of how destructive just one tornado can be. That tornado killed 11 people and injured 144 in Tuscaloosa.

So, when it comes to severe weather, Scott said it’s better to be safe than sorry.

Scott has worked with WVUA 23 since 2007 and he was promoted to a chief meteorologist position in 2010, just a few months prior to the April 27, 2011, tornado. He covered the tornado outbreak from the television station’s studio inside Bryant-Denny Stadium. The Linden native said he was on-air before soon realizing the storm’s path was heading toward his home in Tuscaloosa.

“I was doing the math in my head and thinking that, you know, this thing is probably a mile wide. And I was thinking how far away I lived from the stadium, and from where we were broadcasting from. So, I was thinking, man, this is going to be close,” Scott said.

Scott’s home was destroyed in the storm that day. However, Scott said he was thankful that he and his then fianceé Tara Robinson, who also lived in the Tuscaloosa area, were safe.

“It was a high-impact event. It was a day that every storm that developed was producing a tornado. Many of those were large, violent tornadoes. That was a unique situation,” Scott said. “Fortunately, we’ve had some big (severe weather) events since then, but not to that extent.” Scott said.