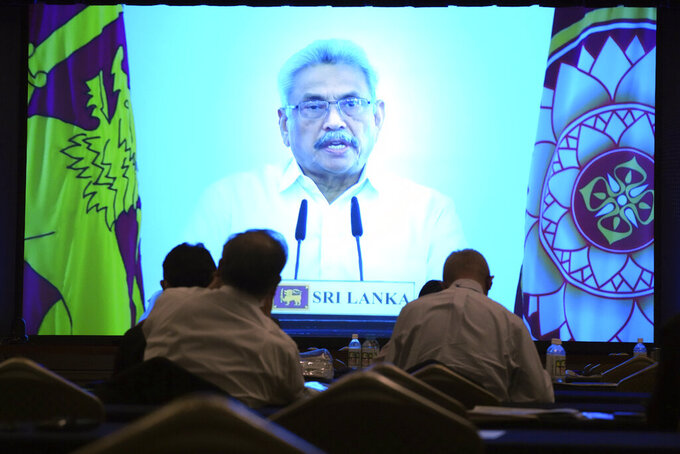 Eugene Hoshiko, ASSOCIATED PRESS
Participants look at Sri Lankan President Gotabaya Rajapaksa's pre-recorded speech shown on a screen at a session of the International Conference on "The Future of Asia" Thursday, May 26, 2022 in Tokyo. (AP Photo/Eugene Hoshiko)

“We are presently undergoing a severe economic crisis that has profoundly impacted the lives of all Sri Lankans, resulting in social unrest,” Rajapaksa said in a video message to an international conference in Tokyo.

“We urgently require the assistance of our friends in the international community" to ensure that our immediate needs such as medicine and food supply are met, he said.

For months, Sri Lankans have been enduring shortages of necessities because of the country's lack of foreign currency to pay for imports. The government has halted repayments of its foreign debt.

Attacks on peaceful protesters by government supporters triggered countrywide riots in which nine people died, including a lawmaker, and 200 were hurt. Homes and properties of government ministers and their supporters were burned. The crisis has nearly dismantled Rajapaksa's family dynasty after his brother, Mahinda Rajapaksa, resigned as prime minister.

In his comments at the “The Future of Asia” conference organized by Nikkei Inc., the president blamed the economic crisis on the virtual shutdown of Sri Lanka's tourism industry and a sharp decline in money repatriated by overseas Sri Lankan workers because of the pandemic, and rising world inflation.

He said other nations could also be affected the “long-tail effects of the COVID-19 pandemic.”

“Supporting such vulnerable nations through these difficulties is essential for regional as well as global stability,” he said.