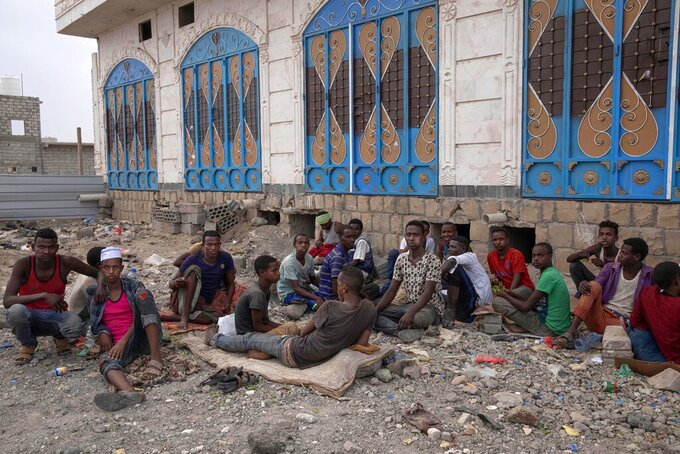 The U.N.'s migration agency said in a statement the overcrowded vessel carrying around 30 East African migrants departed eastern Djibouti for Yemen’s west coast on Oct. 30. Witnesses who spoke with the International Organization for Migration said the small raft was soon overpowered by “high tides and rocky waters” and quickly sank. Three bodies were recovered, it said.

So far this year around 54,000 migrants have departed the Horn of Africa for the Gulf Arab states, according to United Nations statistics. Most cross Bab-Al Mandab, the 31-mile (50-kilometer) strait separating Djibouti and Yemen, in small boats controlled by a network of people smugglers. Many migrants have drowned trying to make the eastward crossing, with rights groups accusing smugglers of previously throwing people overboard to lighten the weight load.

Nearly all the migrants arriving in Yemen are East Africans aiming to cross the border into neighboring Saudi Arabia and then move on to other Gulf states in search of work. However, few complete the journey. An estimated 43,800 migrants are thought to be stranded in war-ravaged Yemen, where they are often detained, forcibly enlisted as fighters by Yemeni’s warring factions, or even killed in the crossfire.

Yemen’s ruinous conflict began in 2014 when Iran-backed Houthi rebels swept down from the mountains and seized the capital of Sanaa along with much of northern Yemen. A Saudi Arabia-led coalition that included the United Arab Emirates intervened the next year in a bid to reinstate the internationally recognized government to power.

The failure to extend Yemen’s nationwide truce at the start of October threatens to reignite the bloody civil war following a six-month lull in front-line fighting. The Middle East proxy war waged between Saudi Arabia and Iran has killed more than 150,000 people, according to the Armed Conflict Location & Event Data Project, becoming one of the world’s worst humanitarian crises.

Most African migrants arriving on Yemen's western shores are fleeing enduring conflicts, famine and authoritarian regimes that have long gripped numerous countries across the Horn of Africa, including Somalia, Eritrea and Ethiopia.

Mass draughts across central Somalia have forced some 1 million Somalis to migrate over recent months. Ethiopia has been rocked by conflict since November 2020, following a dispute between the Ethiopian government and the Tigrayan rebel forces over control of northern Tigray. The two sides agreed to a cessation of hostilities last week.