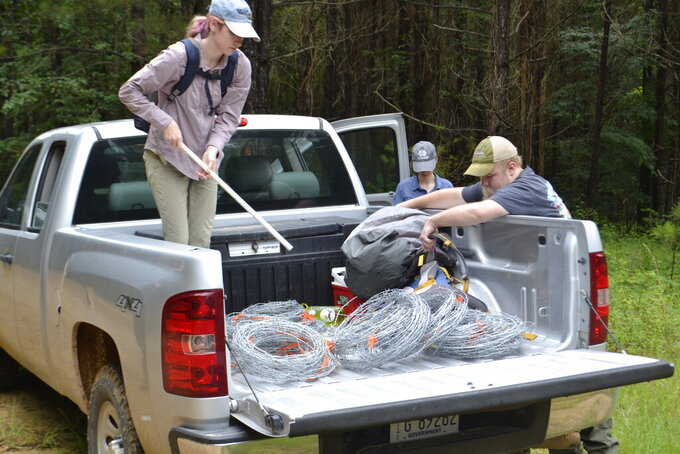 LIBERTY, Miss. (AP) — On June 2, Tom Lewis left his office at Liberty Insurance Agency to serve as guide for a group of bear hunters.

In this case, the “hunters” were researchers from Mississippi State University involved in a regional project tracking the animals’ movements in Mississippi, with Amite County being one of their new areas of focus.

Coincidentally, their visit came just weeks after a 450-pound black bear made the rounds in the county’s Ducktown community.

Lewis gave the researchers a tour of a huge swath of woodland south of Liberty, including the area where the recent bear passed.

PhD student Lacy Dolan said her team picked Amite County “because of its proximity to Louisiana, and Louisiana has a good population of bears.”

Lewis took the gang to cutovers, pine stands and hardwood bottoms along the Amite River.

“There are a lot of berries coming in,” Dolan said. “That’s good. They tend to kind of follow the food, and they tend to range kind of widely.”

Dolan has already been studying bear movements in numerous other counties, including Wilkinson. Now the animals appear to be moving out into places like Amite County.

Lewis, a cattleman as well as businessman, said such studies are useful for residents.

“Landowners want to find out what to do before they (bears) become a problem like hogs,” he said.

“In Canada they have a lot of bears, and people like them,” she said.

“Mostly it’s a lack of knowledge,” Lewis said. “People are scared of the unknown.”

With the exception of an occasional nuisance animal, “for the most part they avoid human areas,” Dolan said.

During Lewis’ road tour, Dolan kept careful track of likely sites on map and GPS. Then Lewis returned to his office while Dolan and her team set out to establish four survey sites.

She, along with assistants Carly Haywood, Thomas Rovery and Jacob Thacker, pulled over at the edge of a pine forest and began assembling rolls of barbed wire and other materials.

They trekked a short distance into the woods, looking for a flat site amid evenly spaced trees.

They cleared out undergrowth like devil’s walking stick, American beautyberry and sawbriar. Next they strung two strands of barbed wire around three trees in a triangle shape, and tied twine head-high between trees.

Later they will hang a biodegradable bag of doughnuts from the twine — too high for wild hogs to reach — along with a cotton pad soaked with raspberry scent to draw a bear in.

The idea is for the bear to snag some of its hair on the barbed wire while entering the pen. The set-up is called a “hair snare.”

Researchers will then gather the hair for genetic testing.

Once the wire was strung, Dolan ran a blowtorch along it.

“Because we used this wire last year, we treat it with a torch to get rid of any residual DNA,” she said.

Genetic testing of hair will help identify individual animals and even provide information about their diet.

Researchers will compare the DNA with that from Louisiana and Arkansas bears.

“That will help us know where they came from, get an idea of their travel routes,” Dolan said.

After the sites are baited, her team will check them every week or two.

Not that bears always cooperate.