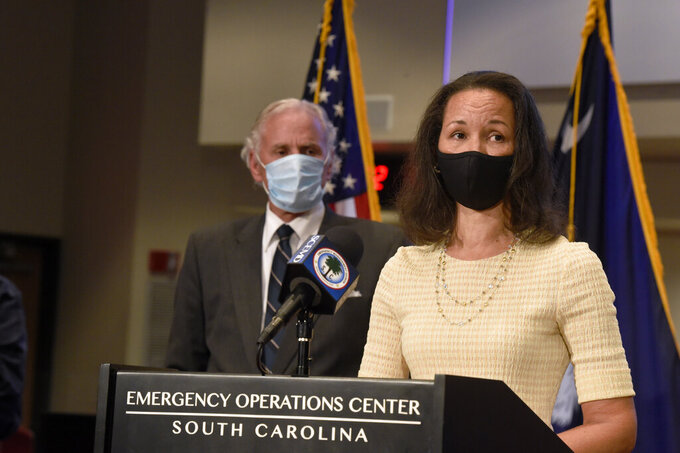 But one of the Department of Health and Environmental Control's top public health experts shied away Wednesday from recommending mask mandates, which lawmakers have already banned from public schools this year.

“Our message will stay the same and our job is to offer the best recommendations to protect the people of South Carolina," State Epidemiologist Dr. Linda Bell told reporters. “Ultimately, DHEC will adhere to state laws.”

The health agency's stance comes a day after education officials said the state can't follow new CDC guidance recommending indoor mask use in schools regardless of vaccination status. State legislation went into effect this month that bars school districts in South Carolina from using appropriated funds “to require that its students and/or employees wear a face mask.”

On Wednesday, Gov. Henry McMaster doubled down on his own support of the ban, noting that schools can't get through any hypothetical loopholes by using other funding to enforce such a mandate.

McMaster added that some experts have failed to listen to parents in the debate around how to best keep schools running during the pandemic. He has previously called it “the height of ridiculosity” for a school district to require a mask over any parent’s wishes that their child go without one.

Vaccination rates remain among the lowest in the country, with just over 44% of eligible residents having been fully immunized, according to data updated Monday by state health officials.

And COVID-19 cases are climbing again in South Carolina, with a 92.6% jump in cases over the last week, the agency reported.

Since South Carolina first shut down in March 2020, the Republican governor has resisted calls to implement a statewide mask mandate, instead emphasizing personal responsibility in following public health suggestions and getting vaccinated. He has repeatedly defended the state's approach to keeping most businesses open and limiting other virus restrictions.

“If we listen to the national press and some of the so-called experts in their dissemination of hysteria, hyperbole and exaggeration, everybody would be scared to death,” McMaster said. “I say do not listen to that. Listen to competent sources.”

Schools in the state are awaiting updated safety guidelines from the state's health agency, which says it will put out the recommendations later this week.

Districts can still provide masks for students to wear, Bell noted Wednesday, though they can’t compel students to put them on. Health officials are also working with schools on vaccination clinics to get students fully protected before the start of the semester, Bell said.

The new federal guidance also recommends that even the vaccinated should return to wearing masks indoors in parts of the country where the delta variant is rapidly spreading. That includes 41 of South Carolina's 46 counties so far.

Still, towns and cities looking to reinstitute their own mask mandates must also navigate around an executive order issued by McMaster in May, which said that local governments can't use any of McMaster's prior COVID-19 emergency declarations as the basis for a mask mandate. Those governments will have to find justification for such mask rules within their own ordinances.

The 74-year-old governor said he himself would not follow the federal guidance of masking indoors, given that he is vaccinated and already contracted COVID-19 at the end of last year.