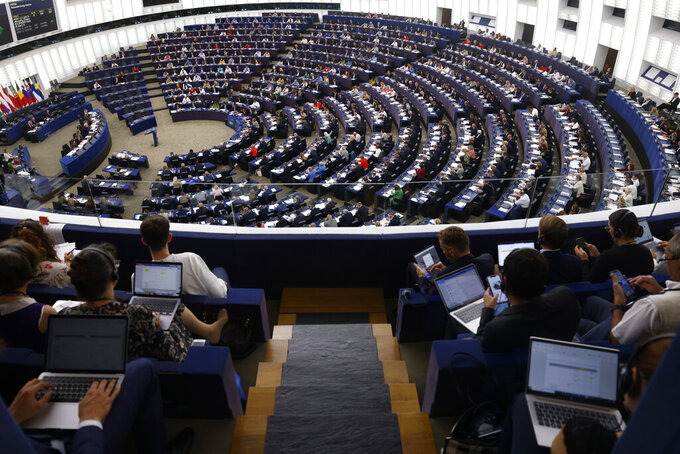 Jean-Francois Badias, ASSOCIATED PRESS
FILE - European Parliament members meet in a plenary session on Wednesday, Sept. 14, 2022, in Strasbourg, eastern France. European Union lawmakers on Thursday, Sept. 15, 2022 said that Hungary's nationalist government is deliberately trying to undermine the bloc's democratic values and they deplored the failure of the 26 other EU countries to take action that would bring the country back into line. (AP Photo/Jean-Francois Badias, File)

BRUSSELS (AP) — European Union lawmakers on Thursday declared that Hungary has become “a hybrid regime of electoral autocracy” under the leadership of its nationalist government, and that its undermining of the bloc’s democratic values had taken Hungary out of the community of democracies.

In a resolution that passed 433-to-123 with 28 abstentions, the parliamentarians raised concerns about Hungary’s constitutional and electoral systems, judicial independence, possible corruption, public procurement irregularities, LGBTQ+ rights, as well as media, academic and religious freedoms.

The lawmakers said that Hungary — which its populist Prime Minister Viktor Orban characterizes as an “illiberal democracy” — has left behind many of the democratic values of the bloc. In part, they blamed the other 26 EU member countries for turning a blind eye to possible abuses during Orban's 12 years in office.

The vote is the latest in a series of showdowns between the EU's institutions and Orban's government in Budapest. The bloc's executive arm, the European Commission, is expected to announce Sunday that it is prepared to suspend payments of some EU money to Hungary over its alleged violations.

The French Greens parliamentarian who chaperoned the resolution through the assembly, Gwendoline Delbos-Corfield, said “for the first time, an EU institution is stating the sad truth, that Hungary is no longer a democracy.”

In the text, the lawmakers condemned “the deliberate and systematic efforts of the Hungarian government to undermine the founding values of the Union.”

The vote is highly symbolic in that it sets Hungary apart from other EU countries in its alleged failure to uphold values enshrined in the EU treaty like “respect for human dignity, freedom, democracy, equality, the rule of law and respect for human rights, including the rights of persons belonging to minorities.”

But the vote, which came during a plenary session in Strasbourg, France, doesn't impose any penalty on Orban’s government, nor does it bind other EU countries into taking any particular actions.

Delbos-Corfield said Orban and the ruling Fidesz party “have put their time and effort into tearing apart the fabric of democracy and ripping up the rule of law instead of supporting their citizens.”

“The costs for Hungarian citizens are clear: They are having their rights removed and opportunities undermined, all while their state is stripped apart by autocrats and oligarchs,” she said.

Hungary's foreign minister, Peter Szijjarto, said Thursday during a news conference in Budapest that Hungarian voters had “decided in four parliamentary elections in a row what kind of future they want for the country” by electing Orban and his party.

“We resent that some people in Strasbourg and Brussels think that the Hungarian people are not mature enough to decide their own future,” Szijjarto said.

Hungary has long been on a collision course with its European partners. It has routinely blocked joint statements, decisions and events, ranging from high-level NATO meetings with Ukraine to an EU vote on corporate tax and a common EU position on an Israeli-Palestinian cease-fire.

Members of the European Commission are meeting Sunday, when they are expected to announce a cut in Hungary's EU funding unless it takes action to end its democratic backsliding.

Budget Commissioner Johannes Hahn said says suspending around 70% of the funding to Hungary in some EU programs, notably related to public contract procurement, “can be considered proportionate.” It's unclear how much money that would involve.

A full suspension of EU funds is unlikely. Any action must be approved by the member countries, and this requires a “qualified majority,” which amounts to 55% of the 27 members representing at least 65% of the total EU population. Some EU lawmakers have expressed concerns that if Italy's far right wins the country's Sept. 25 election it could be difficult to establish that majority.