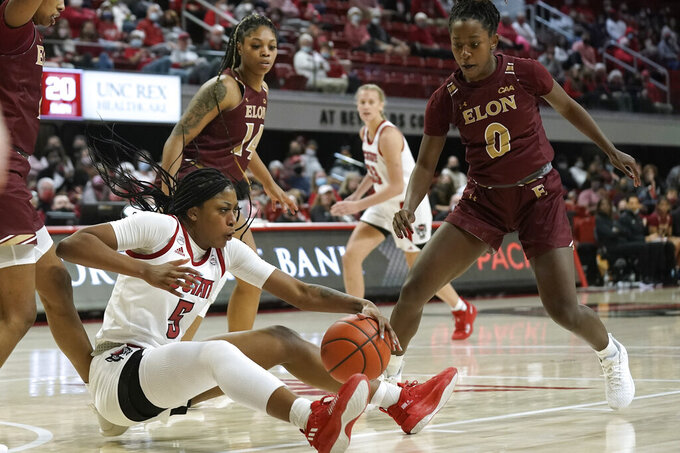 The Wolfpack (8-1) lost their season opener to No. 1 South Carolina and haven't been stopped since then.

“Our first game, we had to get our jitters out,” Boyd said. “But as the season goes along, we’re just going to get better and better.”

The Wolfpack led 16-9 after one quarter despite five turnovers, then started the second period with an 8-0 spurt to break away. The Phoenix (5-2) never cut the deficit to single digits after that.

N.C. State shot 51% from the field and hit nine 3-pointers, two off of a season high.

Kayla Liles led the Phoenix with 12 points, while Elon was held to just 27.8% shooting overall.

Elon: The Phoenix’s two defeats this season have come against what are currently the top two teams in the country — South Carolina on Nov. 26 and the Wolfpack. Elon lost by 41 points to the Gamecocks but has impressed elsewhere in its non-conference schedule, winning five games by an average of 14.2 points.

“It’s quite the feat to play No. 1 and No. 2 within a two-week stretch,” coach Charlotte Smith said. “But we’re always up for the challenge. I’m very proud of our team, I felt like they went out and fought for 40 minutes.”

N.C. State: During their winning streak, the Wolfpack have beaten then-No. 2 Maryland on Nov. 25 and No. 6 Indiana on the road last Thursday.

“We weren’t full force (against the Gamecocks), but that’s part of it,” coach Wes Moore said. “And I’m proud of the way we’ve rebounded. We played a brutal schedule, and they’ve weathered it really well.”

Leading 36-20 at the break, the Wolfpack shot seven of 11 in the third quarter and scored 25 points to put the game out of reach. Seven N.C. State players recorded a field goal in that 10-minute stretch alone, while the Phoenix were held to 3-11 shooting.

The Wolfpack have done everything possible to get back into the “top team in the country” conversation since the Nov. 9 loss. Moore’s team beat heavyweight Maryland by 18 points, and its only single-digit win this season came Thursday against the Hoosiers, 66-58.

Elon: The Phoenix have a week off before facing Davidson on Sunday.

N.C. State: The Wolfpack will open conference play at Pitt on Friday.