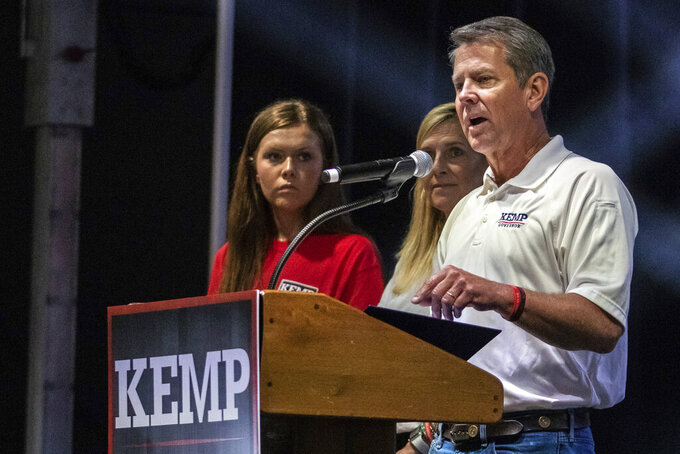 ATLANTA (AP) — The city of Atlanta and Georgia school districts announced mask mandates Wednesday even as Gov. Brian Kemp repeated his vow that he won’t impose a statewide mask rule or restrict business and public activities.

Infections and hospitalizations from COVID-19 in Georgia continued to rise steeply Wednesday.

“Georgia will not lock down or impose statewide mask mandates,” Kemp tweeted on Wednesday, repeating a stance that has remained consistent since the Republican lifted closures early in the pandemic.

“Public health experts overwhelmingly agree, and data has proved, that wearing a face covering helps slow the spread of this deadly virus,” Bottoms said in a statement.

She ordered that city buildings remain closed to the public. Atlanta City Hall has been closed to non-employees since the start of the pandemic but was scheduled to fully reopen Aug. 9.

Kemp tried to use his powers under the public health state of emergency to keep cities and counties from issuing their own mask rules, suing Atlanta to try to block its mask mandate. That showdown ended in a compromise in which Kemp said cities and counties could require face coverings if infections were above a certain level. Kemp did not challenge school rules last year. The public health state of emergency expired July 1.

Additional school districts continued to announce Wednesday that they will require students and employees to wear masks, with the share of Georgia public school students covered by mask mandates now above 30%, according to Associated Press calculations.

Nearly 4,000 positive COVID-19 tests were reported Wednesday by the state Department of Public Health. That continued a sharp upward trend in newly reported cases. The last time Georgia reported more than 4,000 cases was on Feb. 11.

The share of positive molecular tests was above 12% for the third day in a row, far above the 5% level that experts say indicates most cases are being detected.

The number of hospitalized patients also continued to spike. The number of confirmed COVID-19 patients statewide rose to to 1,674 on Wednesday from 1,501 on Tuesday. More than 10% of all patients now hospitalized in Georgia for any reason have COVID-19.

Rural hospital regions around Waycross and Dublin have seen more than twentyfold increases in the number of COVID-19 patients since July 5.

At least 15 school districts statewide have announced new mask mandates or reaffirmed existing ones, with the 30,000-student Muscogee County district becoming the latest to do so on Wednesday.

“This recommended added layer of protection is meant to promote the safe return to in-person instruction, help us do our part to further reduce transmission of the virus in our community, and to maintain continuity of operations,” the district said in a news release. The Columbus-based district said it was following guidance from a local advisory panel, the U.S. Centers for Disease Control and Prevention and the American Academy of Pediatrics.

So far, a small fraction of Georgia's 180-plus school districts are requiring masks. But the districts that have done so include six of the 11 largest districts in the state and represent more than 28% of all students statewide. A number of other districts have said they're considering tightening mask optional stances, and more announcements could be coming ahead of next week, when most Georgia districts start class.

Kemp had vowed in May that “We’re not going to have a mask mandate for our kids," but an executive order he issued that month fell short of actually banning masks in schools. Instead, the governor said school districts couldn't cite Georgia's public health state of emergency as a basis for requiring masks.

On Wednesday, Kemp again focused on encouraging people to get vaccinated voluntarily. Georgia ranks in the bottom 10 states for vaccination rates.

“My family, myself, and other state leaders have all rolled up their sleeves and gotten their shot,” Kemp tweeted. “I encourage all Georgians who have concerns or questions to talk to a medical provider and get vaccinated as quickly as possible.”

The Atlanta-based CDC on Tuesday changed earlier guidelines, recommending that even vaccinated people return to wearing masks indoors in areas with substantial or high transmission. CDC figures show 138 of 159 Georgia counties in those zones. The CDC also recommended that everyone in schools wear masks indoors, accelerating the shift in local school policies.