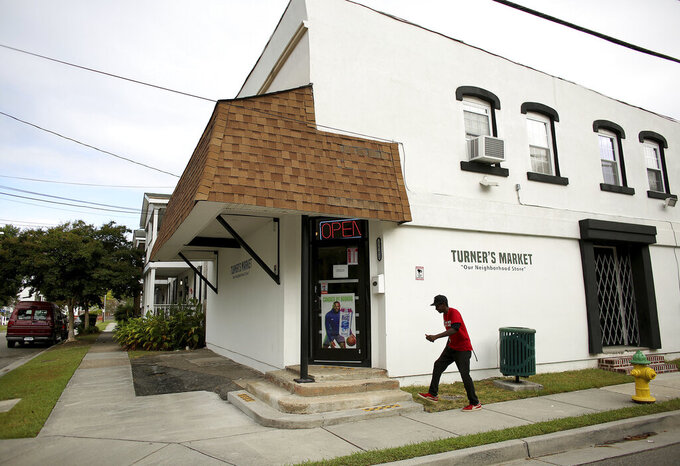 VIRGINIA BEACH, Va. (AP) — After over a year without a neighborhood grocery store, Norfolk residents in Olde Huntersville now have a place to buy fresh produce, meat, dairy and other food essentials.

Turner’s Market, a store that opened at 1500 Dungee St. in late August, is providing residents with a place to shop within walking distance. It’s also part of a larger effort by the city to address so-called “food deserts” and food insecurity.

“We knew we needed a grocery in this area,” Turner’s Market co-owner Jeffrey Turner said.

The 2,500-square-foot store includes frozen foods, snacks, soft drinks and other food items. The freezers and refrigerators are emblazoned with the market’s slogan: “Our neighborhood store.”

The market is also notable for what it doesn’t sell. Turner said he made a conscious choice to not stock cigarettes or alcohol. He said he wants the store to set a positive example for children in the neighborhood.

Turner and his wife and store co-owner, Sonya Turner, have lived in the neighborhood for years. Thomas Market had operated in the same building as Turner’s and closed several years ago, he said. Save A Lot, at the corner of Church Street and Brambleton Avenue roughly a mile away, closed suddenly a little over a year ago.

Those closures meant the closest supermarkets were more than a mile away. Harris Teeter is about a mile and a half away, Aldi is close to 2 miles and the Walmart Neighborhood Market is more than 2 miles out.

When almost one out of five Huntersville residents doesn’t own a vehicle, according to census data, that means some people must walk at least a half-hour before reaching a grocery store. The U.S. Department of Agriculture defines a food desert as a low-income census tract where a substantial number of residents do not have easy access to a supermarket.

City officials have also noticed the issue. Director of Economic Development Jared Chalk said the food desert problem has been getting worse the past several years.

The Economic Development Authority pledged $1,500 to help Turner’s Market open. The authority also funded a demand analysis that assessed the viability of a small grocery store for the neighborhood. The EDA also offered financial backing to the recently opened Berkley Supermarket, which filled a food desert created when the neighborhood Farm Fresh closed in 2018.

Still, the city can only do so much, Chalk noted, and said Turner funded the bulk of his project.

“He deserves a lot of credit for putting skin in the game,” Chalk said.

City officials hope to continue to invest in local food sources through a new federal grant program. Norfolk was one of 13 cities selected for the 2021 Local Foods, Local Places initiative. Sponsored by the Environmental Protection Agency and the USDA, the program will help Norfolk create a mobile farmers market, where residents will be able to buy food and participate in cooking demonstrations.

Turner, 56, also has outreach plans for his store. He wants to host a program for area youth in the building’s second floor, where he plans to teach them personal finance and other life skills. He would like to eventually create a shuttle service to bring older adults in to grocery shop. The store created five jobs, including employees from Huntersville.

“It’s a friendly environment,” Turner said. “We treat everybody who comes in here like family.”