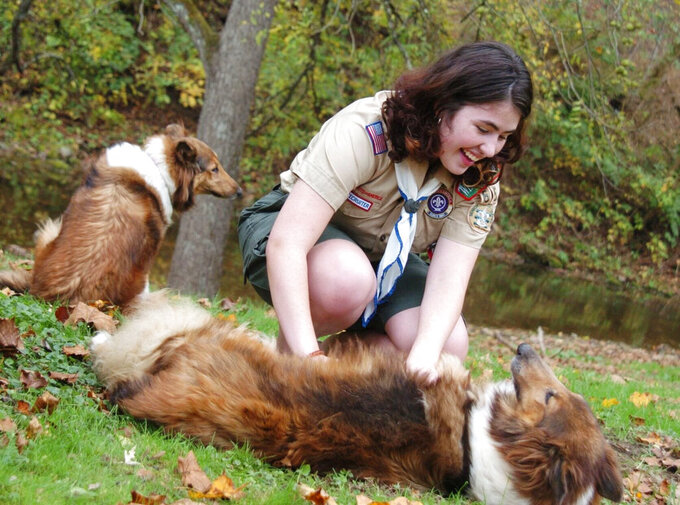 RIVESVILLE, W.Va. (AP) — Growing up, Tiara Long didn’t know her name was another word for a royal headdress, a most feminine accessory. She lived up to the nuances suggested by such a name by playing with other girls and doing all the cute things little girls do.

But she kept a watchful eye on her brothers. They were involved in Scouting, and that looked pretty fun to her. As her brothers worked on their projects for Scouting and later became Eagle Scouts, Tiara was there, helping with Scouting assignments, even if it was just cleaning up after meetings.

It didn’t take long for Tiara to realize she wanted to do the same kinds of things her brothers were doing — hiking, camping, building, and the many other Scout-related activities.

Problem was, she was a girl. And her brothers were Boy Scouts.

So when girls were officially admitted to Boy Scouts, now called Scouts of America, Tiara was all in. Not only did she want to be a Scout, she wanted to be an Eagle Scout.

Last month, Tiara, at 18, became the first female in Marion County to achieve the prestigious rank of Eagle Scout.

“I was always around it,” Tiara said. “I had grown up with it. I always wanted to do Boy Scouts because my older brothers all got their Eagle.

“Then when they let the girls in, I wanted to achieve a goal that not many people get to achieve. I saw the challenge, and I knew I wanted to do it,” Tiara said.

“She was 16 when she joined. She was given a little extra time, but she still had a deadline. You really don’t see kids getting that far without setting it as a goal,” Ayscue said.

There was a small window of opportunity for Tiara’s entry into Scouts, and later onto the track for Eagle Scout. There are age restrictions, as well as time limits for earning the different ranks prior to becoming an Eagle Scout.

Based on all of those restrictions, along with the fact that girls had just been granted entry into the Boy Scout program, Tiara had a total of two days to ensure her application would be accepted.

“I had to be (ranked) First Class to apply to be an Eagle Scout,” Tiara said. “Then, once you’re First Class, you only have two years to make it to Eagle.”

Over the next two years, Tiara completed the steps required to be an Eagle Scout.

“In the scout book, it outlines the specific requirements for each rank,” Tiara said. “I had to do three months of physical fitness and report it. I had to do this many camping trips, and cook, and plan this many meals, and talk to my scoutmaster about it.”

“It’s a big checklist, and it’s really hard,” Tiara said. “There are tons of different things you have to learn. I didn’t think it would be as hard as it was because I watched my brothers, but when I did it, I realized how hard it was,” Tiara said.

For one of many camping trips, Tiara was in charge of planning the menu.

“I had to figure out food to have on a hike for lunch, dinner and a snack. It had to be light — something everyone could carry,” Tiara said. “I made tacos in a bag. We have these little gas stoves, very tiny, you can take them apart. There’s a little propane tank you can hook to your bag, and we carried a pan on the back. I did little bags of Doritos, and then you put your taco meat in it, so all I had to do was warm up the taco meat. And they could put tomatoes on if they wanted, and then some sour cream. I got the little sour cream packets like the ones you get at Wendy’s.”

The menu was only one aspect of the hiking project.

She was in charge of designating roles for the other members of the troop the way a manager directs a business project.

“For every rank that scouts earn, they meet with a group of adults, called a board of review,” Ayscue said. “They are asked what their goals are and how they’re doing, so they get encouragement along the way.”

“And they also meet with the scoutmaster right before the board of review,” Ayscue said. “And Tiara made it very clear from her very first scoutmaster conference with me that she had a goal to be Eagle. That is not something you get from everyone.”

Tiara’s Eagle project was building a gaga pit, which is a large fenced-in area used to play gaga, a modified form of dodgeball.

Tiara is one of 10 children of Joe and Melissa Long of Rivesville. One child, Dreama, was born with severe disabilities and died when she was 4 ½ years old. Tiara was 6 at the time.

“She was my best friend,” Tiara said. “She had a lot of disabilities, and they didn’t think she would live that long.”

Today, Tiara is a student at Fairmont State University studying biology with her sights set on being an orthodontist.

“When I was in middle school, I had really bad teeth,” Tiara said. “Two of my teeth were stuck really high up in my gums. Really, really bad.

“After (my braces were removed), no one made fun of me any more, and now everyone tells me, ‘You have such a great smile.’ And it wasn’t like that before,” Tiara said.

“I want to be able to make people feel as good as I felt when I finally got my braces off.”