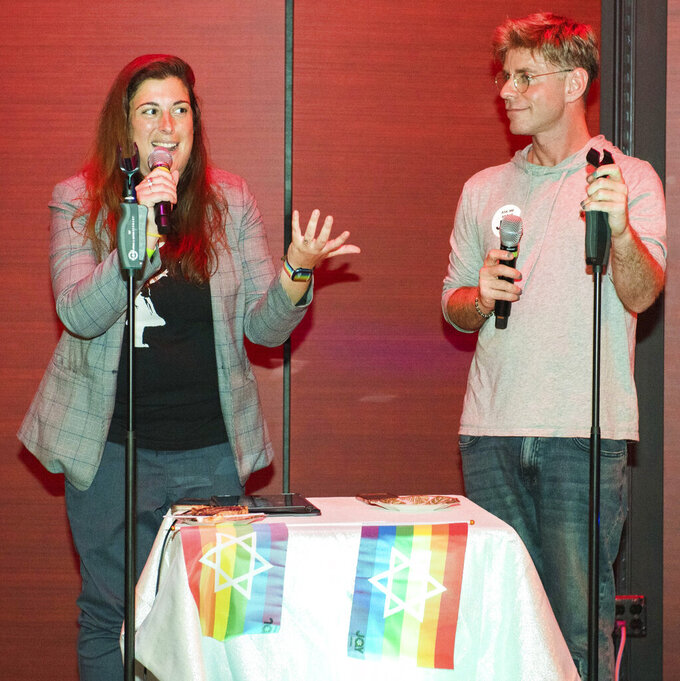 Justin Haim, ASSOCIATED PRESS
JQY Executive Director Rachael Fried, left, speaks, at the Jewish Queer Youth's annual community event for the festival of Sukkot on Oct. 13, 2022 in New York, accompanied by founder and Clinical Director Mordechai Levovitz. “A lot of people ask, why would somebody who is queer stay Orthodox? It’s like saying, there’s conflict in your family — why don’t you just leave?” Fried says. (Justin Haim via AP) 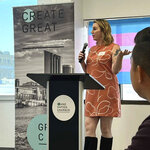 When queer students at Yeshiva University sued the school for discrimination in spring 2021, critics were quick to question why LGBTQ students would opt for an Orthodox Jewish university in the first place.

But for many LGBTQ Orthodox Jews, as with believers of other faiths, their religious identities are as nonnegotiable as their queer identities.

“A lot of people ask, why would somebody who is queer stay Orthodox? It’s like saying, there’s conflict in your family — why don’t you just leave?” Rachael Fried, a Yeshiva alumna and executive director of JQY (Jewish Queer Youth), a nonprofit that supports Orthodox Jewish queer youth, told Religion News Service.

In churches, synagogues and mosques as in families, religious teaching and texts are often cited in rejecting LGBTQ members, and many queer believers feel they have no choice but to leave. Many end up rejecting religion as a whole; others find meaning in accepting faith communities. But some LGBTQ religious people are reconciling parts of themselves that their faith’s doctrines frame as incompatible, continuing to serve and worship even where they are officially considered in violation of divine law or are barred from leadership.

For Madeline Marlett, it was the Jesuits who first showed her that being a Catholic, queer trans woman was possible.

Growing up in Texas, in a devoutly Catholic household of 10, Marlett told RNS, she would pray every night that she’d wake up the next morning in a different body. Years later, as a student at the College of the Holy Cross, a Jesuit school in Worcester, Massachusetts, the body dysmorphia hadn’t subsided.

“I was hoping that this trans thing would disappear, but through Holy Cross, the Jesuits showed me a different flavor of Catholicism. It was more about ‘God is love,’ less about ‘these are the rules,’” said Marlett, now 25 and living in Boston.

In a class called “Understanding Jesus,” Marlett said she first encountered the idea of a radical Christ who ministered to outcasts. “That became my barometer as I was unpacking what I believed. Is this rule loving? That’s what helped me rebuild my sense of religion to include myself and the people next to me.”

After graduating, she joined Dignity USA, a Catholic LGBTQ advocacy organization, changed her legal name and began presenting as Madeline.

Jodi O’Brien, a sociology professor at Seattle University, said many LGBTQ Christians have had the ‘aha’ moment Marlett did when she encountered stories of Jesus ministering to those on the margins.

“They rewrote themselves in the script of Christianity,” said O’Brien. “Instead of being the sinners, or the cast off, they were the ones who most embodied the love of Christ.”

For some, pursuing an accepting version of their faith means leaving institutional religion behind. For Randall Thacker, a Mormon and former president of Affirmation, a global organization that supports LGBTQ members of The Church of Jesus Christ of Latter-day Saints, separating God from the church was key.

“I would say I embrace my faith, but I don’t fully embrace the institution,” he told RNS. “That’s pretty hard in this kind of faith, where everything revolves around (the church).” Over the years, Thacker has learned to treasure doctrines he loves while ditching harmful teachings, a move that allows him to claim a faith that “feels like it’s in my DNA,” as he put it.

Jordan Jamil Ahmed, 31, takes a similar approach. “I think, often, organized religion, not just in Islam, is often a way to express political power over people, whereas for me, the idea of faith is more innate or intuitive.”

Ahmed is a Shiite Muslim who grew up in a multi-racial, multi-ethnic household in central Ohio. After years of wrestling with their queer and Muslim identities, Ahmed joined the Queer Muslims of Boston in 2020 and eventually connected with Union Square Halaqa, a group of marginalized Muslims who gather to study Islam.

“The halaqa is the first space where I’ve really come into my understanding of queerness and Muslimness together,” Ahmed said. The expansiveness of the divine, Ahmed believes, can’t be limited to the male-female binary. This broadened view of spirituality has also allowed them to experience God, they said, in everything from prayer to tarot cards to dancing at gay clubs.

But Ahmed’s spiritual fluidity, as much as their gender, has meant exile from some Muslim settings. “I’ve definitely built my community outside of traditional institutions. There aren’t really mosques where I feel comfortable.”

Tyler Lefevor, a counselor and psychologist, has found that queer believers can face exclusion in and outside of religious contexts. In a study published by the American Psychological Association this year, Lefevor and his co-author found that more than half of LGBTQ Mormons responding to a survey said they lacked belongingness in their faith community, the LGBTQ+ community or both.

The struggle to belong is what leads LGBTQ believers to create explicitly queer religious spaces like Affirmation, JQY or Dignity USA, Lefevor said. “A lot of these communities provide some of the theological tools queer religious folks need to stay within these conservative congregations. They are a group of people who get what it’s like to constantly explain yourself to people on both sides.”

The groups often go beyond theology. During the standoff at Yeshiva, JQY stepped in to fund the Pride Alliance, the student club at Yeshiva, after the university refused. It also hosts a weekly drop-in center in Times Square, where LGBTQ youth get free pizza, check in with social workers and have game nights.

Sergio Guzmán, who belongs to the San Fernando Valley chapter of Dignity USA, was emboldened by his participation to adopt what he calls a “Hell no, I’m not gonna go” stance toward the Catholic faith he loves.

After years of drifting in and out of church, Henry Abuto, a celibate gay Christian, found his way to the Side B community — a loose network of Christians who embrace queer identity but believe God designed sex for marriage between a man and a woman. Abuto, who attends a nondenominational church in Fort Worth, Texas, chose celibacy eight years ago as the best way for him to be true to himself and his faith. Like many on Side B, he’s since been called both a sinner for being gay and a self-hater for choosing celibacy.

In 2018, Abuto stumbled upon Revoice, an annual Side B conference. Suddenly, he was surrounded by people whose journeys mirrored his own. “Without that community, my walk would not be flourishing nearly as well as it is,” said Abuto, who is now a Revoice staffer.

Not all people reconcile their faith and queerness. A 2013 study from Pew Research Center found that nearly half (48%) of LGBTQ people are not religiously affiliated — more than double the share among the general public (20%). A third of religious LGBTQ people reported a conflict between their sexual orientation or gender identity and their beliefs.

Eric Rodriguez, an associate professor of psychology at City University of New York who has studied LGBTQ identity issues for decades, said faithful LGBTQ people can reject their religious identity, attempt to eradicate or suppress their queer identity, compartmentalize both identities or integrate them.

The issue of belonging is complicated by the wide range of attitudes toward LGBTQ inclusion, even when a faith is non-affirming on paper. In the Catholic catechism, homosexual acts are called “intrinsically disordered,” but in 2019 the Pew Research Center found that 61% of Catholics said they support same-sex marriage. In 2017, Pew reported that 52% of U.S. Muslims said homosexuality should be accepted by society.

“It’s the guys in the gowns and funny hats that have the issue,” as Guzmán put it.

Jeff Chu, author of “Does Jesus Really Love Me?: A Gay Christian’s Pilgrimage in Search of God in America,” said that affirming and non-affirming labels are overly simplistic. Chu married his husband in the Reformed Church in America and is an ordained elder there, but his ordination process, which for most people takes three years, has dragged on for six due to the denomination’s broader debate over LGBTQ inclusion.

“To just say ‘non-affirming denomination’ does a disservice to the reality on the ground, which is the truth that we are individuals, couples and congregations who are wrestling through a lot of complicated political and social terrain.”

Natalie Drew, a trans woman, never expected to land in a Christian Reformed Church congregation. The CRC, a close cousin to the RCA, codified its opposition to homosexual sex at the denominational level this summer. But Drew doesn’t choose churches based on whether they’re affirming.

“I don’t want to belong simply because they have an official policy. I want to feel like I belong because the people there treat me as if I’m truly their family. It could have happened in a lot of places. It just happened to happen at CRC church,” said Drew.

In light of the denomination’s opposition, Drew’s church, like many others, is reconsidering its future in the CRC. Drew said she’s not part of those conversations and doesn’t care to be. She loves the church’s commitment to ancient creeds and social justice work, and what ultimately matters is that she, her wife and her kids are welcome.

“For LGBTQIA people out there, who are struggling right now, there are churches out there,” she told RNS. “You don’t have to give up your faith to be who you are.”