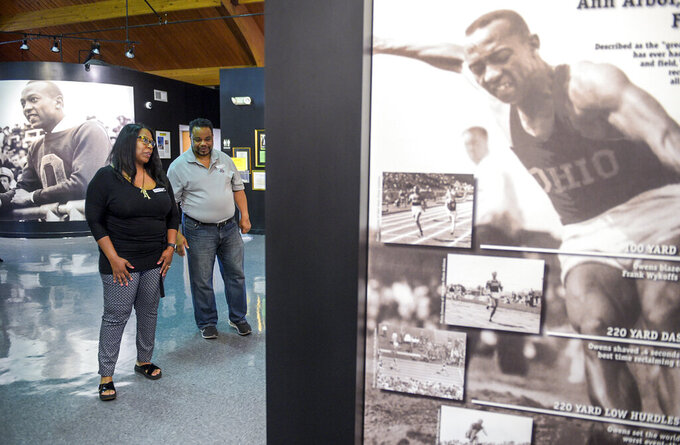 OAKVILLE, Ala. (AP) — Jesse Owens was more than just a track-and-field athlete and four-time Olympic gold medalist. He was a golfer, a Western movie fanatic, a friend, and a grandfather.

Marlene Dortch, one of Owens’ grandchildren, visited the Jesse Owens Museum in his Lawrence County birthplace this week and said she remembers he not only liked Western movies, but all things Old West.

Owens retired in Scottsdale, Arizona, and Dortch remembers visiting him on spring break each year. Owens’ favorite restaurant, Rawhide, was Western-themed, with gun fights, horses, and waiters dressed as cowboys. He loved the experience just as much as his grandchildren despite the interruptions from those requesting photos and autographs.

“He was always so friendly and gracious, and I remember how he was able to make us feel special and make the people who would come up to say ‘hello’ to him feel special as well,” said Dortch, who was 16 when Owens died in 1980.

She visited the museum in Oakville for the first time Tuesday, accompanied by her husband and son. Dortch liked the way it depicted all parts of his life, from his winning four gold medals in the 1936 Berlin Olympics to his life afterward.

“I love just seeing the family man and seeing him how I knew him,” Dortch said.

“When I first came in, it was a very emotional experience for me,” Dortch said. “It’s just so well done and so thorough. ... It goes through his life, really, and so that he’s honored in such a great way in the place where he was born is just an honor and it’s inspiring to me as well.”

She said she appreciates the quality and thorough coverage of her grandfather’s life. Owens is featured in other museums including at Ohio State and the Smithsonian, but Oakville is home to the only museum dedicated solely to Owens’ life.

Dortch and her family visited Oakville ahead of the 1996 Olympics in Atlanta, but the museum had not been built. However, they were able to see the bronze statue of Owens running through Olympic rings that stands outside of the museum.

The museum sits on a long country road in Oakville. Many have never visited, but Dortch and Nancy Pinion, museum director, said local residents should make the trip. The Olympics will be topical this week as the Summer Games begin in Tokyo.

“I think people would not only benefit from hearing his story but also a sense of pride,” Dortch said. “I would feel very proud to have a museum and a park like this right in my backyard.”

The museum covers every aspect of Owens’ life. From his days at East Technical High School in Cleveland, Ohio, to his philanthropy with the youth, the walls are covered in memorabilia and stories.

“I hope that his life and his legacy inspires generations to come, and there’s just so many great stories and so many ways that his life touches people,” Dortch said.

In Dortch’s short time at the museum, she encountered one such person who was inspired by Owens’ life. Dortch met an English teacher who said that learning about Jesse Owens made her a better teacher, specifically regarding the novel “The Book Thief.”

The historical fiction novel takes place during World War II in Nazi Germany. One young boy rubbed mud on his face before a race to impersonate Jesse Owens. The teacher said after visiting the museum she would be better able to understand the reference to Owens and explain its significance to her students.

“The more we learn about each other, the better we are as people,” Dortch said.

Dortch spoke to a group of state representatives, county commissioners, and other influential people of Lawrence County on Tuesday about what the museum means to her family.

For many of them, it was their first time in the museum as well.

“I just felt it would be good for them to meet her because it gives them a connection to the family,” Pinion said. “When they see the family is interested in it and wants to help us — it was an emotional meeting.”