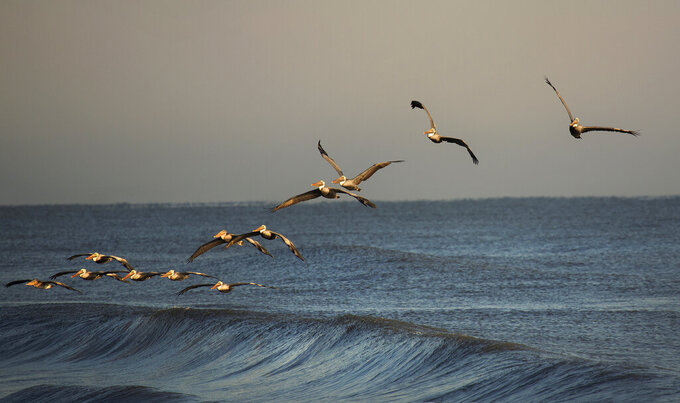 L. Todd Spencer, ASSOCIATED PRESS
In this 2019 photo, a squadron of brown pelicans gliding over the ocean waves off Sandbridge beach in Virginia Beach, Va. Squadrons of brown pelicans glide over the ocean at Virginia Beach’s North End on most summer mornings. Their pointy beaks and grayish-brown wings stand out against the blue horizon. They are latecomers to Virginia — breeding here was first documented in 1987 — and now they savor the state’s fish-rich coastal waterways.(L. Todd Spencer/The Virginian-Pilot via AP)

VIRGINIA BEACH, Va. (AP) — Squadrons of brown pelicans glide over the ocean at Virginia Beach’s North End on most summer mornings. Their pointy beaks and grayish-brown wings stand out against the blue horizon.

They are latecomers to Virginia — breeding here was first documented in 1987 — and now they savor the state’s fish-rich coastal waterways.

And their population is growing.

Two brown pelican colonies, or nesting sites, exist in remote areas of Virginia. South Point Marsh in Accomack County on the Chesapeake Bay has been home to thousands of pelicans since 1992. The other one is on Wreck Island National Area Preserve in Northampton County, on the seaside of the Eastern Shore.

“Even though they’re only in a couple of colonies, their numbers are increasing, and the colonies are getting bigger,” said Ruth Boettcher, a coastal nongame biologist for the Virginia Department of Wildlife Resources. She helped conduct a water bird survey in 2018 and documented the colonies.

Brown pelicans were an endangered species as the result of pesticide exposure in the 1970s, which thinned their egg shells. They’ve since fully recovered and are expanding, with thousands of breeding pairs returning to Virginia from points south each year.

They arrive throughout the summer to nest. Pelicans typically remain monogamous through a single season, laying up to three eggs. Usually, before cold weather sets in, they migrate south to Florida’s east coast.

But when warmer days stretch into fall and winter, some of the birds stay in the mid-Atlantic feasting on several pounds of menhaden and other fish each day. Cold weather can be dangerous for brown pelicans.

“When they get caught in a sudden drop in temperature that is prolonged, they can get into trouble,” Boettcher said.

Local wildlife rehabilitators have cared for and later released pelicans with frostbitten feet. Healthy ones typically weigh between 6 and 10 pounds and can live up to 40 years.

In the summer, brown pelicans hit their stride, flying in a ‘V’ formation or a straight line over the ocean and the Chesapeake Bay. They can spot schools offish from 70 feet above and will dive and plunge into the water, scooping up almost three gallons of sea water and fish into their elongated throat pouches.

Before taking off again, a pelican will squeeze the water out of its mouth and swallow its meal.

At night, they roost in trees, on jetties and in other nooks and crannies.

Brown pelicans are a social bunch. Rarely are they alone.

“They’re pretty gregarious,” she said. “I wouldn’t be surprised if they’re all hanging in a group on rocks.”