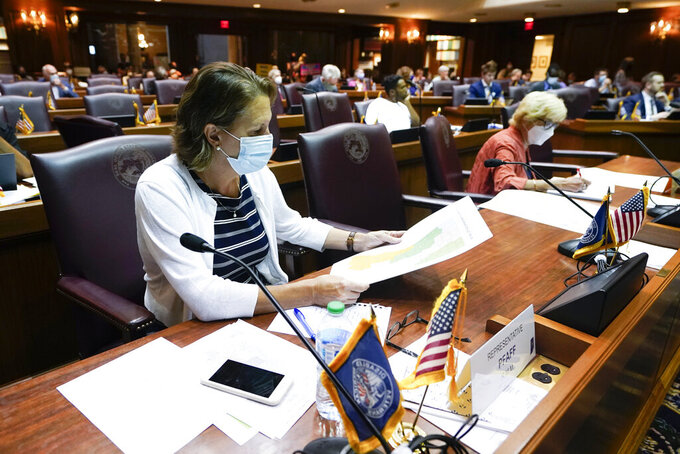 INDIANAPOLIS (AP) — Republicans will keep greater control of Indiana’s Legislature than merited by the number of votes they receive, according to a political analyst who on Thursday called the state’s proposed new election districts among most skewed in the country.

The analysis came as a legislative committee held a second day of public hearings on the Republican-drawn maps, with several people criticizing the fact that the new election district maps were released less than 48 hours earlier.

The redistricting plan review conducted for the voting-rights group Women4Change found Republicans would likely win 69 of the 100 Indiana House seats while typically receiving 56% of the vote. Republicans now hold a 71-29 majority in the Indiana House.

Christopher Warshaw, a political scientist at George Washington University who analyzes election data, said the proposed maps that will be used for the next 10 years boost Republicans by creating overwhelmingly Democratic districts to limit the impact of those voters.

“I think that while geography or other factors could explain part of these biases, these are so extreme that really nothing but politically intentional gerrymander could really explain the extent of the bias in these maps,” Warshaw said.

House Republican leaders didn’t immediately comment Thursday on Warshaw’s analysis but said Wednesday they focused their map drawing on factors such as not splitting up cities and counties and that the new maps reflect the state’s political leanings.

Republicans have used the commanding majorities they’ve in the Legislature since the 2012 elections to advance issues such as expanding state funding of vouchers for students attending private schools, toughening anti-abortion laws and approving the contentious state religious objections law in 2015.

“These maps will lead to more extremist and polarized candidates, because it will result in more uncontested races where a small group of political party loyalists will choose candidates based on their narrow agenda,” Shahid said.

Republicans released their proposals for the new congressional and Indiana House districts on Tuesday, with new map for the Republican-dominated state Senate not being made public until next week.

Democrats and voting-rights complain that leaves the public little time to study and comment on the new maps ahead of the final votes for General Assembly approval expected on Oct. 1 — making Indiana one of the first states to complete redistricting work.

The House elections committee, which is scheduled to vote Monday on endorsing the new maps, also heard bipartisan criticism of the redrawing of the state’s congressional districts aimed at protecting the 7-2 Republican hold on those seats.

The major changes shift the northern tier of Democratic-leaning Marion County from the 5th District that Republican Rep. Victora Spartz narrowly won last year to that of Indianapolis Democratic Rep. Andre Carson, while moving the GOP-leaning southside of Indianapolis from Carson’s district to the 6th District now held by Republican Rep. Greg Pence.

Misty Hollis of Richmond, the Republican chairwoman for the 6th District, said the district has been largely made up of eastern Indiana’s rural areas and small cities for decades and that the changes would reduce the influence of rural voters.

“In today’s polarizing environment, one would think that every attempt would be made to make sure that the voices of those who live in rural Indiana would be heard,” Hollis said.

The redrawn 5th District held by Spartz has the bulk of its population in affluent Hamilton County where she lives just north of Indianapolis, while extending north to include the cities of Anderson, Marion, Kokomo and Muncie that have faced factory closures and population declines for decades.

Democratic activist Andrew Ellison of Kokomo said it would be better for Spartz’s district to take in more of suburban Indianapolis and have a congressional district focused on the struggling counties north and east of Indianapolis. Ellison pointed out that no U.S. representatives have been from the area’s communities since 2000.

“They deserve a champion, they deserve somebody from one of these communities, who has lived in one of them, who knows the needs of the people that live in these places,” Ellison said.