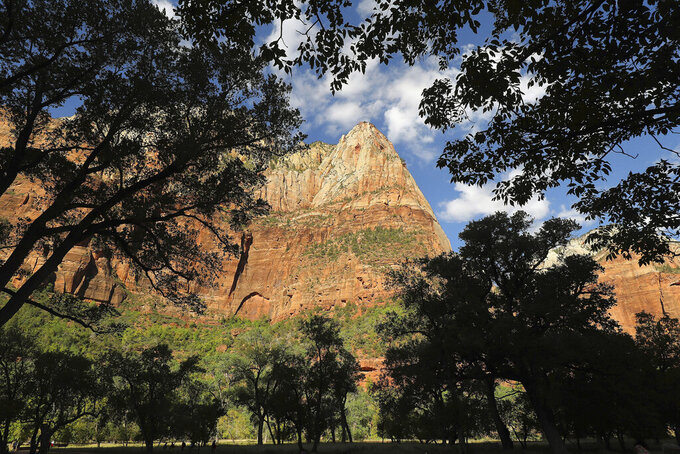 Jeffrey D. Allred, ASSOCIATED PRESS
FILE - Zion National Park is shown Sept. 24, 2018, in Utah. A new report from the advocacy organization Center for Western Priorities released Thursday, Oct. 28, 2021, said occupied reservations for campsites on public lands increased by 39% during peak season from 2014 to 2020. The Spectrum newspaper reports the West has seen the biggest increase out of all of the continental U.S. regions, with a 47% increase in camping reservations over the time span, with peak season occupancy jumping 20% from 2019 to 2020. (Jeffrey D. Allred/The Deseret News via AP, File)

A new report from the advocacy organization Center for Western Priorities released Thursday said occupied reservations for campsites on public lands increased by 39% during peak season from 2014 to 2020.

And the West has seen the biggest increase out of all of the continental United States regions, with a 47% increase in camping reservations over the time span, with peak season occupancy jumping 20% from 2019 to 2020, the Spectrum newspaper reported.

“Although more users of public lands is a good thing, the increase in visitation has led to serious overcrowding on some public lands, straining infrastructure such as campgrounds during the peak summer season,” the organization’s website said.

An interactive map by the Center for Western Priorities showed that campsites near or in Utah national parks were some of the most full out of all campsites in the state during summer 2019 and 2020.

Zion National Park saw extensive flash flooding on Tuesday after thunderstorms dropped more than an inch of rain in one hour. Park officials closed the main roadway through the park and issued warnings asking visitors to avoid the area.

The Watchman Campground in Zion National Park, the third most popular park in the country, saw 97% of its 185 sites occupied during that time span.

But people are wising up to the crowds, with summer weekday reservations bearing the brunt of the camping increase with much higher rates than summer weekends.

Also, more than 95% of reservable sites were reserved on peak season weekends during the same time period.

Plus, campgrounds outside of national parks in Utah have seen the camping wave hit them too.

“Our research also shows that reservable campsites in protected areas — even excluding national parks and their immediate surroundings — are more occupied during the peak season than other public lands, demonstrating the popularity of all protected lands, not just national parks,” the organization’s website said.

Although not mentioned in the report, illegal camping around Zion also saw a boost, with local residents complaining about illegal fire pits, litter, human waste and destruction of the open land.

“The pandemic has driven thousands and thousands to outdoor activity … but there are so many people visiting national parks that have never been outdoors before and they don’t know how to act.,” La Verkin City Councilmember Patty Wise said. “It’s something that needs to be regulated and a lot of the state agencies are trying to get a handle on it.”

Emily Friedman, the coordinator of the Zion Regional Collaborative, said the explosion in campers is largely due to the COVID-19 pandemic, with a study by KOA showing that “two-thirds of all camper households indicate the availability of vaccines will allow them to camp more and take different types of trips.”

“There are folks who felt uncomfortable staying in hotels or in downtowns and they wanted to practice social distancing,” Friedman said.

In June this year, the conservation organization Outdoor Industry Association found that 7.1 million more Americans participated in outdoor recreation in 2020 than in 2019, even during the COVID-19 pandemic.

Conservationists at the organization said the rise in visitation can fuel the speed of climate change, recommending managing agencies to take action fast.

“Recent trends in protected areas and national park usage further demonstrate the need to expand these popular designations in order to distribute campers across a larger area and drive visitation across different seasons,” the website said. “At the same time, increased funding and recreation management planning is needed to ensure the integrity of popular locations for camping.”