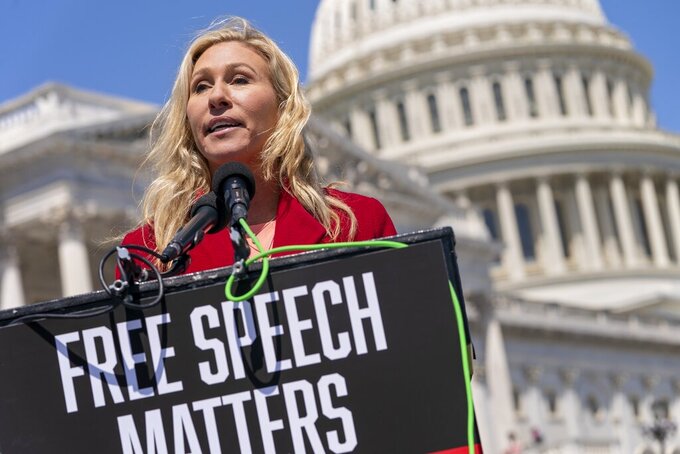 Jacquelyn Martin, ASSOCIATED PRESS
FILE - Rep. Marjorie Taylor Greene, R-Ga., speaks about Twitter, Thursday, April 28, 2022, on Capitol Hill in Washington. Greene, a far-right representative and conspiracy-peddling provocateur who has endorsed calls to assassinate prominent Democrats, is expected to coast to a primary victory on Tuesday, May 24 that will all but guarantee her another term in Congress.(AP Photo/Jacquelyn Martin, File)

WASHINGTON (AP) — One of the last remaining anti-abortion Democrats in Congress was facing his toughest primary challenge yet in Tuesday's runoff, while a staunch gun safety advocate ousted her House colleague in a fierce member-on-member congressional primary in suburban Atlanta.

For both Republicans and Democrats, Tuesday’s primary elections in Alabama, Arkansas, Georgia, Minnesota and Texas pitted members of the party’s activist base against more moderate candidates. The races offer a glimpse of what the next Congress could look like.

Moderate Texas Democrat Henry Cuellar, a nine-term incumbent, is a perennial target for progressives. But so far the anti-abortion congressman has prevailed in a series of close races in the largely Hispanic district that stretches from the Rio Grande to San Antonio.

Whether his winning streak will continue was not clear early Wednesday as Cuellar was locked in a close race against Jessica Cisneros, a 28-year-old immigration attorney and abortion rights supporter who once interned in Cuellar's Washington office.

The race was too early to call Wednesday morning.

The race is Cisneros' second attempt at ousting Cuellar, whom she lost to by 4 percentage points in 2020. She came within 1,000 votes of Cuellar in Texas' March primary, forcing Tuesday's runoff.

Heading into the night, it appeared she had a new edge after a recently leaked U.S. Supreme Court opinion draft showed the justices poised to overturn the historic 1973 Roe v. Wade decision that grants a constitutional right to abortion.

Adding to Cuellar's headwinds, the FBI earlier this year raided his home in the border city of Laredo. Though Cuellar’s attorney says he had been exonerated, the issue was enough of a liability that his allies sent out direct mail ads with a mock newspaper headline proclaiming him “cleared.”

The winner will face Cassy Garcia, who won the Republican runoff for the seat.

‘BRING IT ON, LIARS’

For the vast majority of Vernon Jones’ nearly three-decade-long Georgia political career, he was a Democrat. But this year, the scandal-plagued politician reinvented himself as a pro-Donald Trump Republican and jumped in the race for an open House seat that stretches from the Atlanta suburbs to Athens.

“Hell, they even call me the Black Donald Trump!” Jones tweeted after entering the race while challenging his rivals to “Bring it on, liars!”

Jones is one of the most prominent Black politicians to endorse Trump and spoke at the 2020 Republican convention. He even had Trump’s endorsement. Jones will go to a June 21 runoff against Mike Collins, a trucking company president whose father, Mac Collins, was a former Georgia congressman, on Tuesday. Neither crossed the 50% threshold needed to win outright.

Collins has already telegraphed that Jones’ considerable baggage will be an election issue.

As DeKalb’s executive, Jones faced investigations over his expensive security detail, and a woman accused Jones of raping her in late 2004. She dropped the charges but never recanted. Jones said they had a consensual sexual encounter. A grand jury later alleged that as CEO he was part of an endemic culture of “incompetence, patronage, fraud and cronyism.”

So McBath, a nationally renowned gun-safety advocate, went district shopping — and decided to challenge Bourdeaux, a college professor in her first term. And on Tuesday, McBath ousted her colleague-turned-rival, boosted by $4 millions in ad spending by the gun safety lobby, as well as a cryptocurrency billionaire.

McBath ran on a compelling personal story. She’s a Black woman whose son was killed by a white man during a dispute over stereo volume in 2012. Ever since her first election in 2018, McBath has made passing gun legislation through Congress her rallying cry.

It's a message that took on added poignancy Tuesday after an 18-year-old gunman entered a Texas elementary school, killing at least 19 children.

Marjorie Taylor Greene has been a lightning rod for controversy since her 2020 election to Congress. Barely a month into her term, she was stripped of her committee assignments after social media posts were unearthed showing she had endorsed calls to assassinate prominent Democrats.

But her provocations haven’t ebbed since then. And that’s apparently what voters in her conservative northwest Georgia district like about her.

On Tuesday, they overwhelmingly voted to send her back for a second term, dispatching a field of five GOP challengers, including a health care consultant who marketed herself as a “no-nonsense conservative” alternative.

Even before Greene was first elected, her antics enraged Democrats — and made her a rising Republican star.

In the short term, Democrats' decision to strip Greene of her committee assignments reduced her influence in a chamber where the hard work of legislating is what builds power and influence.

But if Republicans win back the House majority in November, as history suggests they may, she could still come out ahead. GOP leader Kevin McCarthy, who is in line to become House speaker, has said she won’t just get her committee assignments back; she’ll likely receive a promotion.

When Republican Rep. Jim Hagedorn died of kidney cancer in February, his widow, former Minnesota GOP chair Jennifer Carnahan, said her husband's wish was for her to succeed him and represent southern Minnesota in Congress.

The GOP primary race did not shape up that way, with Carnahan trailing in a distant third. The Associated Press has not yet called the race.

Even before announcing her bid, Carnahan's friendship with a GOP donor who was federally indicted for sex-trafficking minors sparked a firestorm. Then a recording surfaced last year in which she said, “Jim’s gonna be dead in two years. So be it." Last week, she was sued by her deceased husband's family as they attempted to recoup money they loaned him for cancer treatment, which they say she was supposed to pay back to them.

The drama, which local GOP officials have likened to a “dumpster fire," allowed two other candidates to surge ahead.