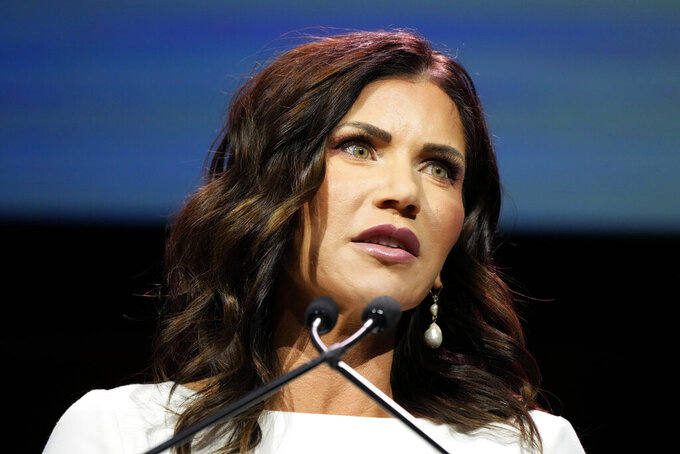 Charlie Neibergall, ASSOCIATED PRESS
FILE — South Dakota Gov. Kristi Noem speaks during the Family Leadership Summit in this July 16, 2021, file photo in Des Moines, Iowa. The four retired judges who make up South Dakota's Government Accountability Board usually meet just a handful of times a year, almost entirely unnoticed by the public, and have never advanced a complaint to a public hearing. They're now preparing for the high-profile task of weighing whether Gov. Kristi Noem twice abused the power of her office. (AP Photo/Charlie Neibergall, file)

SIOUX FALLS, S.D. (AP) — The four retired judges who make up South Dakota's Government Accountability Board usually meet just a handful of times a year, almost entirely unnoticed by the public, and have never advanced a complaint to a public hearing.

They're now preparing for the high-profile task of weighing whether Gov. Kristi Noem twice abused the power of her office.

The board is barely 4 years old, created by the Legislature after public pressure for ethics reforms in state government. It has met a total of 17 times, dismissing most complaints without a public hearing on the grounds that they fell outside its specific purpose to “review and investigate allegations of misconduct” by officials holding a statewide office or by executive branch employees.

WHAT ARE THE ALLEGATIONS AGAINST NOEM?

Attorney General Jason Ravnsborg — a Republican like Noem, but no ally of the governor's — referred two matters to the board. The first is a request from a Democratic lawmaker for an investigation into whether Noem's use of state airplanes broke the law; the other is concerns about whether the governor interfered in a state agency that was evaluating her daughter's application for a real estate appraiser license.

Noem, who is positioned for a White House bid in 2024, has denied wrongdoing and dismissed the cases as political attacks.

Concern from both Republican and Democratic state lawmakers has grown in the wake of an Associated Press report that the governor held a meeting with both her daughter and the director of a state agency that had moved to deny her daughter’s application for an appraiser certification.

WHAT CAN THE BOARD DO?

It has broad powers. It can dismiss an ethics complaint in a private conference without even naming who the complaint was against. If it decides to proceed with an inquiry, it can subpoena evidence and witnesses or even request the Division of Criminal Investigation to launch a probe. If it finds violations, the board can take a wide range of actions, from issuing private reprimands to requiring coursework or community service.

“This will be a real test of this new board, one we did not expect, but certainly appropriate,” said Karen Soli, the former Democratic lawmaker who spearheaded the effort to create the board.

WHY WAS THE BOARD CREATED?

Soli proposed the board in 2017 and got eager support from Republican lawmakers, who were under pressure from voters after repealing a voter-passed law that overhauled ethics laws. The push for ethics reform came after a series of state government scandals, Soli said, including one that culminated in 2015 with a couple dying in a murder-suicide after stealing hundreds of thousands of dollars from government programs.

The board is bipartisan. Noem appointed one of its members — former Supreme Court Chief Justice David Gilbertson. For many years, Gilbertson was a registered Democrat, but he told the AP last year that he had switched his party affiliation to independent.

“It’s comprised of folks who would have the ability to have good judgment, have the ability to say there’s nothing here, or we should have a closer look,” said Mark Mickelson, who as House Speaker in 2017 helped push the board proposal through the Republican-dominated Legislature.

If any board members recuse themselves, Noem would name a replacement. Governor's spokesman Jordan Overturf said, “we can't comment on hypotheticals,” when asked how the governor would handle that.

HOW WILL THE BOARD PROCEED?

That's not clear. The board has established procedures that call for an inquiry to start with an ethics complaint but has never received a referral from the attorney general's office.

Tim Bormann, a spokesman for the attorney general, said the office “does not have any oversight into the workings of the Government Accountability Board.”

He also declined to comment on whether the office had sent any documentation to the board.

Overturf said Noem's office had not received a notice of complaint from the board. Once the board receives a written complaint, it has 15 days to notify the person accused of wrongdoing, who in turn would have 15 days to respond.

Assistant Attorney General Katie Mallery, who is assigned to assist the board with procedural matters, said the board has not scheduled any meetings or determined how it will handle the referrals from the attorney general. It usually schedules meetings within 30 days of receiving a complaint.

Once it does meet, the four retired justices are sure to have an audience.

“Something like this could hold the governor accountable, but I certainly didn’t imagine it in my lifetime,” Soli said. “God bless those four — they have hard work ahead of them.”