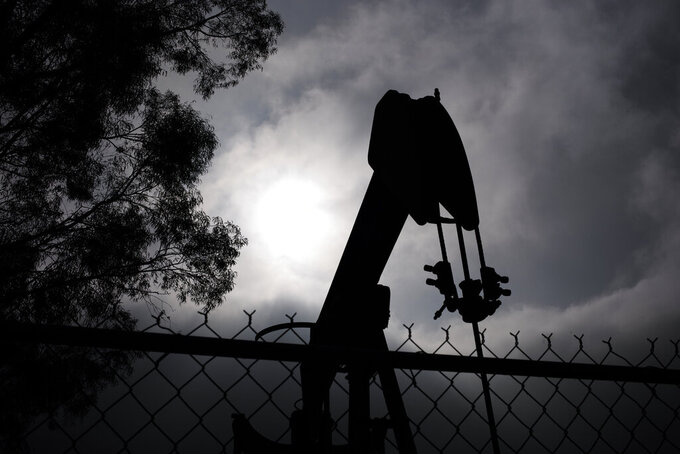 Jae C. Hong, ASSOCIATED PRESS
A pumpjack operates on Jan. 15, 2015, in Bakersfield, Calif. Residents of Bakersfield are concerned about potential explosions after a state agency found that six idle oil wells near homes were leaking methane in the past several days. (AP Photo/Jae C. Hong)

Some Bakersfield residents are concerned about potential explosions after a state agency found that six idle oil wells near homes were leaking methane in the past several days.

State and regional inspectors found concentrations of methane in the air around some of the wells at levels considered potentially explosive and environmental activists in the region are worried that other chemicals may also be leaking from the wells that could pose a threat to public health.

But Uduak-Joe Ntuk, head of the California Geologic Energy Management division of the California Department of Conservation, the agency that oversees wells and confirmed they were leaking, said in a statement that the leaks were “minor in nature and do not pose an immediate threat to public health or safety.”

Residents and environmentalists in the region first became concerned when they were alerted by Clark Williams-Derry, an energy analyst, that two wells were hissing within a few hundred feet of homes. He was visiting the area on May 10 with a French documentary crew that's working on a film about cleaning up oil and gas infrastructure around the globe.

“One of them was leaking, it was making an audible hiss,” Williams-Derry told the Associated Press. “And I was like ‘what the hell is going on?' I thought these things were supposed to be essentially sealed.”

On May 17, an inspector from the San Joaquin Valley Air Pollution Control District measured the concentrations of methane in the air surrounding the leaking wells, Jaime Holt, chief communications officer with the district, said in a statement to the Associated Press.

The agency wouldn't confirm the concentrations of methane they found. But a letter sent to the state’s oil and gas regulators by a coalition of environmental groups said the inspector found that methane levels in the air around one of the wells was 20,000 parts per million (ppm) and at least 50,000 ppm around the other well.

Those two wells have since been sealed, Ntuk said in a statement on Friday, but while inspectors were checking to make sure the seals on those wells stopped the leaks, they found four more idle wells leaking.

Methane is potentially explosive at air concentrations of 50,000 ppm, according to federal guidelines.

Riley Duren, an international methane expert and research scientist at the Arizona Institute for Resilient Environments and Societies and Research, Innovation and Impact, said that methane concentrations of 50,000 ppm can imply "an extreme and potentially hazardous event."

CalGEM said in their report on the four additional leaks that they were notifying the owner/operators of the wells, Sunray Petroleum, to repair the leaks and that they briefed the Bakersfield Fire Department. But environmental advocates in the region said the response by regional and state authorities did not go far enough.

“The response... (shows) complete disrespect for the safety of this community,” said Nayamin Martinez, director of the Central California Environmental Justice Network and a resident of the area, in a statement.

CalGEM said there was no reason to alert the public of the leaks, but advocates in the region disagree. In the days following discovery of the leaks, Cesar Aguirre, senior community organizer for the Central California Environmental Justice Network, canvassed the neighborhood surrounding the wells to notify residents.

Aguirre said he was warning residents about the potential of an explosion or fire in their community, but also about other possible pollution, like acute levels of ozone or smog, that might be forming around the leaking wells. Methane itself is usually non-toxic to humans, but a 2021 report from the United Nations points out ozone pollution is tied to methane emissions.

“Methane is a health precursor, which means that it never shows up alone,” Aguirre said. “So if there's methane, there's definitely other scary chemicals that are floating around with it.”

David J.X. González, lead author on a recent study on the distribution of abandoned wells in urban areas, echoed some of Aguirre's concerns and said the leaks are an “urgent public health issue.” He pointed out there are thousands of other idle wells spread throughout the state.

“Researchers have found that methane emissions from abandoned wells, which are disproportionately located in Black and Latinx neighborhoods, likely means other air toxics are being emitted too, which can cause birth defects, neurological damage, impaired hearing, and some cancers,” he said in a statement.

The neighborhoods near the leaking wells are between 20% and 70% Hispanic or Latino, according to the 2020 Census.

The coalition of groups pushing for the wells to be sealed hope the discovery of these leaks pushes the state to take action to ensure other idle wells throughout the state aren't leaking methane, a potent greenhouse gas. The leaking wells represent damage to the climate as well along with the health concerns.

“We... hope this will spur CalGEM to move swiftly to address the tens of thousands of other idle or near-idle wells across the state to prevent these types of accidences in the future,” they said at the end of the letter.

This story was first published on May 24, 2022. It was updated on May 25, 2022 to correct the spelling of the name of Jaime Holt of the San Joaquin Valley Air Pollution Control District.