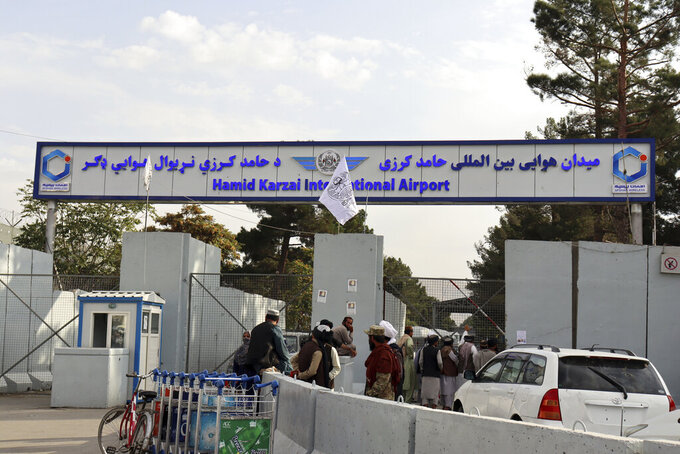 Khwaja Tawfiq Sediqi, ASSOCIATED PRESS
FILE - Taliban fighters stand guard in front of the Hamid Karzai International Airport after the U.S. withdrawal in Kabul, Afghanistan, Aug. 31, 2021. The nearly 12 months since the chaotic end to the U.S. war in Afghanistan haven't been easy for Joe Biden. In the summer of 2021, the American electorate largely approved of the new president's performance. (AP Photo/Khwaja Tawfiq Sediqi, File)

WASHINGTON (AP) — The 12 months since the chaotic end to the U.S. war in Afghanistan haven't been easy for Joe Biden.

The new president was flying high early in the summer of 2021, the American electorate largely approving of Biden's performance and giving him high marks for his handling of the economy and the coronavirus pandemic.

But come August, the messy U.S. troop withdrawal from Afghanistan seemed to mark the start of things going sideways for him.

It was a disquieting bookend to the 20-year American war: the U.S.-backed Afghan government collapsed, a grisly bombing killed 13 U.S. troops and 170 others, and thousands of desperate Afghans descended on Kabul’s airport in search of a way out before the final U.S. cargo planes departed over the Hindu Kush.

The disastrous drawdown was, at the time, the biggest crisis that the relatively new administration had faced. It left sharp questions about Biden and his team's competence and experience — the twin pillars central to his campaign for the White House.

As the one-year anniversary of the end of the Afghan war nears, the episode — a turning point in Biden's presidency — continues to resonate as he struggles to shake dismal polling numbers and lift American confidence in his administration ahead of November's critical midterm elections.

“It was a pivotal moment that he hasn't ever really recovered from,” said Christopher Borick, director of the Institute of Public Opinion at Muhlenberg College in Pennsylvania. “Things were going really well in terms of how voters viewed him in terms of bringing stability to the economy and how the government addressed the pandemic, issues that are higher priorities to the American electorate than the war in Afghanistan. But Afghanistan cracked that image of competency, and he hasn't ever really been able to repair it.”

The Afghanistan debacle was just the start of a series of crises for Biden.

As Biden was still dealing with fallout from the Afghan withdrawal last summer, COVID-19 cases began spiking again. Layered over that in coming were months were strains on the economy caused by inflation, labor shortages and the Russian invasion of Ukraine. The sum of it left Americans weary.

In the weeks before Afghanistan went sideways, Biden was riding high. His approval rating stood at 59% in a July 2021 poll by The Associated Press-NORC Center for Public Affairs Research. An AP-NORC poll conducted last month put his rating at 36%.

White House officials and Biden allies hope the president is now at another turning point — this one in his favor.

The administration has recently racked up high-profile wins on Capitol Hill, including passage of the $280 billion CHIPS and Science Act designed to boost the U.S. semiconductor industry. Congress also passed a program to treat veterans who may have been exposed to toxic substances from burning trash pits on U.S. military bases.

And over the weekend the White House sealed the deal on far-reaching legislation addressing health care and climate change that also raises taxes on high earners and large corporations, a package the administration says will also help mitigate the impact of high inflation.

The legislative victories followed Biden ordering the CIA drone strike in Kabul that killed al-Qaida leader Ayman al-Zawahri, who along with Osama bin Laden masterminded the 9/11 attacks. Biden says the operation validates the decision to withdraw from Afghanistan.

“I made the decision to end America’s longest war ... and that we’d be able to protect America and root out terrorism in Afghanistan or anywhere in the world,” Biden told a Democratic National Committee virtual rally last week. “And that’s exactly what we did.”

Biden had other big legislative wins after the Afghanistan debacle.

In November, he signed into law a $1 trillion infrastructure deal to fund rebuilding of roads, bridges and other big projects In April, the Senate confirmed Biden's history-making U.S. Supreme Court nominee, Ketanji Jackson Brown, who became the first Black woman to serve on the high court. And in June, Biden notched another win as Congress passed the most significant changes to gun laws in nearly 30 years.

But those legislative accomplishments weren't rewarded with a boost in his standing with voters.

Eric Schultz, a senior adviser to former President Barack Obama, argues that there's reason for the White House to hope that momentum is shifting with the recent legislative wins.

“The question is, ‘What did Democrats deliver when they swept into power in 2020?’" Schultz said. “And I think for Democrats running in November, we have an even better answer to that question than we did just a few weeks ago.”

Schultz added that the operation that killed al-Zawahri also offered strong evidence that Biden's instincts as commander in chief were correct.

“Nobody thought Afghanistan was going to be a panacea of rainbows and unicorns after we left,” Schultz said. “But the president made the right decision that based on U.S. national security interests we could execute our counterterrorism imperatives without having thousands of troops on the ground."

William Howell, a political scientist and director of the Center for Effective Government at the University of Chicago, said the biggest drag on Biden's standing with Americans has been runaway inflation and an unrelenting pandemic.

But the Afghanistan debacle became a defining moment in the Biden presidency, he said, marking when the American electorate began questioning Biden's ability to fulfill his campaign promise to usher in an era of greater empathy and collaboration with allies after four years of President Donald Trump’s “America first” approach.

“Afghanistan remains significant going forward as he tries to make that central 2020 argument of competency,” Howell said. “The images of Afghanistan are going to remain Exhibit A in the other side's rebuttal of the competency claim.”

The administration, for its part, has pushed back that lost in the criticism of the U.S. withdrawal effort is that in the war's final days, the United States pulled off the largest airlift in American history, evacuating some 130,000 U.S. citizens, citizens of allied countries, and Afghans who worked with the United States.

Biden continues to face criticism from immigrant refugee advocates that the administration has fallen short in resettling Afghans who assisted the U.S. war effort.

As of last month, more than 74,000 Afghan applicants remained in the pipeline for special immigrant visas that help military interpreters and others who worked on government-funded contracts move to the United States and pave the way for them to receive a green card. That total counts only the principal applicant and does not include spouses and children. More than 10,000 of that pool of applicants had received a critical chief of mission approval, according to State Department data.

Days after the unexpected fall of Kabul last year, national security adviser Jake Sullivan promised the White House would “conduct an extensive hot wash” and “look at every aspect" of the withdrawal from top to bottom.” But that effort has dragged on and is not expected to be completed before the Aug. 30 anniversary of Biden ending the war.

The White House has yet to detail how the president will mark the anniversary of a war that cost the lives of more than 2,400 U.S. troops and wounded nearly 21,000 more. Republicans are certain to resurrect criticism of the administration's drawdown.

Senate Minority Leader Mitch McConnell noted to reporters that while taking out al-Zawahri was a triumph for the intelligence community, the moment also confirmed that the Taliban — ousted from power by U.S. forces after 9/11 to deny al-Qaida a haven — are once again harboring al-Qaida.

“It is noteworthy where Zawahri was: In Kabul. So al-Qaida is back as a result of the Taliban being back in power,” McConnell said “That precipitous decision to withdraw a year ago produced the return of the conditions that were there before 9/11.”