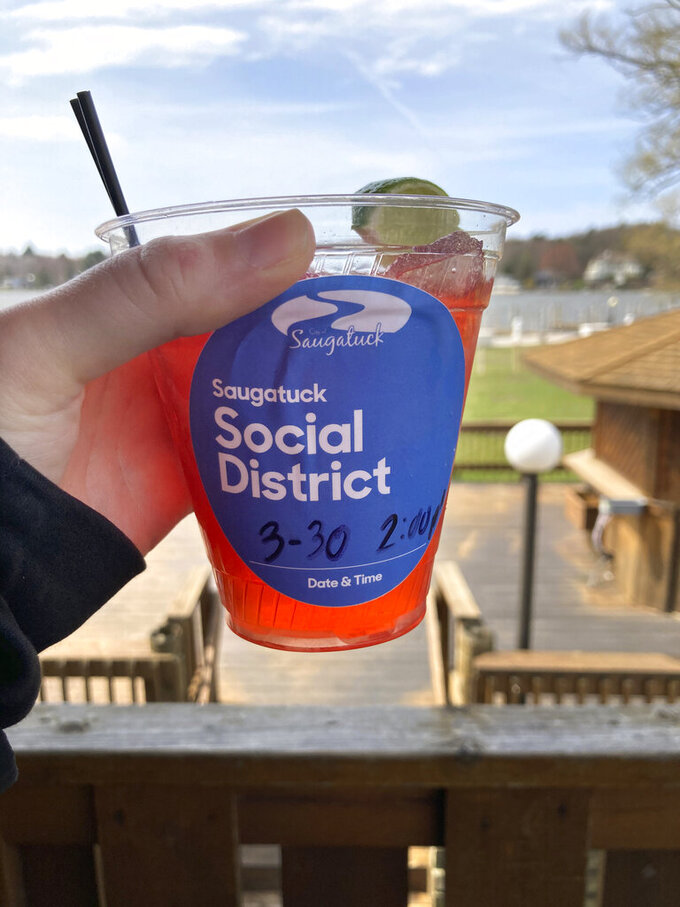 SAUGATUCK, Mich. (AP) — Saugatuck’s social district is gaining steam as the first establishments get permission from the state to serve to-go alcohol.

The social district is a creation of the state Legislature in response to the COVID-19 pandemic and allows for the consumption of alcohol outdoors in parks and on the streets in Saugatuck’s riverfront shopping district, provided the alcohol comes from approved establishments in cups marked with the social district logo, according to The Holland Sentinel.

At The Butler, the first restaurant to receive state approval to participate in the social district, co-owner Stephen Phelps said the to-go drinks are popular with customers on the weekends when there is a wait to be seated.

Customers sometimes order a drink and enjoy it in next-door Cook Park while they wait, he said, or take a walk downtown with a drink in hand. On a recent Saturday, Phelps estimates The Butler sold 50 to-go drinks.

The cups are marked with the Saugatuck social district logo, the logo of the business that served the drink and the date and time the drink was served.

The council has discussed the social district as a way to boost restaurant sales and activity downtown during the “shoulder season” — spring and fall — when tourism isn’t as strong. If the pilot is successful, the social district could be brought back in the fall.

“I think it’s a good thing for this town,” Phelps said. “It’s a great idea and I hope the city continues it and doesn’t cut it off.”

The other restaurant currently participating is New Holland Spirits, just across the road from The Butler.

A handful of additional Saugatuck restaurants have expressed interest or are currently applying for their licenses to participate in the social district from the Michigan Liquor Control Commission.

The social district is open 11 a.m. to 11 p.m., seven days a week, and encompasses the riverfront shopping and dining district.

“Our mission at the Saugatuck Douglas CVB is to promote our unique offerings to encourage travel and visitation to our area,” said Lisa Mize, executive director of the Saugatuck Douglas Area Convention & Visitors Bureau. “The new social district gives us an additional opportunity to drive and increase visitation to our retailers, bars and restaurants during a challenging shoulder season.

“We hope that the social district along with the pop-up patios that allow for more outdoor dining will continue to add to our visitor experience to explore downtown in a fun, safe, social setting.”

The visitor’s bureau is doing some promotion of the social district via publicity outreach and social media, but Mize said because the social district pilot has received some pushback from shop owners downtown and residents and is currently only a pilot program, the organization would wait until a decision is made on the future of the district to determine a full marketing strategy.

Residents have expressed concerns about how the social district will be enforced and one person at a recent city council meeting reported he had seen people bringing their own alcohol into the parks, which is not allowed under the social district rules.