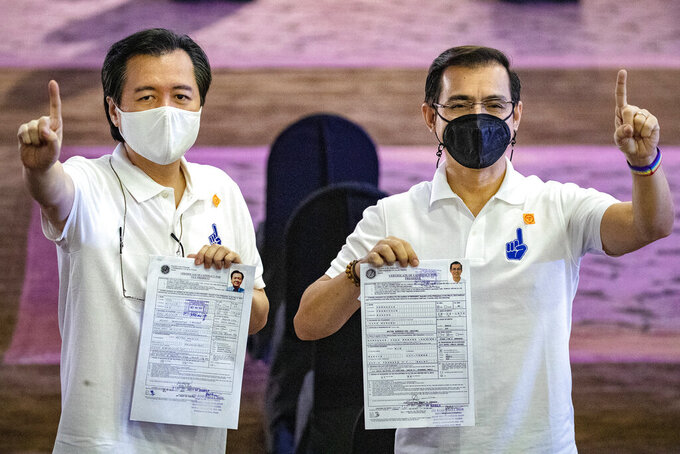 Ezra Acayan, ASSOCIATED PRESS
Manila City Mayor Isko Moreno, right, and running mate Dr. Willie Ong gesture after filing their certificate of candidacy for next year's presidential elections before the Commission on Elections at the Sofitel Harbor Garden Tent in Metropolitan Manila, Philippines on Monday Oct. 4, 2021. Politicians continue to register as candidates seeking to lead the Southeast Asian nation that has been hit hard by the pandemic and deep political conflicts. (Ezra Acayan/Pool Photo via AP)

MANILA, Philippines (AP) — The popular mayor of the Philippine capital registered his candidacy for the presidency in next year’s elections on Monday, promising to ease coronavirus outbreaks, fix the country’s battered economy and heal deep political divisions.

Mayor Isko Moreno is one of several aspirants in what is expected to be a crowded and politically hostile race to succeed Rodrigo Duterte. Senator and retired boxing star Manny Pacquiao filed his certificate of candidacy Friday, and Duterte's daughter is among others likely to seek the presidency in the May 9 elections.

The 46-year-old Moreno, who grew up in Manila’s slums and at one point scavenged for food as a child, is expected to bank on his rags-to-power life story, movie star looks and widely praised projects in Manila, including restoring order in its chaotic streets and public markets.

But he’s up against formidable politicians and celebrities, including whichever candidate Duterte and his ruling party will endorse.

“We are too divisive and indecisive (and) that caused the stomping of our economy on top of the pandemic,” Moreno told reporters. “My countrymen, give me a chance to heal our country for a bright future.”

Duterte’s successor stands to inherit enormous problems led by the pandemic, which caused the country’s worst economic recession, long-entrenched poverty and decades-long communist and Muslim insurgencies. The next leader will also take over in a politically charged atmosphere with Duterte facing a possible array of legal cases from his brutal anti-drugs crackdown that has left more than 6,000 mostly petty drug suspects dead. The International Criminal Court is investigating the killings.

The ailing Duterte, 76, announced Saturday he was retiring from politics and withdrew from an earlier plan to run as vice president under the ruling PDP-Laban party. That decision opened an option for his daughter, southern Davao city Mayor Sara Duterte, to run for the presidency.

Sara Duterte has said she and her father have agreed that only one Duterte will run for a national office next year. She has registered to run for reelection as mayor but speculation remains rife that she will decide to seek the top post.

Amnesty International Secretary General Agnès Callamard said Duterte’s exit from politics should not mean that his role and responsibilities for the widespread drug killings would end too.

“His political retirement should, in fact, strengthen the possibilities and avenues for accountability,” Callamard, a former U.N. special rapporteur on extrajudicial, summary or arbitrary executions, told The Associated Press. “What I do hope is that whoever follows on his bloody steps will fully reverse the bloody policies he conducted against the poor, the sick, the addicts.”

Justice Secretary Menardo Guevarra said Monday a recent government review of police records found more than 150 officers could be criminally liable for abuses in dozens of anti-drug raids. He said there will be further investigation.

“The campaign against illegal drugs could be successfully waged within the bounds of the law and without the use of excessive force," Guevarra told the AP. “Any law enforcement agent who oversteps these bounds or abuses his authority shall be held accountable,."

Only a handful of officers have been convicted for wrongful killings of drug suspects since Duterte launched the bloody campaign in 2016. Human rights groups have called for an independent investigation and welcomed the International Criminal Court probe, but Duterte’s spokesman has said the Philippine leader “will die first before he faces foreign judges.”