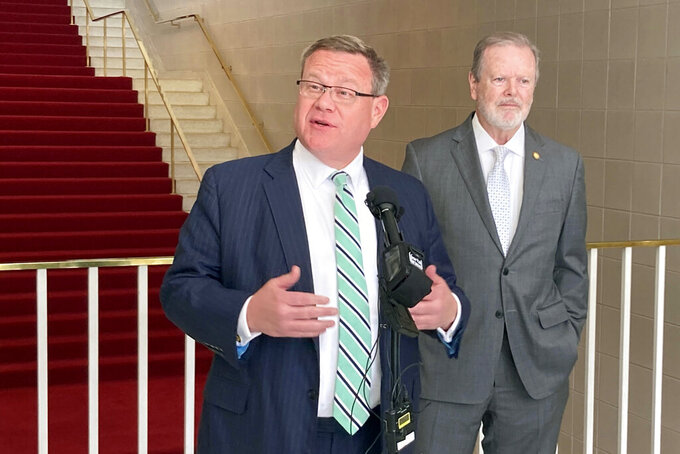 RALEIGH, N.C. (AP) — North Carolina Republican legislative leaders said Wednesday that they're shuttling the idea of Medicaid expansion to 2023, rather than attempting to negotiate a bill that could be voted on before the General Assembly's current two-year edition ends in December.

By wide bipartisan margins, the House and Senate approved competing bills months ago that were designed to cover hundreds of thousands of additional low-income adults through the government's health insurance program that mostly serves the poor. Republicans within the two chambers have disagreed over whether additional health care access changes should be attached to expansion.

The General Assembly’s chief work session ended in early summer, but there was optimism that an agreement could be reached by the end of the year — in particular for a short work session scheduled to start Dec. 13. Democratic Gov. Roy Cooper, a longtime expansion supporter, urged them to act.

But in speaking with reporters at a post-election news conference, Senate leader Phil Berger said there are now no plans to take up anything substantive during next month's work period, or in another three-day meeting that starts next week.

As for expansion, Moore said: “I think we’ll deal with that next year.” The two-year session concludes Dec. 31. Soon after, the 170 people elected to the General Assembly will begin serving through the end of 2024.

“I don’t disagree that waiting until next year is the right thing to do,” Berger added.

North Carolina is one of about a dozen states that haven't accepted the federal government’s Medicaid offer originating from the 2010 health care law, in which Washington pays 90% of the medical costs. On Tuesday, voters in South Dakota passed a constitutional amendment to accept expansion, which means roughly 40,000 people would become eligible for Medicaid.

Cooper spokesperson Mary Scott Winstead cited the South Dakota vote while criticizing the delay, which she said makes North Carolina “one of the last states still searching for our compassion and common sense.” The Cooper administration has said North Carolina is missing out on over $500 million for each month that it fails to implement expansion.

“Waiting until next year is astonishingly wasteful, irresponsible and cruel, costing us lives and billions of dollars,” Winstead said in an email.

Berger said months ago that the state’s hospitals weren’t willing to negotiate on reforms to “certificate of need” laws — something Senate Republicans considered a necessary element of any agreement. These laws require regulatory approval before certain medical buildings can be constructed or services offered in a region.

The North Carolina Healthcare Association, representing hospitals and hospital systems, disclosed in September what its leaders considered a compromise in those areas, but Berger later called the offer “not a serious proposal.” Expansion talks, at least public ones, have quieted since then.

“I think we’re close on some things. Other things we’re not,” Moore said about negotiations, adding that “a more comprehensive discussion” on the issues will probably occur next year.

While Republicans made gains in both the House and Senate in Tuesday election, they failed to win enough seats to successfully override a Cooper veto on their own. While the Senate reached a veto-proof margin for the GOP, Republicans appeared to be one seat short of a similar threshold in the House.