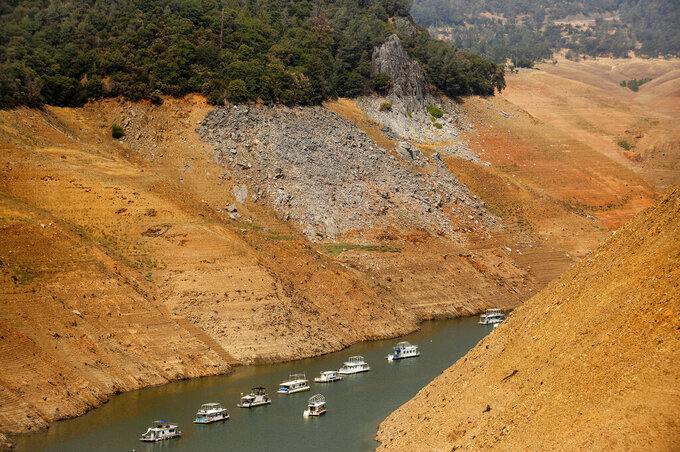 Noah Berger, ASSOCIATED PRESS
FILE - In this Aug. 14, 2021, file photo, houseboats rest in a channel at Lake Oroville State Recreation Area in Butte County, Calif. California is set to get its first significant soaking of the season this week, with forecasters predicting up to 7 inches of rain is possible in some parched parts of the state. The rain will help stop smoldering wildfires and could lessen water restrictions on farmers. But it won't be enough to make up for all of the water California lost this summer following some of the driest months on record. (AP Photo/Noah Berger, File)

SACRAMENTO, Calif. (AP) — Showers drifted across the drought-stricken and fire-scarred landscape of Northern California on Wednesday, trailed by a series of progressively stronger storms that are expected to bring significant rain and snow into next week, forecasters said.

The National Weather Service said there was high confidence in the forecast for the arrival Sunday of an atmospheric river — a long and wide plume of moisture pulled in from the Pacific Ocean. That storm is also expected to affect Southern California.

Water experts say the big rainmaker won’t be enough to end the drought but it could be enough to lessen some water restrictions imposed on farmers earlier this year.

The rain and snow also have helped quiet some of the wildfires still burning since summer but in some cases the precipitation also made it difficult to use heavy equipment, according to daily situation reports.

At the KNP Complex fire in Sequoia and Kings Canyon national parks, the big storm forecast led to an increased emphasis on repairs to prevent damage caused by runoff.

“Without vegetation to naturally slow water movement produced by the storm, flash flooding and heavy debris flow could be possible, bringing logs, limbs, rocks and sediment down slopes, across roads and into streams and culverts,” the KNP update said Wednesday.