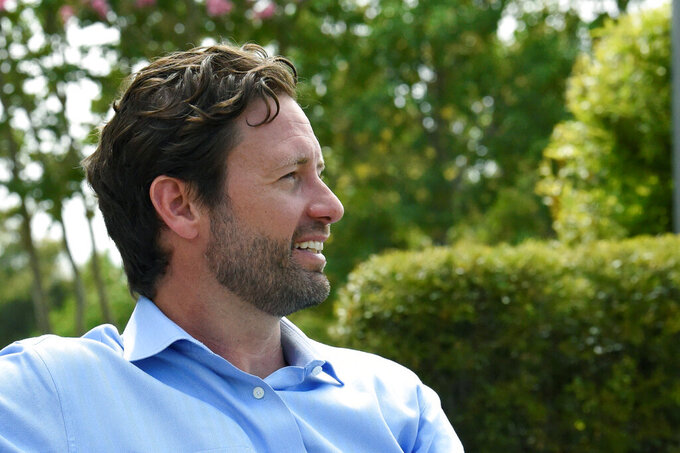 Meg Kinnard, ASSOCIATED PRESS
Former U.S. Rep. Joe Cunningham talks during an interview with The Associated Press about his campaign for South Carolina governor on Saturday, July 10, 2021, in Mount Pleasant, S.C. Cunningham says he wants to legalize marijuana in South Carolina, something he says would provide healthcare options, create jobs and generate millions in revenue for the state. (AP Photo/Meg Kinnard)

Democratic gubernatorial candidate Joe Cunningham is rolling out a plan to boost South Carolina's COVID-19 vaccinations, a number the former congressman said is low due to a lack of leadership under Republican Gov. Henry McMaster.

”We are on the verge of another major wave of COVID cases in South Carolina, and Governor McMaster seems content with doing very little to stop it,” Cunningham said in a news release Monday. “The solution is getting more people vaccinated, and we should be exploring every option at our disposal to accomplish that goal."

Vaccination rates in South Carolina have been among the lowest in the country, with just over 44% of eligible residents having been fully dosed, according to data updated Saturday by state health officials.

New COVID-19 cases have been on the rise, with the average number doubling in the past two weeks to about 410 cases a day amid no signs of slowing down, according to state health officials.

“Our state remains near dead last in the country in vaccines, and that is in large part because of the lack of leadership by our state leaders — namely Governor McMaster,” Cunningham said.

Cunningham also proposed a “primetime Oval Office-style address” to the state to press the need to get vaccinated, as well as the creation of a vaccine incentive program to raffle off prizes like a luxury car lease or vacation packages to vaccinated South Carolinians.

McMaster, who posted photos of himself getting vaccinated earlier this year, said last week that, while getting the COVID-19 vaccine was the right decision for him, others who are reluctant need to talk to friends, pastors and doctors and should make their own choices.

“It’s a personal decision. We made our decision. I think it was the right decision,” McMaster said Thursday after a meeting of a committee reviewing how to spend federal COVID-19 relief money.

McMaster has not discouraged anyone from getting the vaccine, although the incumbent governor did come out firmly against having teams go door-to-door offering doses.

McMaster spokesman Brian Symmes said the governor “knows how smart South Carolinians are and refuses to underestimate their ability to make decisions for themselves.”

“He doesn’t think government needs to be in the business of coercing its citizens into making decisions with politically-motivated gimmicks,” he added.

The proposal is among several Cunningham has introduced since launching his campaign this spring.

Earlier this month, he put forth his push for medicinal and recreational legalization of marijuana, changes he told The Associated Press would offer health care options and spin off millions in tax revenue for state coffers. In June, Cunningham unveiled a proposal to expand background checks on all sales and fund statewide violence prevention programs.

Cunningham has been taking on McMaster directly since his campaign launch in the spring, although he'll still need to face off with several other Democrats in next June's primary.

They include party activist Gary Votour, who last week rolled out a health care platform that he said would include Medicaid expansion on his first day in office. State Sen. Mia McLeod officially launched her bid last month but has not issued news releases detailing any specific policy plans.