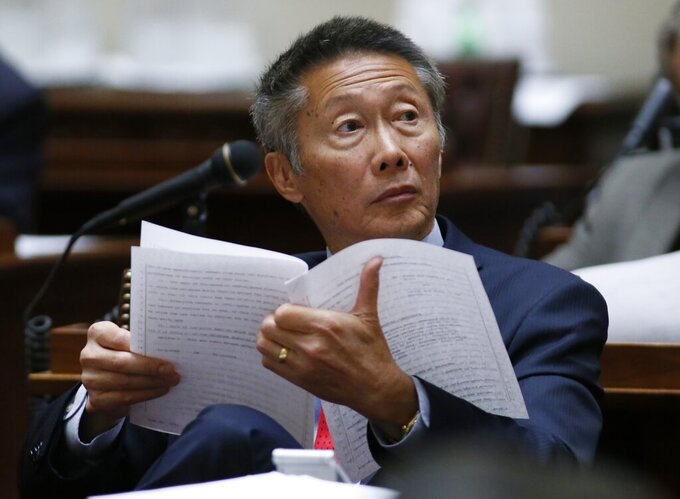 Sue Ogrocki, ASSOCIATED PRESS
FILE - In this May 17, 2016, file photo, Oklahoma state Sen. Ervin Yen, R-Oklahoma City, works on the Senate floor in Oklahoma City. Former state Sen. Ervin Yen, the first Republican candidate to challenge Oklahoma Gov. Kevin Stitt said he’s leaving the party and will run against Stitt as an independent. Ervin Yen, an Oklahoma City physician, said in a statement Tuesday, Oct. 19, 2021, that he disagrees with the state party’s opposition to mask and vaccine mandates, and the insistence of some party officials that the 2020 election was stolen from former President Donald Trump. (AP Photo/Sue Ogrocki, File)

OKLAHOMA CITY (AP) — The first GOP candidate to challenge Oklahoma Gov. Kevin Stitt said Tuesday he’s leaving the party and will run against Stitt as an independent, making him the second elected Oklahoma Republican in recent weeks to leave the party in part because of the governor's handling of the coronavirus pandemic.

Former state Sen. Ervin Yen, an Oklahoma City physician, said in a statement he disagrees with the state party’s opposition to mask and vaccine mandates, and the insistence of some party officials that the 2020 election was stolen from former President Donald Trump.

“I vehemently disagree with these views and that is why I have withdrawn my Republican voter registration," Yen said. “I have not changed, the party has.”

Earlier this month, Republican State Superintendent of Public Instruction Joy Hofmeister said she was leaving the party and planned to run against Stitt as a Democrat, accusing the governor of “hijacking" the Republican Party in Oklahoma.

Hofmeister broke with four of Stitt’s appointees to the state school board last year over whether to require schools to follow coronavirus protocols, including wearing masks. Stitt’s appointees voted to make complying with the protocols optional. She also opposed a bill Stitt signed last year prohibiting school districts from requiring students to wear masks.

Yen, the first Asian American elected to the Oklahoma Legislature, has been particularly critical of Stitt's response to the coronavirus pandemic, especially the governor's opposition to mask mandates.

“I absolutely believe in temporary mask mandates, when needed, to fight this current Covid pandemic," Yen said. “If the state had instituted a state-wide mask mandate in June of 2020, we could have avoided 70% of the Covid deaths that we have suffered since then."

More than 10,000 Oklahomans have died from COVID-19 since the start of the pandemic last year.

A spokeswoman for Stitt's campaign, Donelle Harder, said Stitt remains popular in Oklahoma in part because he's viewed as a political outsider “fighting for individual liberties and fiscal responsibility.”

“Oklahomans support Stitt because he is delivering results and staying true to his campaign commitments,” Harder said.