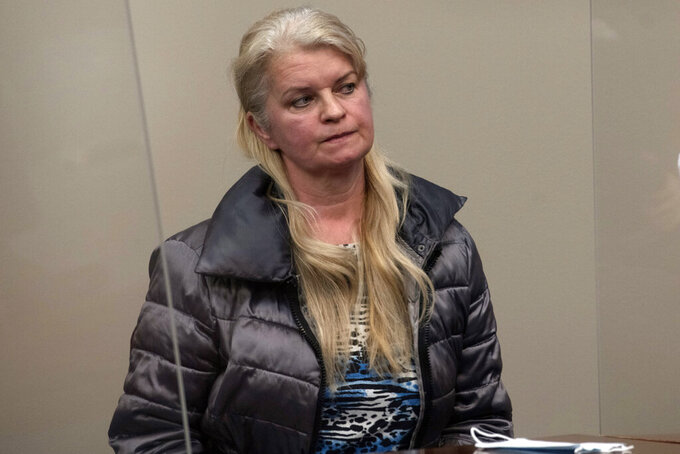 Nicole Hester, ASSOCIATED PRESS
FILE - In this March 19, 2021 file photo, Marlena Pavlos-Hackney sits in the courtroom during her arraignment at the 30th Judicial Circuit Court in Lansing, Mich. The Michigan restaurant owner who flouted COVID-19 restrictions and spent four nights in jail in March said she plans to reopen in a few weeks. The food license yanked from Marlena's Bistro and Pizzeria in Holland has been restored, Marlena Pavlos-Hackney said. (Nicole Hester/Ann Arbor News via AP File)

HOLLAND, Mich. (AP) — The doors at a western Michigan restaurant were open before sunrise as the owner welcomed diners for the first time since she spent four nights in jail for ignoring orders related to COVID-19.

Marlena’s Bistro and Pizzeria in Holland had been closed since March. But Marlena Pavlos-Hackney has recovered her food license.

“She’s a hero,” said Kris Simmons, one of the first customers to place a breakfast order Tuesday.

Pavlos-Hackney last winter allowed indoor dining, despite state and local prohibitions, and ignored other rules aimed at controlling the spread of COVID-19. She said her customers’ health was up to them.

Michael Farage ordered steak and eggs Tuesday and offered a side dish of praise.

Pavlos-Hackney still believes her rights were violated. She is appealing a $15,000 fine that had to be paid before she could leave jail.

“It feels so good to see all my people, their smiling faces. This means a lot to me,” she said.

Ingham County Judge Rosemarie Aquilina, who put Pavlos-Hackney in jail, said she had put the community at risk. Attorney General Dana Nessel said she had defied court orders and the local health department “at every turn.”