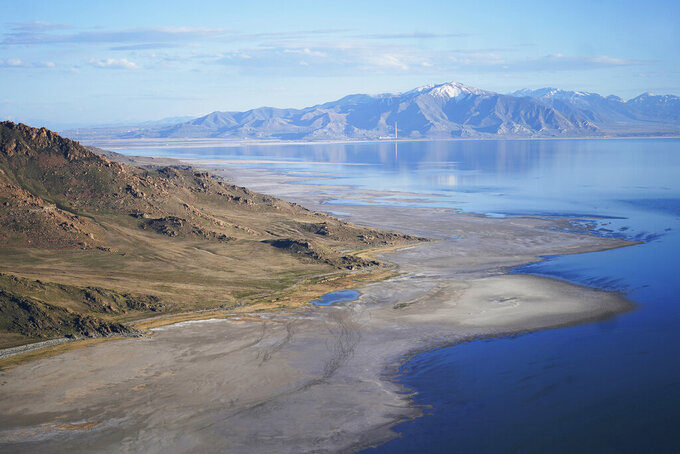 Rick Bowmer, ASSOCIATED PRESS
FILE - In this on May 4, 2021, file photo, the Great Salt Lake recedes from Anthelope Island, near Salt Lake City. In an effort to help save the shrinking Great Salt Lake, environmentalists are working to secure water rights for it. They're hoping a donation of 21,000-acre feet from Rio Tinto Kennecott will ensure more water flows into the shrinking lake. (AP Photo/Rick Bowmer, File)

FARMINGTON, Utah (AP) — In an effort to help save the shrinking Great Salt Lake, environmentalists are attempting a novel idea: securing water rights for a terminal system.

The Great Salt Lake is now nearly a foot below its last recorded level in 1963, alarming environmentalists and Utah’s policymakers.

“Right now, Great Salt Lake is facing its lowest recorded levels ever since 1847. We’re anticipating even lower levels. We hope we don’t see that. With climate change and the serious drought and continued desires to divert more water, this is going to be a challenge,” said Marcelle Shoop, the director of the Audubon Society’s saline lakes program.

Legally speaking, the lake is considered to have “no beneficial use” because it’s a terminal system — water that enters the Great Salt Lake ends there. That has historically contributed to some of the pressure to divert water away from it for agriculture, development and other needs.

In an effort to help the Great Salt Lake recover, a coalition of environmental groups have partnered with Rio Tinto Kennecott and the Central Utah Water Conservancy District in a first — securing water rights for the lake itself.

“Kennecott has a water right that’s currently in excess of our demands for our mining and industrial operations,” Ted Balling, Rio Tinto Kennecott’s senior advisor for water resources, said in an interview with FOX 13. “We’re able to donate this water right, let it go down the Jordan River out to Farmington Bay to benefit the wildlife and habitat out there.”

The donation, about 21,000-acre feet of water, took years to secure.

“It took two years to work through those issues,” Neville said. “It was really hard, really asking hard questions, using the existing laws and making sure we cross all the T’s, dotted all the I’s.”

Utah’s Division of Wildlife Resources, which will help administer the water rights, said it is believed to be the first time this has happened.

“Water rights are a complicated issue, so we’re grateful for the partnerships that did donate to sort of benefit and restore the Great Salt Lake water levels,” said Faith Heaton Jolley, a spokeswoman for DWR.

Rio Tinto Kennecott also paid for the legal paperwork. Because it is technically a donation, water rights are not permanently transferred and can be taken back if needed. Instead, they will donate the 21,000-acre feet every year for the next 10 years. Balling said conservation and water efficiency measures at their copper mine allow for it to happen.

“It’s a great step forward and we hope it brings some attention,” said Balling.

“People don’t realize it’s part of our entire existence when we live around it,” said Ann Neville, the regional director for The Nature Conservancy.

Given the sheer size of the Great Salt Lake, 21,000-acre feet is not a lot. But Neville said what this does is open the door for future water rights transactions to help protect the lake.

“There’s a lot of options that we’re looking at that could be an opportunity if they’re not using, could we put it to beneficial use for Great Salt Lake?” she told FOX 13.

The Utah State Legislature has been exploring a number of policy changes including changing the legal definition of Great Salt Lake water and ensuring more water does wind up there.

“There’s a growing change in the way policymakers are seeing this and a recognition that Great Salt Lake is critical,” Shoop said.