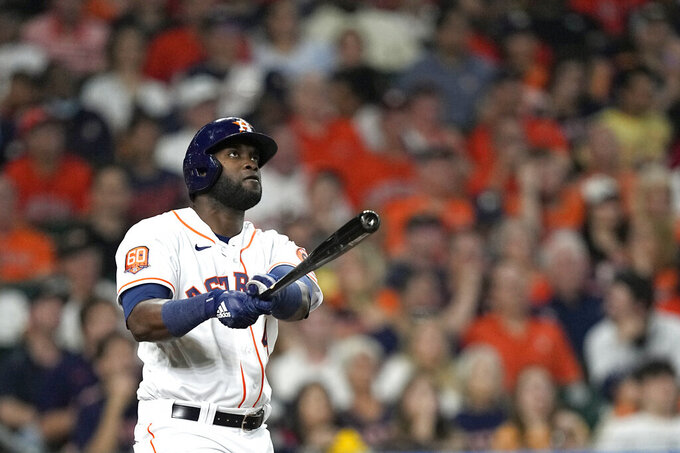 HOUSTON (AP) — Houston manager Dusty Baker considered giving Yordan Alvarez another day off after he missed five games because of COVID-19 health and safety protocols because he wasn't sure if Alvarez was ready to go.

It quickly became apparent Monday night that the big slugger didn't need any more time off.

Alvarez homered twice with four RBIs in his return to the lineup to lead the Astros to an 8-3 win over the Los Angeles Angels in their home opener.

“It was unbelievable," Baker said. “He came back better than when he left. He was struggling a little bit when he left. He told me he was ready, so when says he’s ready I guess I’ve got to take his word, especially after tonight’s performance."

But the Astros lost Jose Altuve in the eighth inning with a strained left hamstring when he fell to the ground after legging out an infield single.

“I’m actually feeling better than what I was expecting but we’ll see tomorrow," Altuve said, adding that he would likely have tests done Tuesday.

Alvarez, who had three hits, put the Astros up early with his 417-foot shot to the second deck off Michael Lorenzen (1-1) in the first inning, scoring Michael Brantley.

“It felt great,” Alvarez said in Spanish through a translator. “When I hit the ball, the stadium got super loud, so it was a great welcome back."

The Angels tied it in the second before Houston added two runs in the fourth inning to regain the lead.

Alex Bregman doubled with no outs in the seventh, and then Alvarez connected again — a homer to the bullpen in right center to push the lead to 7-3. Alvarez has three home runs so far this season, and it was his ninth multi-homer game of his career.

Houston starter Luis García (1-0) allowed four hits and three runs with seven strikeouts in 5 2/3 innings for the win. Phil Maton, Rafael Montero and Hector Neris combined to shut out the Angels the rest of the way.

Lorenzen took the loss after allowing four hits and four runs with two walks in 3 1/3 innings.

Max Stassi hit a solo homer for the Angels, who were without star Mike Trout. He sat with a bruised left hand after being hit by a pitch Sunday.

Brantley singled with one out in the first before Alvarez sent a slider into the right field stands with two outs to make it 2-0.

The Angels tied it up on a two-out double by Tyler Wade in the second inning.

Lorenzen’s bases-loaded walk of rookie Jeremy Peña with one out in the fourth put the Astros on top 3-2. Lorenzen then plunked Jose Siri on the hand to score another run and end his night.

With two outs in the sixth, Stassi homered to right field to cut the lead to 4-3 and chase García.

The Astros had runners at first and third with one out in the sixth when Martín Maldonado drove in a run on a sacrifice bunt to make it 5-3.

PUT A RING ON IT

The Astros received their AL championship rings in a pre-game ceremony. The rings feature 104 round diamonds to commemorate the team’s wins in the 2021 season.

Along with diamonds, the rings have blue and orange sapphires for a total weight of about 7.10 carats.

After the rings were handed out, the team unveiled its 2021 AL championship pennant on the wall in left field.

Angels: Team trainer Mike Frostad said Trout had an MRI on Monday that was negative for a fracture. Frostad added Trout’s return to the lineup will depend on pain tolerance. ... 3B Anthony Rendon was scratched from the lineup because of a stomach bug. Rendon said he was unable to keep anything down Monday and Maddon wasn’t sure if he’d be back in the lineup Tuesday.

Astros: Alvarez was activated from the injured list before the game and INF Joe Perez was optioned to Double-A Corpus Christi to make room for him on the roster. RHP Lance McCullers Jr. was transferred to the 60-day injured list to clear a spot for Alvarez on the 40-man roster.