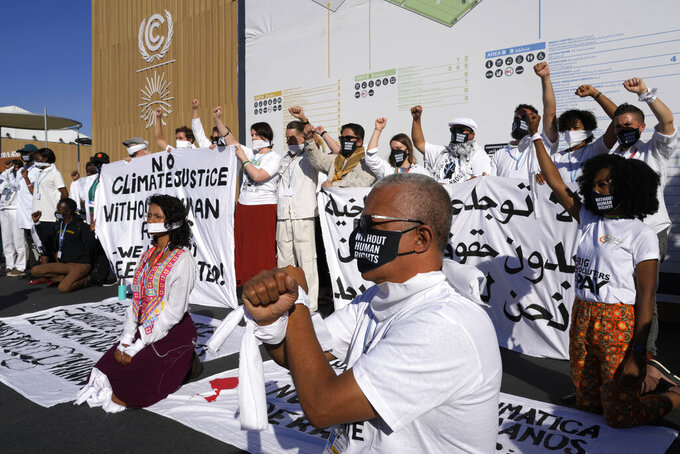 The youngest sister of a jailed Egyptian pro-democracy activist says she is “scared” for her brother after prison authorities told the family they medically intervened after his days-long hunger and water strike and has appealed to U.S. President Joe Biden for help.

Sanaa Seif, the sister of Alaa Abdel-Fattah, said Thursday that she is concerned her brother’s health could have deteriorated and that authorities might have resorted to force-feeding him to keep him alive.

“I’m really scared,” she said. “I don’t know for sure (what happened), but I’m imagining that Alaa is handcuffed somewhere. He’s put on IVs against his will.”

Seif, the youngest of three siblings of late rights lawyer Ahmed Seif, spoke with The Associated Press in the seaside resort of Sharm el-Sheikh where she has been campaigning for her brother’s release at the U.N. climate conference.

She called on Biden, who is scheduled to meet with President Abdel Fattah el-Sissi on Friday in Sharm el-Sheikh, to intervene in her brother’s case.

“I appeal to President Biden, and I hope that he makes an intervention, that he talks, he finds a way. We need help. I still have some hope.”

She called for the Egyptian government to “please find a solution."

— US plan to tap businesses for green finance meets resistance

Amnesty International’s Secretary General Agnès Callamard urged Egyptian authorities to allow an “independent” medical assessment for pro-democracy activist Alaa Abdel-Fattah, who is on a hunger and water strike in an Egyptian prison.

Prison authorities have told Abdel-Fattah’s family that they have intervened medically with the activist.

“We are very alarmed. Why? Because the prison system in Egypt is abysmal in its treatment, medical treatment of prisoners,” said Callamard. “He should have access to independent medical doctor.”

Speaking to The Associated Press at the U.N. climate conference in Egypt’s Red Sea resort of Sharm el-Sheikh, the rights defender called for Egyptian authorities to transfer Abdel-Fattah to a medical facility, chosen by his family.

She also demanded that authorities allow his family to visit him and release him “as soon as his medical condition allows.”

The nature of the medical intervention was not known, and it was not clear if he was moved to a prison hospital. His lawyer, Khaled Ali, said officials at the prison refused to allow a lawyer for the family to visit him, despite approval by the prosecutors’ office for the visit.

Ali said Interior Ministry officials told him the approval was not valid because it was dated Wednesday, adding in a tweet that he was only notified of the approval on Thursday morning.

The head of the International Committee of the Red Cross called on world leaders and negotiators at the U.N. climate conference to pay greater attention and mobilize funds for conflict-stricken nations that are among the most vulnerable to climate change.

ICRC’s Director-General, Robert Mardini, told The Associated Press Thursday that people in countries like Yemen, Somalia and the Horn of Africa where conflicts have been raging for years are facing “double challenge, double adversity, double risks.”

“We are here to shine a spotlight on the very acute situation for people affected by armed conflict and extreme weather events,” he said. “And also, to make the case that climate action and climate finance should go to those communities.”

He said that “close to zero” climate finance is reaching conflict-impacted areas.

The Russian war in Ukraine also doubled the challenges and costs of living for people in Yemen, Somalia and other conflict-hit nations, who are also extremely vulnerable to climate change shocks, he said.

“There is a knock-on effect of the Ukraine international armed conflict,” he said, pointing to the skyrocketing prices of food, energy, fertilizers, and the straining supply chain.

“So doing the same thing in a place like Somalia or Mali is more costly for us, and we need to mobilize more funds from our donors to do the same type of project that we used to do a year ago,” he said.

“They know for the good of their own people that they’ve got to reduce the smog and increase their participation. And if they don’t want to do something any excuse will do,” Pelosi told reporters after speaking at a side event at the U.N. climate talks, known as COP27.

Russia’s war in Ukraine, which has crimped natural gas supplies to Europe and sped the push to expand gas sources from elsewhere, shouldn’t overshadow the transition to renewable energy, Pelosi said.

“I do think that what I’ve heard from all the countries in the EU and NATO and all the rest is about diversification,” Pelosi said. “We cannot have Putin’s invasion of Ukraine be an excuse to abandon our good policy in terms of saving the planet.”

Pelosi also said developing countries struggling to transition to green energy can use new technology to “leapfrog over mistakes made by all of us in our development in order to get to the desired place much faster.”

Environmental groups are complaining of an increase in the number of fossil fuel lobbyists who are registered for this year’s U.N. climate talks in Egypt.

This is an increase of more than 25% compared to the 503 fossil fuel lobbyists counted at last year’s climate talks in Glasgow, they said.

Some of the 636 participants identified as being affiliated with fossil fuel companies are registered as members of 29 national delegations such as the United Arab Emirates and Russia, they said.

“Tobacco lobbyists wouldn’t be welcome at health conferences, arms dealers can’t promote their trade at peace conventions,” the groups said. “Those perpetuating the world’s fossil fuel addiction should not be allowed through the doors of a climate conference.”

Millions of people in Ethiopia facing the region’s worst drought in decades after two years of failed rains told the visiting president of the International Rescue Committee this week their livelihoods have been devastated.

“Our livestock have died, our farming land has dried, we have no access to water,” said Mohamed Adem, one of many people displaced across the region. “We came with nothing,” said another displaced person, Rumia Demimussa.

The IRC president, David Miliband, said his message for the U.N. climate conference is that a “truly African COP” must address the needs of the people he’s meeting.

The Horn of Africa faces both a climate crisis and a hunger crisis, he said. Somalia and Kenya also are affected.

A group of climate activists gathered at the U.N. climate summit’s main venue to protest against fuel fossil companies and other polluters.

The activists chanted slogans like, “kick polluters out, let people in” and sang and danced at the venue’s entrance.

Cansin Leylim, an activist from the 350.org climate group, criticized soft drink giant Coca Cola’s sponsorship of the event as it is a major contributor to plastic pollution.

“The fact that Coca Cola is sponsoring the climate talks is, frankly, a joke,” she said, adding that fossil fuel lobbyists at the summit have surpassed “the combined delegations of the small island states, the developing countries.”

Protests at COP27 are rare and small and all have taken place inside the venue’s Blue Zone, which is considered a U.N. territory.

The protesters held signs that read, “No climate justice without human rights.”

Most of them wore white T-shirts and had their hands tied or a piece of cloth in their mouths, to highlight the plight of jailed activists especially in Egypt where many pro-democracy activists have been behind bars for years.

“We’re in solidarity with Egyptian prisoners of conscience right now,” said Dipiti Bhatnagar, an activist with the Friends of the Earth International, a network of environmental organizations. “All human rights of everyone must be respected in order to achieve the dream of climate justice.”

Another environmental activist from Tanzania, Shamim Navil Nyanda, said human rights should be prioritized at the climate talks.

“We need to put human rights first. We need to look after humanity, and together we can protect the planet,” she said.

Seven Asian countries have saved approximately $34 billion this year by using solar energy instead of fossil fuels, a report by three Asia-based climate think tanks said Thursday. The report comes as officials discuss how to drastically slash emissions at the U.N. climate talks in the Red Sea resort of Sharm el-Sheikh in Egypt.

The report found that the majority of the estimated savings are in China, where solar met 5% of the total electricity demand and avoided approximately $21 billion in additional coal and gas imports in the first half of this year.

“Asian countries need to tap into their massive solar potential to rapidly transition away from costly and highly-polluting fossil fuels,” said Isabella Suarez, one of the report’s authors and energy analyst at the Centre for Research on Energy and Clean Air. “While ambitious targets are important, follow through will be the key thing to watch moving forward.”

A report released Thursday says deforestation in the expansive Congo Basin rainforest increased by 5% in 2021.

The Forest Declaration Assessment said only two of the six Congo Basin countries who signed a 2021 commitment on halting and reversing deforestation by 2030 — Congo and Gabon — are on track with the goal. The report comes as officials and negotiators meet in the seaside resort of Sharm el-Sheikh in Egypt for U.N. climate talks.

“The Congo Basin Forest is at a crossroads,” said Marion Ferrat, senior the lead author of the report. “Deforestation has been low compared to other tropical regions, but we are seeing an upward trend.”

“If this trend continues, we risk losing the largest remaining intact forest in the tropics along with its immense and irreplaceable value for biodiversity, climate, and people.”

It’s estimated that $100 billion is needed to preserve the Amazon Basin each year, said Lawrence Nsoyuni of the Geospatial Technology Group, who urged greater financial pledges.

“If world leaders are serious about their commitments to stop forest loss, they must step up financial support for the Congo Basin,” he said.