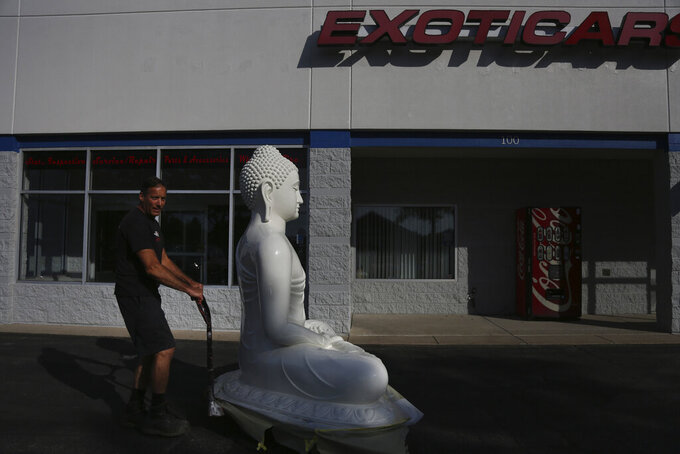 Jessie Wardarski, ASSOCIATED PRESS
Dave Ley, co-owner of Exoticars, an auto restoration shop specializing in classic vehicles, pulls a newly restored statue of the Buddha outside in McCandless, Pa., on Monday, Oct. 11, 2021. Workers repainted and repaired the figure for the Pittsburgh Buddhist Center, which brought it from Sri Lanka over 15 years ago. (AP Photo/Jessie Wardarski)

McCANDLESS, Pa. (AP) — The major branches of Buddhism are often known as “vehicles,” or ways of spiritual practice.

So it’s only fitting that when the monks of the Pittsburgh Buddhist Center needed a major restoration of its outdoor statue of the Buddha, they turned to an auto restoration shop specializing in classic cars.

This partnership of ancient Asian spirituality and modern American craftsmanship came to fruition recently with the reinstallation of the newly refurbished, gleaming white statue at the center’s temple.

Eyes closed and sitting in the lotus position, the Buddha underwent weeks of painstaking work at Exoticars in the town of McCandless, north of Pittsburgh. The statue sat amid an array of vintage vehicles from Bentleys and Corvettes to Porsches and a 1951 Ford pickup.

Workers stripped multiple coats of deteriorating paint and primer — a task that required precision tools as they worked on the Buddha’s hair, depicted in detailed curls.

They also repaired cracks in the fiberglass, added a metal strip to strengthen the statue's base and put on a new coat of white auto body paint, giving it a glasslike sparkle in the sunshine.

The repair job fascinated customers and also the classic car enthusiasts who bring old hot rods and sports cars of their own to Friday evening happy hours hosted by the shop, according to Exoticars co-owner Dave Ley.

“There’s always something here that people follow the progress on,” Ley said, and for a few weeks this fall, the Buddha “was a big hit.”

The Pittsburgh Buddhist Center practices the Theravada vehicle of Buddhism common in Sri Lanka, where the monks are from and where the statue was manufactured. Paid for by a donor, the Buddha was first installed in 2006 at the temple’s previous location in Harrison Township, another suburb.

But when they moved earlier this year to their current location in West Deer Township, also north of Pittsburgh, they began seeking a more permanent solution. A carpenter who had done some previous work for the temple recommended the auto shop.

The result, unveiled at the temple Oct. 24, is “so great” and “beyond my expectation,” Pemaratana said. He expressed gratitude that Ley and his crew stripped the paint by hand rather than using a power sander, which could have damaged the statue.

“I also appreciate his courage to take this job,” the abbot said. “It’s beyond his comfort zone.”

Buddhists use such statues to help focus their devotions and to contemplate the virtues of the religion’s founder.

According to Pemaratana, this particular one depicts the Buddha in a pose symbolizing samadhi, or stillness. The monks regularly take it to an annual festival celebrating the birth of the Buddha, a gathering that brings together Pittsburgh’s various Buddhist groups.

Pemaratana turned out at Exoticars for one of the Friday happy hours, delighting many there who he said had never before come face-to-face with a Buddhist monk.

“They have seen monks in the movies, but not a real monk,” the abbot said. “I’m so happy for the relationship we built.”

“We figured we’re getting some good karma,” he said.

Ley also tried out what could become a slogan for the shop: “We work on everything from Bentleys to Buddhas.”