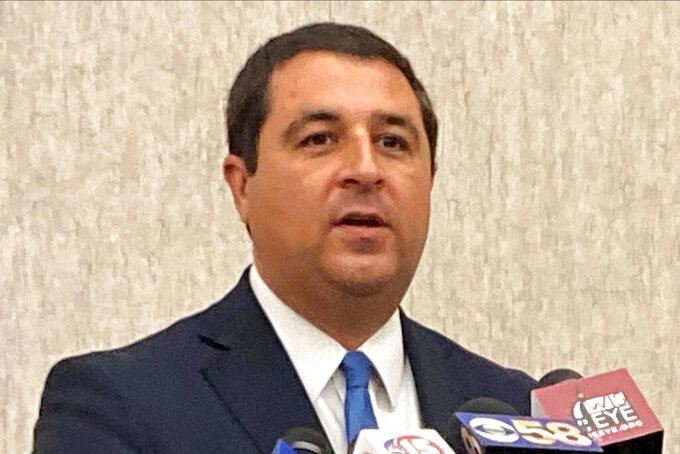 Fond du Lac County District Attorney Eric Toney said around 1 a.m. that he didn't see a way to victory even though unofficial results showed that with 99% of the vote counted incumbent Democrat Josh Kaul held a narrow lead of less than a percentage point. Under Wisconsin law, a recount can only be ordered if the margin of defeat is less than a point.

Toney told supporters at an election night gathering that he called Kaul and conceded.

“We just don't see a pathway to victory given what appears to be the limited number of votes out there,” Toney said.

His campaign spokesperson, Courtney Mullen, didn't immediately respond to an email asking if Toney would seek a recount.

Kaul said in a statement that he was grateful Wisconsin residents have put their trust in him for another four years.

“I look forward to the work ahead of us as we continue to deliver results and work to build safer and stronger communities across the state,” he said.

The attorney general race was largely overshadowed by the race for governor and U.S. Senate but it was still a critical contest in battleground Wisconsin, one of the many states nationwide where both parties have turned to attorneys general over the last decade to challenge the other side's policies in state and federal court.

Since Kaul won his first term in 2018, he has filed a lawsuit seeking to overturn the state's 173-year-old abortion ban, defended 2020 election results that showed Democrat Joe Biden won the state and joined a number of multistate lawsuits challenging Trump administration policies. Those have included a rollback of the Endangered Species Act and changes to the Affordable Care Act that would have removed protections for women, LGBTQ individuals and non-English speakers.

Kaul has questioned whether Toney, the Fond du Lac County district attorney, would use the attorney general's office to aid a Donald Trump victory if he seeks the presidency in 2024. Toney has countered by portraying Kaul as soft on crime

He attacked Kaul for delays in crime lab test results, pushing to end cash bail and understaffing at the state Department of Justice. He has called for getting tough on voter fraud and cracking down on crime in Milwaukee by allowing the attorney general to directly prosecute defendants there rather than leaving cases up to local prosecutors.

He also pledged to enforce the state's 1849 law banning abortions. That included a call to allow district attorneys to prosecute abortions in adjoining counties before backing off that stance last month.

Kaul built his campaign largely around the abortion issue, touting his lawsuit to overturn the ban and promising that he would never use Justice Department resources to prosecute anyone involved in an abortion. He has said voter fraud is not a significant problem in the state.

Toney told The Associated Press in September that there was no widespread fraud in the 2020 election and Biden won the state fairly. He declined to say whether he would support Trump should he run in 2024.

Learn more about the issues and factors at play in the midterms at https://apnews.com/hub/explaining-the-elections.