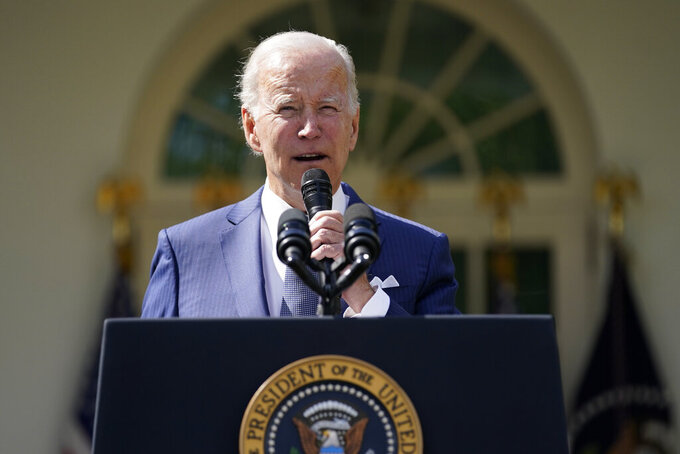 WASHINGTON (AP) — The Biden administration is laying out its plan to meet an ambitious goal of ending hunger in the U.S. by 2030, including expanding monthly benefits that help low-income Americans buy food.

The administration, in a plan released Tuesday, is also seeking to increase healthy eating and physical activity so that fewer people are afflicted with diabetes, obesity, hypertension and other diet-related diseases. It said it would work to expand Medicaid and Medicare access to obesity counseling and nutrition.

Biden is hosting a conference this week on hunger, nutrition and health, the first by the White House since 1969. That conference, under President Richard Nixon, was a pivotal moment that influenced the U.S. food policy agenda for 50 years. It led to a greatly expanded food stamps program and gave rise to the Women, Infants and Children program, which serves half the babies born in the U.S. by providing women with parenting advice, breastfeeding support and food assistance.

Noreen Springstead, executive director of the anti-hunger organization WhyHunger, said the whole-of-government nature of the summit will hopefully produce greater alignment across the multiple federal agencies that deal with hunger issues — from the USDA and Health and Human Services to the Bureau of Indian Affairs. That, ideally, would help Biden “set the North Star that nutritious food is a human right for all people.”

Springstead noted that a truly comprehensive approach to hunger and nutrition would have to include a major commitment from charities and philanthropic foundations. It would also likely include raising baseline salaries and employers paying their workers "wages that are livable so that they’re not standing in a food line.”

Over the years, cuts to federal programs coupled with stigmas over welfare and big changes to how food and farming systems are run have prompted declines in access to food.

Biden, a Democrat, is hoping this week's conference is similarly transformative. But the goal of Nixon, a Republican, also was “to put an end to hunger in America for all time.”

And yet 10% of U.S. households in 2021 suffered food insecurity, meaning they were uncertain they could get enough food to feed themselves or their families because they lacked money or resources for food, according to the Food and Drug Administration.

To succeed, Biden needs buy-in from the private sector and an increasingly partisan Congress. Some of the goals sound reminiscent of former first lady Michelle Obama’s Let’s Move initiative to tackle childhood obesity and promote healthy eating. The conference also will highlight the need for access to better, healthier food and exercise.

In response to the Biden plan's release, Partnership for a Healthy America hailed the emphasis on nutrition and health, saying that simply providing more food without prioritizing nutritional value would simply create different problems.

"We applaud the administration’s stated desire to shift from a mindset of treating diet-related diseases to preventing them from occurring in the first place," the organization said in a statement.

Under the White House plan, Supplemental Nutrition Assistance Program eligibility would be expanded, children would get better access to free meals, and summer benefits would be extended to more schoolkids. Such changes would require congressional approval.

The other tenets of the strategy include the development of new food packaging to truth-check the “healthy” claims for some products, expanding SNAP incentives to select fruits and vegetables, providing more programs to encourage people to get outside and move, and boosting funding for research.