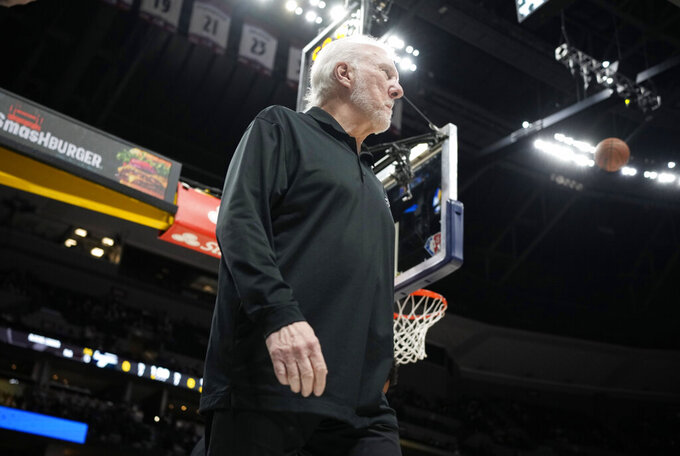 DENVER (AP) — Not everyone thought Nikola Jokic should have won the MVP award last season. His Denver teammates did, and one, in fact, predicted he would repeat.

“I’ve never seen nobody play his pace. The slow Euro-step is unstoppable,” JaMychal Green said. “A lot of stuff he does is unstoppable. He’s going to be the MVP again.”

Jokic added more fodder for debate Friday night. He had 32 points, 16 rebounds and overcame six turnovers to lead the Nuggets past the San Antonio Spurs 102-96.

Jokic followed up his 27-point, 13-rebound effort in Phoenix on Wednesday with another strong game. He added seven assists and three steals for Denver. He was serenaded with cheers of “MVP! MVP!” when he hit a fadeaway jumper from 13 feet that gave the Nuggets a 100-93 lead.

Keldon Johnson led the Spurs with 27 points, two shy of his career high, and Derrick White had 16 points.

San Antonio has evolved into an ensemble team without a standout offensive star. On Wednesday night, Devin Vassell was the leading scorer with 19 points. On Friday, he scored just six on seven shot attempts. Against Denver, it was Johnson’s turn to lead the offense.

The Nuggets do have a standout star in Jokic , whose success is a result of craftiness, not speed. It’s a trait that he says makes him better.

“I really think because I’m slow. That’s the pace that fits me and I’m comfortable in that pace,” he said. “You can see how the league is going, everybody is so athletic, so fast, they can jump, they can go by a guy.”

The Nuggets led by three at halftime and 83-72 early in the fourth when San Antonio reeled off 10 straight points to make it 83-82. Facu Campazzo hit a layup, Jeff Green dunked and Jokic scored four points during an 8-2 Denver run.

White gave the Spurs one last chance with a 3-pointer with 1:06 left, but Monte Morris made a jumper that sealed the win for the Nuggets.

“I’m thrilled. We had 20 turnovers and shot 25% from 3 and we still continued to compete,” Popovich said. “We’ve got to take care of the ball better and make better decisions.”

The Spurs trailed 55-50 before scoring nine straight to take a lead. But Jokic led a Denver rally. Over the next eight minutes, he had seven points and seven rebounds, drove full court for a layup and found Campazzo for a driving layup that put the Nuggets up by 10.

Spurs: Have lost eight straight regular-season games in Denver, dating to the 2017-18 season. San Antonio’s last win overall in Denver came in Game 1 of the 2019 first-round playoff series. ... Derrick White grew up in Parker, Colorado, and played one season at the University of Colorado.

Nuggets: G Jamal Murray received a loud ovation when the entire team was introduced before the tip. Murray, who had surgery on his left ACL in April, was shooting with the team before the game. ... Michael Porter Jr. scored just seven points and missed his first four 3-point attempts before draining one in transition.

Denver rookie guard Bones Hyland was given the job of revving up the home crowd before the start of the game and made the most of it. Hyland, the 26th pick in the 2021 draft, got the fans going with a quick, enthusiastic speech and earned cheers without ever logging a minute in the game.