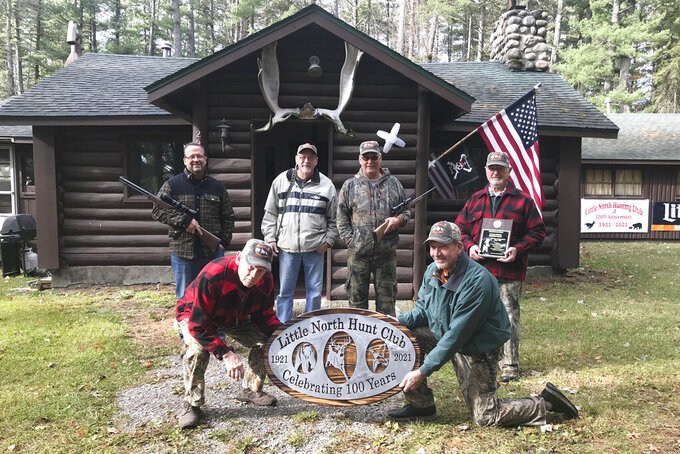 Darby Hinkley, ASSOCIATED PRESS
Some members of Little North Hunt Club, front from left, are Bob Bont and club president Larry Marshke, back row from left, are Dave Marshke, Kim Adams, Don Allender, and past president Ray Marshke, pose on the north end of Hubbard Lake, Mich., on Nov. 12, 2021, as they gather to get ready for rifle hunting season. The club's 100th anniversary was on Nov. 14, 1921. (Darby Hinkley//The Alpena News via AP)

HUBBARD LAKE, Mich. (AP) — A century of stories, memories and camaraderie lies between the walls of the Little North Hunt Club lodge.

Nestled nine miles back in the woods on Hubbard Lake’s north end, Little North Hunt Club is part of the Consolidated Hunting League, which consists of 57 clubs located on 15,000 acres of land, or about 23 square miles, The Alpena News reports.

Little North Hunt Club was established on Nov. 14, 1921, said Larry Marshke, who has been club president for the last four years. Shortly after the main lodge was built, a second Marshke/Adams cabin was built a little further back on the property.

His grandfather became a member in 1932, and he remembers, as a young boy, coming up from the Detroit area, where many of the members hail from. His uncle Ray Marshke, who was president for 26 years, lives in Lachine.

“Most of our members, and there’s 25 of us, live downstate,” Larry Marshke said.

He said the original members were recruited, but the remaining members have continued the family tradition over the years.

He explained that the Little North Hunt Club property is currently about 1,200 acres, but it started with less than 40.

Oscar Larson was the original property owner who started the club.

“He was a lumberjack,” said Jim Gerlach, whose father, Wallace Gerlach, was club president from 1981 to 1991.

The current members said east Detroit and Mount Clemens area businessmen and their families were recruited to join the club.

“They just went down to Detroit, found a bunch of guys that might be interested in joining a club, they brought them, and their money, back up north, and they bought pieces around the original 40, over the years, and here we are at 1,200,” Larry Marshke said, “three or four generations later.”

He said keeping up the property is a lot of work, but they have a lot of fun, too.

Things have really changed since the early years at the club, even from when Larry Marshke was a young boy.

“There was no running water,” he said. “We took baths in the sink. And we still have one outhouse.”

It’s not just a boys club, either. A few women have hunted the property over the years, too.

“The two women were better hunters than the men,” said Bob Bont.

One of the club’s members shot a 14-point buck back in the 1940s, but that hunter’s name is unknown.

“It was a beauty,” Larry Marshke said of that buck.

He said deer are getting harder to find.

“The deer hunting isn’t as good as it used to be,” he said. “But the bear hunting is. We’ve got bear crawling all over the place … We’ve had five bear taken off the property in the last three years, through permit.”

He explained that the deer herd has not been as good for the past three years, but he is hopeful for cold weather this year which keeps the deer moving around.

He said the deer have generationally migrated to where the food is — down on the farms, which the farmers don’t like, either.

They have also enrolled their piece of property in a QFP (Quality Forest Program), which is a 20-year program with logging done every three years to help generate tree growth, which is good for the deer herd.

Larry Marshke said the beauty of the land, the seclusion, and the tradition keep him and other members coming back year after year.

“The cabin, the history, it’s quiet,” he said. “I remember when I was a kid, we didn’t even have electricity up there.”

They had to pump water, and use propane lights.

His dad, the late Jerry Marshke, got him and his brother, Dave, into the club.

“It was kind of a family thing,” said Larry Marshke, of New Baltimore on Lake St. Clair.

“I’ve been coming up here for 54 years,” Dave Marshke said. “It’s a special place. You can never replace these memories up here, with the guys, and the camaraderie. I’m very fortunate.”

Larry Marshke said the feeling you get as you head further north is more than just relief. It’s peaceful being away from the hustle and bustle of city life.

“People downstate who have never been up here, they just can’t even imagine what it’s like,” said Kim Adams.

“It’s got a little bit of everything,” Larry Marshke said of the Little North Hunt Club property.

“It’s got a trout stream right in the middle,” said Jim Gerlach, 83. “And lots of memories.”

“And 500 acres all around Little North Creek is all cedar swamp,” Larry Marshke added.

He said swamplands can be a good place to find deer.

“This year looks more promising,” he said. “We’ve seen some signs, and our food plots seem to be kicking in. We’ve had some deer eating off of them, so that’s good.”

The men said it’s quite special to have a century of history at a hunting club.

“There aren’t many around that have survived 100 years,” Jim Gerlach said.

“Property gets divided, people die off, this next generation are not hunting like the older generation did,” said Ray Marshke. “So, that’s one thing that’s unique about ours — it’s been going, generation to generation.”

He said all the club members take care of the land.

“We’re putting back into the land what the land gave us,” Larry Marshke added. “This is pretty much home for us.”

They now carry on the task of mentoring the younger hunters.

“It’s our obligation to make it fun for them, the way our fathers and uncles and grandfathers made it fun for us,” Adams said.

“My grandfather, my dad, my uncle, me, and now my son, a future member, it’s been special,” said Jeff Karash. “It’s all about family and friends … It’s a tradition. You just don’t want to miss it, whether you hunt or you don’t hunt.”