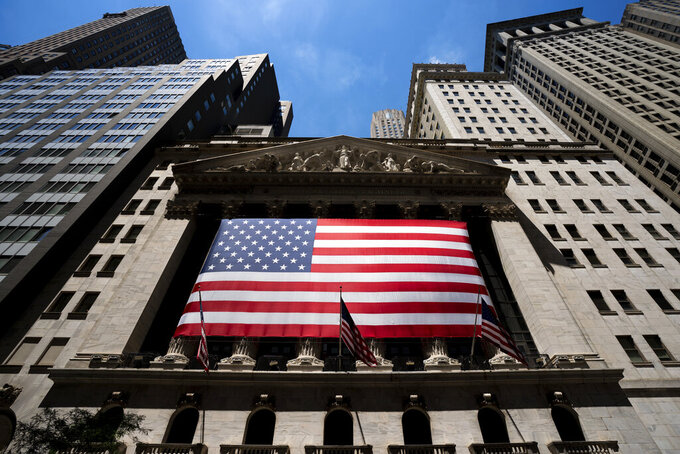 Julia Nikhinson, ASSOCIATED PRESS
The New York Stock Exchange on Wednesday, June 29, 2022 in New York. Americans with stock portfolios or retirement investment plans would likely prefer to forget the last six months. The S&P 500, Wall Street’s broad benchmark for many stock funds, slumped TK% through the end of June after starting the year at an all-time high. It’s the worst start to a year for stocks in decades. (AP Photo/Julia Nikhinson)

The S&P 500, Wall Street’s broad benchmark for many stock funds, closed the first half of 2022 with a loss of more than 20% after starting the year at an all-time high. It’s the worst start to a year since 1970, when Apple and Microsoft had yet to be founded.

Investors have been grappling with uncertainty and fear this year following a sharp rise in interest rates as the Federal Reserve and other central banks scrambled to tame the highest inflation in more than 40 years. Higher rates can bring down inflation, but they also slow the economy, raising the risk of a recession. That's helped drag down the value of stocks, bonds, cryptocurrencies and other investments.

The Fed has been at the center of the market’s downturn, raising its key short-term interest rates three time this year. Its most recent increase earlier this month was triple the usual amount and its biggest hike since 1994. More outsized increases are almost certain.

“You can argue that they’re just playing the hand they were dealt, but the reality is they got caught a little bit behind the curve and their pivot toward a much more aggressive policy stance has been the reason the market has sold off,” said Ross Mayfield, investment strategist at Baird.

ONE WINNER, MANY LOSERS

Technology companies, retailers and other stocks that were big winners during the pandemic have been among the biggest losers this year. That includes a more than 36% tumble for Tesla, a 71% nosedive for Netflix and a more than 50% plunge for Facebook parent Meta.

Rising bond yields have made these stocks look overpriced relative to less-risky corners of the market, such as utilities, household goods makers and health care firms. These are often called “value” stocks to distinguish them from stocks of high-growth companies.

Energy is the lone gainer this year among the 11 sectors in the S&P 500. The sector is up more than 29% so far, buoyed by surging oil and gasoline prices.

Of the 21 stocks in the index that have risen more than 20% this year, all but seven are energy companies.

The soaring prices at the pump are the result of a classic squeeze.

Demand surged for gasoline and other oil products after the economy roared out of the cavern created by the coronavirus. At the same time, supplies for crude oil and gasoline have remained tight. The invasion of Ukraine upset a key energy-producing region of the world, with sanctions blocking oil from Russia, which ranked third in the world for oil production at the end of last year.

Meanwhile, refineries have less ability to turn oil into gasoline in the U.S. after several shut down during the pandemic. U.S. refining capacity has dropped for two straight years, according to the U.S. Energy Information Administration.

As a result, gasoline prices have shot to records this year, with the national average for a gallon of regular topping $5 per gallon earlier this month, according to AAA.

That’s meant misery for many drivers, but a nice payoff for investors who bet on energy stocks.

For such strength to continue, though, worries about a recession would have to abate. Recessions have historically led to drops in oil prices by destroying demand. And over the last week, stocks of energy companies have dropped even more than oil prices as some investors grew more fearful of just such a scenario, according to strategists at Barclays.

Sometimes even the calm one in the group loses their cool.

Bonds are supposed to be the steadier, more reliable part of a portfolio. But they not only slammed investors with losses in the first half of this year, they’re on pace for one of their worst performances in history.

High-quality, investment-grade bonds were down 11.3% for the first six months of 2022, as of Monday. Any down year is a notable thing for bonds. The Bloomberg US Aggregate index, which many bond fund use as their benchmark, has had just four losing years on records going back to 1976.

This year’s losses are entirely the result of high inflation and the Fed’s response to it. Inflation is generally anathema to investors because it erodes the purchasing value of the fixed payments bonds will make in the future.

The yield on the 10-year Treasury has already more than doubled this year. It stood at 2.97% Thursday. More pressure may be on the way as the Fed keeps raising rates, though some analysts say the worst of the damage may have passed.

Supporters of cryptocurrencies have touted them as, among other things, a good hedge against inflation and a safe haven when the stock market slumps. They’ve been neither of those things this year.

Bitcoin sank from nearly $69,000 in November to below $20,000 this month, partly due to the same forces that pummeled stocks: inflation and higher interest rates.

Some events unique to the cryptocurrency industry also factored in and eroded investors’ confidence. A so-called stablecoin collapsed, costing investors around $40 billion. A hedge fund dedicated to digital assets was reportedly facing liquidation. And some bank-like companies, which take cryptocurrencies as deposits and then lend them out, suspended withdrawals as they scrambled to shore up their finances.