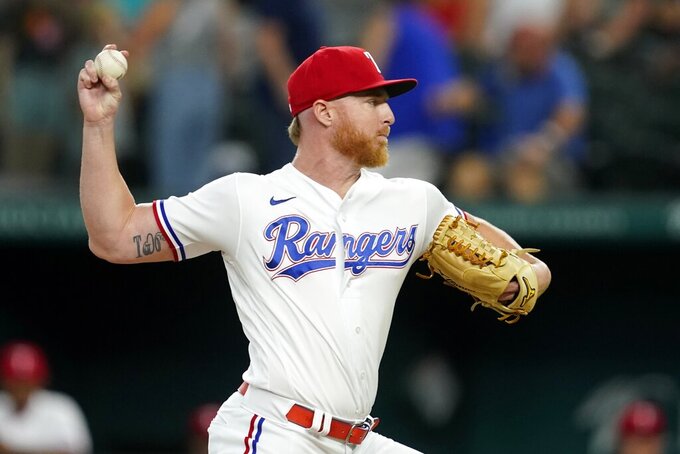 ARLINGTON, Texas (AP) — Texas Rangers right-hander Jon Gray will miss at least four to six weeks after being placed on the injured list Tuesday with a left oblique strain.

Team president Jon Daniels said Gray will not resume throwing for at least two to three weeks, then will need a similar amount of time to build back up to get back on the mound. That could keep keep Gray out until at least mid-September for the Rangers, who were a season-high 10 games under .500 going into Tuesday night's game against Baltimore.

Any setbacks in his rehab could mean the end of the season for Gray (7-6, 3.83 ERA), who signed a $56 million, four-year deal in free agency last winter and was the team's opening day starter.

Before leaving in the middle of an at-bat in the second inning against the Orioles on Monday night, Gray was in the best stretch of his first season in Texas. He was 6-2 with a 2.96 ERA his previous nine starts.

“It was exciting to see, potentially like an ace in the making,” manager Chris Woodward said. "His mentality, everything was kind of coming to that. You could see it and feel it. ... I really liked where he was at, from a personal standpoint and physical standpoint.”

The pitcher looked uneasy after Anthony Santander swung and missed on a pitch in the dirt to make the count 1-2 with the bases loaded. Gray walked around the mound and then left after a brief visit from an athletic trainer and Woodward. Gray, who was charged with four runs in 1 1/3 innings and took the loss, had an MRI on Tuesday.

“It was tough to sleep last night knowing your best arm is potentially down,” Woodward said before the team announced the MRI results and IL placement. “It’s not an easy one to come back from quickly. It’s not something you pitch through or play through."

The Rangers recalled left-hander Taylor Hearn and right-hander Josh Sborz from Triple-A Round Rock. Hearn, been sent down just a week ago, was able to return to replace the injured Gray, but will still pitch out of the bullpen. Sborz took the spot on the active roster opened when reliever Matt Bush was traded to Milwaukee late Monday night.

Daniels said Texas would make another roster move later this week to add someone to take Gray’s rotation spot. Gray would have pitched this weekend at home against the Chicago White Sox.

This is the third IL stint this season for Gray, who went on the list after each of his first two starts. He was out April 9-19 because of a right middle finger blister, then after his next start April 20 was out until May 3 because of a low-grade left knee sprain.