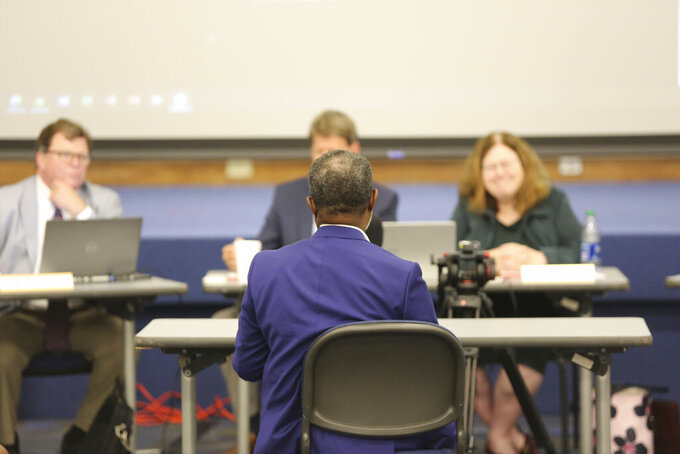 Jeffrey Collins, ASSOCIATED PRESS
A citizen testifies at a public meeting of a Senate subcommittee on redistricting on Wednesday, July 28, 2021, in Sumter, S..C. Senators are holding 10 public hearings across the state. (AP Photo/Jeffrey Collins)

SUMTER, S.C. (AP) — South Carolina's rapid growth isn't happening in rural areas, and people who live outside places like Greenville, Myrtle Beach and the state's suburbs of Charlotte, North Carolina, are worried this year's redistricting is going to take away more of their dwindling power.

The state's population grew to 5.1 million peopl e in the 2020 U.S. Census, and lawmakers are using that number to draw new districts for the state House, Senate and U.S. House districts.

Each district has to have roughly the same number of people. Thus, each of South Carolina's 46 Senate districts will have about 111,000 people. Currently, only 14 of the state's 46 counties have that many citizens.

Many rural counties end up like Lee County, where two senators split the county with about 17,000 people. Neither senator lives in the county along Interstate 20 between Florence and Columbia.

“We are struggling. We have struggled all my life," said Becky Yarborough, a lifelong Lee County resident. “Economic base, job opportunities — we don’t have a lot of opportunities.

Yarborough was one of more than 50 people who showed up Wednesday night for a second meeting of a state Senate subcommittee hearing from the public before it draws new maps. So many people came they had to bring in more chairs. The House has its own committee that will start meeting next week.

Lawmakers are waiting for the full release of U.S. Census data next month before starting to draw lines.

The meeting in Sumter County, population 107,000 was about as rural as the committee would get. There is another meeting in August in Orangeburg, which with 86,000 people is the 17h biggest of South Carolina's 46 counties.

Smaller counties understand the numbers are against them. But their main request is not to be split in so many ways.

A speaker at the first Senate public meeting on Tuesday asked lawmakers to keep Saluda County whole. The county of 20,000 people west of Columbia is split between three senators, none of whom live there. Union County in the Upstate has the same problem.

“We are a unique community,” said Sharon Holloway, the county's Democratic Party chairwoman.

Keeping counties together can be tough. Incumbents often draw districts to their favor, which trickles down to counties that have no resident lawmaker. Two fairly large counties — Lancaster and Greenwood — now have no resident senator because of retirements or election losses. Lancaster County is in the Charlotte suburbs and one of the fastest growing areas of the state.

Azilee Billie testified Tuesday that people in rural areas may be behind before the oce-a-decade count of everyone in the U,S, is even finished.

“Sometimes it’s like pulling teeth to get them to participate in the Census," she said.