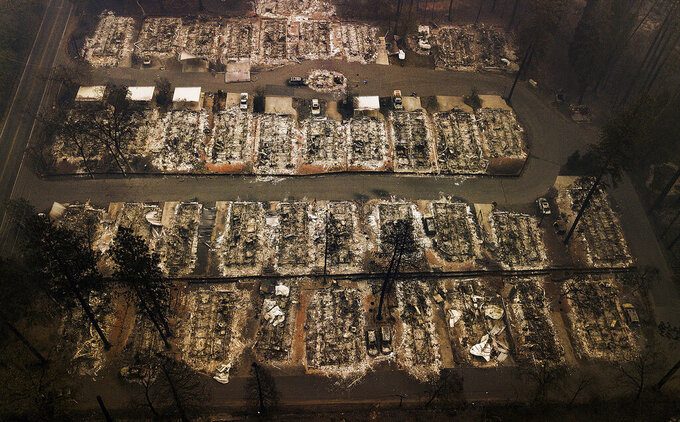 Noah Berger, ASSOCIATED PRESS
FILE - This Nov. 15, 2018, aerial file photo shows the remains of residences leveled by the Camp wildfire in Paradise, Calif. Pacific Gas & Electric says it may shut off power to about 44,000 customers in California beginning on Monday, Oct. 11, 2021, due to potentially dry, gusty winds that could raise the risk of wildfires. The National Weather Service issued a red flag warning of extreme fire danger between Sunday and Tuesday evening. (AP Photo/Noah Berger, File)

SAN FRANCISCO (AP) — Pacific Gas & Electric said it may shut off power to about 44,000 customers in California beginning on Monday due to potentially dry, gusty winds that could raise the risk electrical equipment sparking fires.

The National Weather Service issued a red flag warning of extreme fire danger starting late Sunday, when offshore winds are expected to develop across parts of northern and central California. The warning extends to late Tuesday and the strongest winds are expected on Monday.

The high winds, combined with bone-dry vegetation caused by the drought, could increase the risk of trees falling on power lines and sparking a wildfire, PG&E said.

The utility began intentionally shutting off power in the fall of 2019 to prevent wildfires, after an investigation determined the Camp Fire that wiped out most of the town of Paradise was sparked by its equipment. The company filed for bankruptcy and pleaded guilty to 84 counts of involuntary manslaughter related to the 2018 fire.

It also faces numerous criminal charges for fires caused by its fraying equipment, including involuntary manslaughter charges filed last month in connection to a wildfire near the city of Redding last year that killed four people.