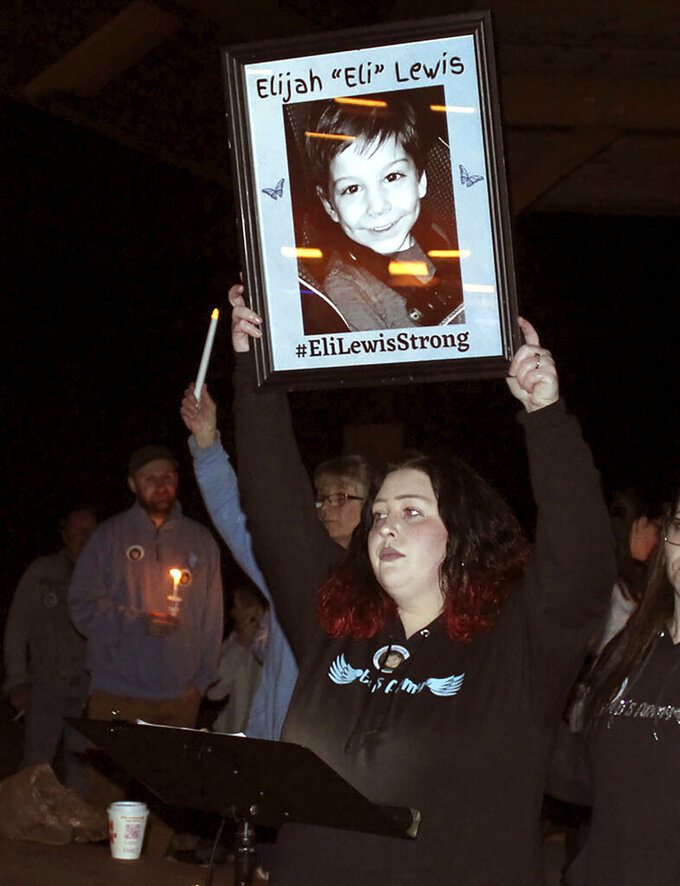 Dean Shalhoup, ASSOCIATED PRESS
MJ Morrison, an aunt of Elijah Lewis' oldest brother, holds aloft a portrait of Elijah during a candlelight vigil at Watson Park in Merrimack, N.H, Sunday, Oct. 24, 2021. Hundreds of people gathered for the candlelight vigil for the young boy from New Hampshire who went missing a month ago and was recently found dead. (Dean Shalhoup/The Telegraph via AP)

MERRIMACK, N.H. (AP) — Hundreds of people gathered for a candlelight vigil held Sunday for a young boy from New Hampshire who went missing a month ago and was recently found dead.

The vigil was held in remembrance of 5-year-old Elijah Lewis, whose remains were located by authorities Saturday in a wooded location in Massachusetts, according to the Nashua Telegraph. Authorities confirmed the body found Saturday was Lewis.

The office of the Massachusetts Chief Medical Examiner said the cause of Lewis’ death is still under investigation and will most likely take another month for specific findings.

Participants of the vigil in Merrimack’s Watson Park lit candles and listened to MJ Morrison, an aunt of Lewis’ oldest brother, memorializing Lewis and his love for the color blue.

Morrison had been a member of a Facebook group started by family and friends to help find Lewis. She said the family has shifted their attention to getting justice for Lewis.

A week ago, Lewis’ mother Danielle Dauphinais, 35, and her partner, Joseph Stapf, 30, were arrested and charged with witness tampering and endangering the welfare of a child. They will remain in custody and plan to meet with their lawyers to discuss bail hearings.

They are both scheduled to appear in court in December.