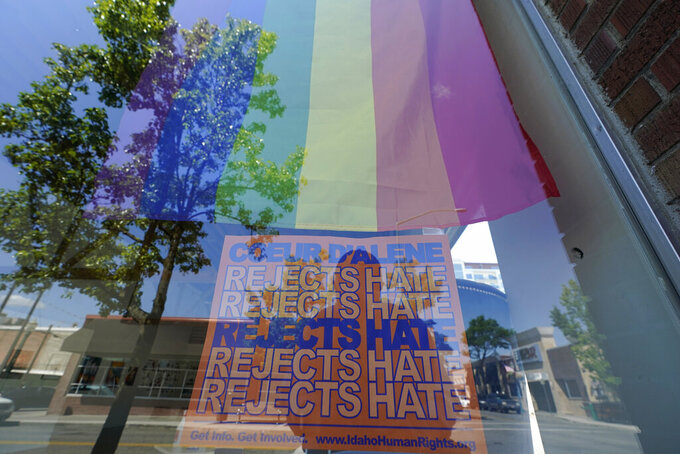 Ted S. Warren, ASSOCIATED PRESS
FILE - A sign that reads "Coeur d'Alene Rejects Hate" is shown under a Pride flag in the window of the Emerge CDA art gallery, Monday, July 18, 2022, in downtown Coeur d'Alene, Idaho. One of the 31 members of a white supremacist group arrested near an Idaho Pride event earlier in the year has pleaded guilty to disturbing the peace. (AP Photo/Ted S. Warren, File) 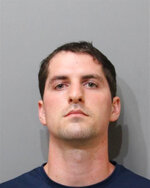 COEUR D'ALENE, Idaho (AP) — One of the 31 members of a white supremacist group arrested near an Idaho Pride event earlier this year has pleaded guilty to disturbing the peace.

Prosecutors said Sisenstein and the other Patriot Front members planned to violently disrupt a Pride celebration in the northern Idaho city of Coeur d'Alene. The men were arrested June 11 after they were found packed into the back of a U-Haul truck with riot gear near the city park where the celebration was underway. All 31 were initially charged with conspiracy to riot, a misdemeanor.

In exchange for Sisenstein's guilty plea, prosecutors asked that he be sentenced to roughly six months in jail, but that the jail time be waived if he successfully performs two years of unsupervised probation. First District Judge Mayli Walsh agreed, and also ordered Sisenstein to pay a $500 fine.

Sisenstein is the first person in the group to plead guilty to a charge in connection with the arrests. Several others have pleaded not guilty and are awaiting trial.

Coeur d’Alene Chief Criminal Deputy Attorney Wes Somerton declined to comment on specific cases, citing "the sensitivity of negotiations and to help ensure fair trials for those who choose to seek such an avenue,” Somerton said via email.

Patriot Front is described by the Southern Poverty Law Center as “a white nationalist hate group” that formed after the deadly “Unite the Right” rally in Charlottesville, Virginia in 2017.

“Patriot Front focuses on theatrical rhetoric and activism that can be easily distributed as propaganda for its chapters across the country,” the Southern Poverty Law Center said of the group.

The group’s manifesto calls for the formation of a white ethnostate in the United States, the Southern Poverty Law Center said.