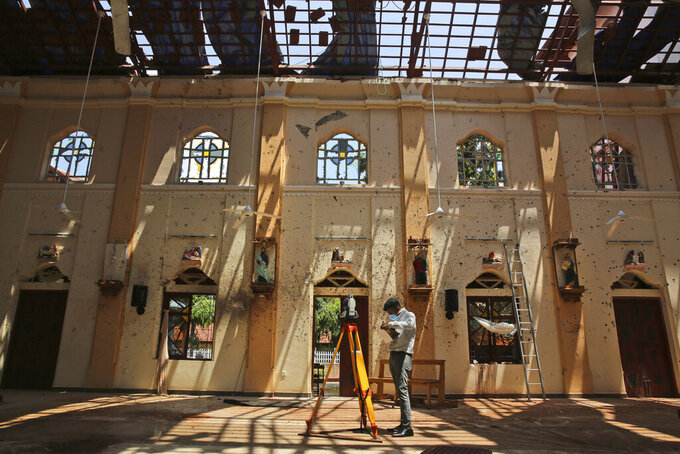 Manish Swarup, ASSOCIATED PRESS
FILE- Sunlight steams in from gaping holes, as a surveyor works at St. Sebastian's Church, where a suicide bomber blew himself up on Easter Sunday in Negombo, north of Colombo, Sri Lanka, April 25, 2019. A Sri Lankan court has issued a summons on Friday, Sept. 16, 2022, ordering ex-president Maithripala Sirisena to appear in a case alleging he failed to prevent suicide bomb attacks in 2019 that killed nearly 270 people. (AP Photo/Manish Swarup, File)

COLOMBO, Sri Lanka (AP) — A Sri Lankan court issued a summons on Friday ordering an ex-president to appear in a case alleging he failed to prevent suicide bomb attacks in 2019 that killed nearly 270 people.

The court ordered ex-President Maithripala Sirisena to appear on Oct. 14 in a complaint filed by a Catholic priest and a worshipper saying his negligence led to the near-simultaneous bomb blasts in three churches and three tourist hotels on Easter Sunday 2019.

The complaint was filed by the Rev. Cyril Gamini, spokesperson for the archdiocese of Colombo, and Jesuraj Ganeshan, who said he lost one leg in a blast at a church where he was attending Easter services. It says Sirisena, who was also defense minister, minister in charge of law and order, and head of the armed forces, failed to take action in response to many prior warnings that a radical Islamic group was preaching violence against non-believers.

It also said Sirisena left on a personal trip to Singapore just days before the blasts without naming anyone to oversee his duties while he was away.

The failure to prevent the blasts has been blamed on a communication breakdown and lack of coordination between Sirisena and current President Ranil Wickremesinghe, who was then prime minister in the coalition government.

Authorities have filed charges against several people allegedly involved in the attacks, but the local Catholic church has said the real culprits could still be at large.