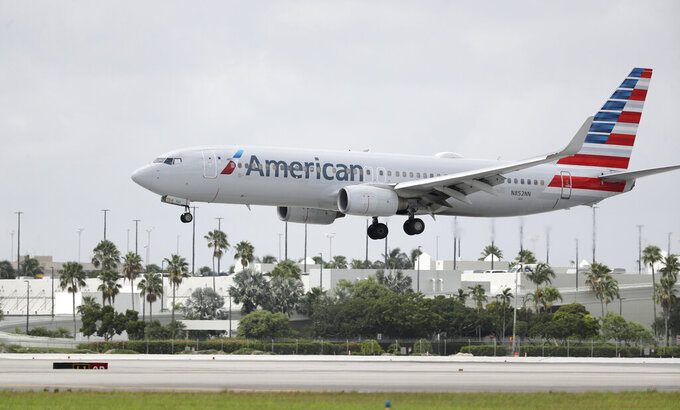 Wilfredo Lee, ASSOCIATED PRESS
FILE - In this July 27, 2020, file photo, an American Airlines Boeing 737-823 lands at Miami International Airport in Miami. Flight attendants at American Airlines say they are sometimes forced to sleep in airports because the airline fails to book hotel rooms for employees on the road. Unions for flight attendants and pilots filed grievances against American this week, charging the airline with violating their contracts and putting employees in danger. The president of the flight attendants' union says some of her members have slept outside baggage claim because they didn't have a hotel room. Leaders of the pilots' union say pilots have been put in unsafe hotels or told to walk to the hotel in the middle of the night when flights arrive late. (AP Photo/Wilfredo Lee, File)

FORT WORTH, Texas (AP) — Passengers on American Airlines has been dogged by flight delays this summer, and now flight attendants and pilots say the airline is failing to secure hotel rooms, sometimes forcing employees to sleep in airports.

Unions for flight attendants and pilots filed grievances this week with American, charging that the company is violating its contracts and putting employees in danger.

“We have flight attendants sleeping in airports and outside of baggage claim due to the company not providing hotel accommodations in a timely manner,” Julie Hedrick, the president of the Association of Professional Flight Attendants, said in a note to members.

Hedrick said the company has failed to provide “suitable” hotel accommodations and transportation after situations such as delayed or canceled flights. She called it a recurring problem that is affecting crews’ ability to get required rest.

Leaders of the Allied Pilots Association said they get reports of pilots waiting hours for a hotel, being put up in unsafe hotels or told to walk to hotels in the middle of the night. The union said the situation could lead to violations of federal rest rules designed to prevent pilots from flying while fatigued.

In a statement, the airline said, "Taking care of our crew members while they are away from home is a priority for American. We are looking into the concerns raised by APA and APFA.”

Union officials said the lodging and transportation problems have gotten worse as air travel has bounced back to about 80% of pre-pandemic levels.

American and Southwest Airlines each struggled through thousands of flight delays in June, according to tracking service FlightAware. The carriers blamed a rash of summer thunderstorms, but unions cited labor shortages after carriers convinced many workers to quit during the pandemic.