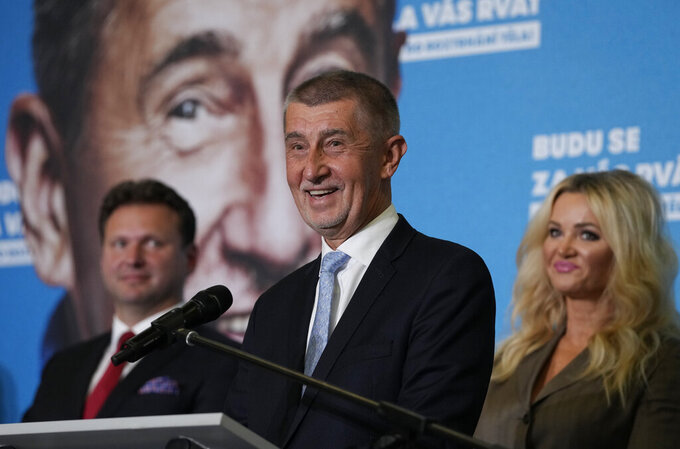 Petr David Josek, ASSOCIATED PRESS
Czech Republic's Prime Minister and leader of centrist ANO (YES) movement Andrej Babis addresses the media after most of the votes were counted in the parliamentary elections, Prague, Czech Republic, Saturday, Oct. 9, 2021. Prime Minister Andrej Babis's centrist party has narrowly lost the Czech Republic's parliamentary election, a surprise development that could mean the end of the populist billionaire's reign in power. With the votes from 99.7% of the ballot stations counted, the Czech Statistics Office said Together, a liberal-conservative three-party coalition, captured 27.7% of the vote, beating Babis's ANO (Yes) party, which won 27.2%. (AP Photo/Petr David Josek)

PRAGUE (AP) — Prime Minister Andrej Babis said Tuesday that the Czech Republic's president told him he was ready to give Babis a chance to form another government even though the party led by the populist billionaire placed a surprise second in the country's parliamentary election last week.

Babis and President Milos Zeman met at a presidential chateau near Prague on Sunday shortly before Zeman was rushed to the Czech capital's military hospital. The hospital said Zeman was in an intensive care unit in stable condition, but further details about his health were unknown.

As president, Zeman has a key role in establishing a new government. Although the Czech presidency is largely ceremonial, the officer-holder is responsible for choosing a political leader to try to form a government after a parliamentary election.

A liberal-conservative, three-party coalition named Together captured 27.8% of the vote on Saturday, beating Babis’ ANO party, which won 27.1%. A center-left liberal coalition received 15.6% to finish third.

The two coalitions have pledged to govern jointly. Together won 71 of the 200 seats in the lower house of parliament and the center-left alliance won 37 seats, which would give their government a comfortable, 108-seat majority.

Zeman had indicated he would first give a mandate to the leader of the strongest party, not the strongest coalition, which would give Babis a chance to try to put together a viable government.

Babis said Zeman promised to approach him “at the right moment” but declined to immediately say if he was ready to accept the president’s offer.

Meanwhile, Senate speaker said he would ask the presidential office to advise him of Zeman's prognosis to determine if president's condition allows him to carry out the duties of his office.