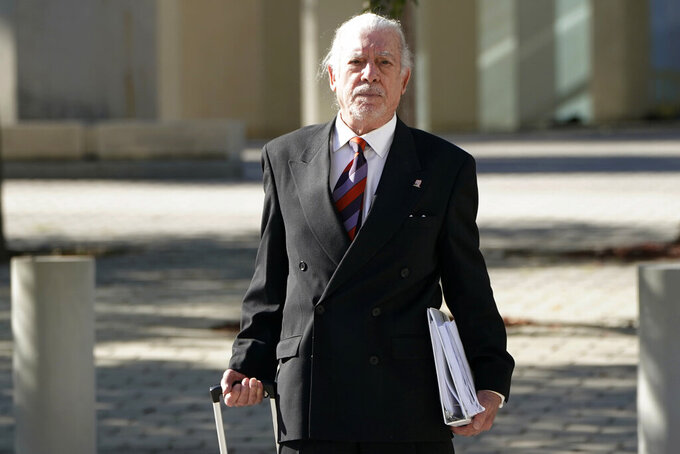 Lynne Sladky, ASSOCIATED PRESS
Roberto Guillermo Bravo, a former Argentine navy officer, leaves federal court Monday, June 27, 2022, in Miami, where he is on trial for his alleged role in a 1972 massacre of political prisoners in his homeland. The civil trial that began Monday seeks economic compensation for the damage that Bravo's alleged role in the killings caused. (AP Photo/Lynne Sladky)

MIAMI (AP) — A jury in Miami on Friday found a former Argentine naval officer responsible for a 1972 massacre of political prisoners in his homeland and ordered him to pay more than $20 million in damages to relatives of four of the victims.

The unanimous verdict of the seven jurors was delivered against Roberto Guillermo Bravo, 79, who has lived in the United States since 1973.

The families filed the civil case against Bravo under a U.S. law that allows judicial action against residents of the United States for acts allegedly committed elsewhere.

Bravo remained calm as he heard the verdict in the courtroom, while two of the relatives listened in tears.

“I’m happy for them,” Bravo told The Associated Press as he left the courtroom.

He had been the only former Argentine military officer accused of taking part in what is known as the Trelew Massacre who had not faced justice. Three other officers were convicted in Argentina and given life sentences.

Bravo and other military officers allegedly shot to death 16 unarmed political prisoners and seriously wounded three others at the Trelew military base in Patagonia in the early hours of Aug. 22, 1972, according to the complaint filed in the U.S. case.

The official version of events claimed the political prisoners were killed during a shootout while trying to escape, but after Argenina's return to democracy in 1973, the three survivors recovered their freedom and told a different story. Those three were later kidnapped and murdered by the military after a 1976 coup that ushered in Argentina’s last military dictatorship.

The four plaintiffs were relatives of Raquel Camps, Eduardo Cappello, Alicia Krueguer and Marcela Santucho. Krueguer, Cappello and Santucho were among those killed, while Camps was one of the three initial survivors.