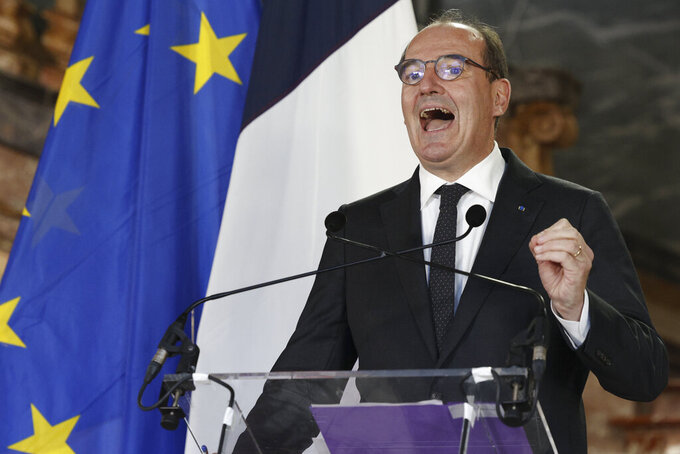 Olivier Matthys, ASSOCIATED PRESS
French Prime Minister Jean Castex gives a statement after a Belgian-French security consultation meeting at Egmont Palace in Brussels, Monday, Nov. 22, 2021. The prime minister of France, who tested positive for COVID Monday, is being singled out on social media and beyond as the prime example of what not to do in the pandemic. (AP Photo/Olivier Matthys, File)

PARIS (AP) — After testing positive for COVID-19, France's prime minister is being singled out on social media and beyond as an example of what not to do in the pandemic.

Multiple videos are circulating of a maskless Prime Minister Jean Castex vigorously shaking hands with elected officials in an enclosed space at a Paris mayoral congress on Nov. 16. Many people are pointing out that goes against France's official stance that everyone should keep taking preventative measures, especially as infections surge.

They also noted that Castex, who tested positive Monday, had called the French Caribbean territory of Guadeloupe “irresponsible” in the enforcement of COVID-19 measures when he did not abide by the rules himself.

The prime minister's office said the issue was being exploited for political ends and that he “tries to respect the rules as much as possible.”

Castex’s office says the 56-year-old prime minister tested positive after his 11-year-old daughter contracted the virus, and he is self-isolating for 10 days. Castex was vaccinated in the spring, but his daughter is not vaccinated because vaccines are not approved in the EU for those under 12. Authorization is expected this week.

Gabriel Attal, the French government’s spokesman, had leaped to Castex’s defense when the videos first began circulating. “We are all only human,” he said.

But Castex's positive test — just hours after a trip to Brussels and a meeting with Belgian ministers — is a potential embarrassment for the French government and for President Emmanuel Macron ahead of April’s presidential election.

Castex developed a mild cough overnight, but plans to continue working in isolation, an official in his office said Tuesday. Asked about the Nov. 16 event, the official said Castex washed his hands with sanitizer between each handshake.

The official also noted that a health pass was required to get into the event, which proves people are fully vaccinated, or have a fresh negative test or have recently recovered from the virus.

Experts say Castex's behavior is indicative of a wider drop in vigilance now that most of France's population has received vaccine shots. Labor Minister Elisabeth Borne warned against complacency this month, acknowledging that “maybe we have lapsed a bit, barrier measures are being less respected.”

Infections and virus-related hospitalizations and deaths are on the rise in France in recent weeks, and the government is stepping up enforcement of the health pass and encouraging people to get booster shots.

As a result of Castex's positive test, several other French ministers are self-isolating awaiting test results, including Europe Minister Clement Beaune, who deleted a photo on Instagram of him laughing with Castex without wearing a mask.

Follow all AP stories on the pandemic at https://apnews.com/hub/coronavirus-pandemic.